“Blindfolded, or severely tortured to the point of death. It is said that there have been times when you haven’t eaten food for several days.”

Citizens and rebels protesting the Myanmar coup are suffering these hardships at Insein Prison in Yangon. Yuki Kitazumi, a Japanese freelance journalist who was arrested for covering protests in Myanmar and imprisoned in the prison for about a month, told the reality of political prisoners in a recent media interview.

The New York Times (NYT) in the United States accused Insein Prison, nicknamed’Crazy Prison,’ through interviews with former prison guards and inmates on the 31st. The prison name’INSEIN’ is synonymous with insane, meaning’crazy’ in English. For this reason, it was nicknamed’Crazy Prison’. A local human rights organization estimates that 13,000 people have been incarcerated after the coup, which is more than twice the size of the appropriate prisoner (5,000 people), as the number of inmates has increased. Myanmar’s military government also released 23,000 prisoners during the New Year’s holiday on April 17th, which is said to be due to the limited number of prisoners. 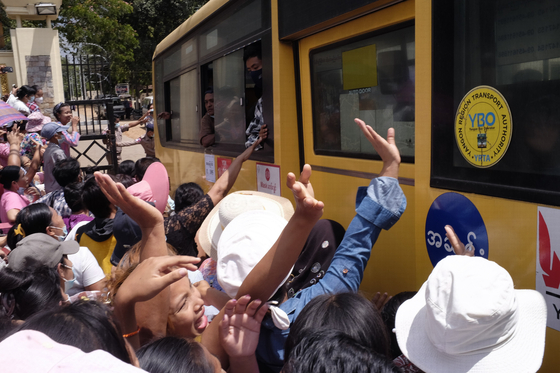 In April, when the Myanmar military government released 23,000 prisoners in Insein prison for the New Year holidays, citizens are waving their hands toward the bus leaving the prison. AP=Yonhap News

“Not only assault, but also fire and electric shock.”

This prison was built 134 years ago during the British colonial period. Then, from 1962 to 2011, during the military dictatorship for more than half a century, thousands of political prisoners were locked here. State adviser Aung San Suu Kyi was also imprisoned in Insein prison twice in 2003 and 2009.

It is particularly notorious for its poor environment and torture. Sanitation infrastructure such as sewage is also primitive, and thin blankets are all there is on the hard ground. It is common for rice to be mixed with sand and small stones. In addition to assaulting inmates, they were burned or charged with electric shocks. Some prisoners stayed in kennels. Salt was sprinkled on wounds after torture, or plastic bags were put on their heads to distract them.

Amnesty International, an international human rights organization, said that the military intelligence agency had tortured prisoners day and night in prisons in 1995. “I was beaten in shackles and sometimes beaten until I lost my mind,” he said. 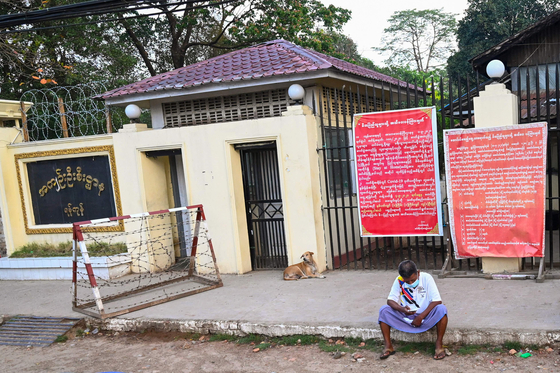 A man sits in front of Insein Prison. AFP=Yonhap News

“If even a piece of newspaper is found, torture the prisoner”

However, with the introduction of the civil government in 2015, the situation at Insein prison improved little by little. Inmates were also guaranteed to watch TV or read. However, after the military coup in February, the situation has rapidly deteriorated.

According to the Human Rights Organization’s Political Offender Support Association (AAPP), more than 4,300 people have been arrested and detained since the coup, most of them in Insein Prison. Prisoners cannot leave the cell, and TV is only allowed to watch channels designated by the military. Inmates are sentenced to medium sentences through military law meetings in prison. “There are more political prisoners now in prison than decades ago,” said Bo Chi, co-founder of AAPP. He was also imprisoned in this prison twice in the 1990s.

Faying Ye Tu, a satirical poet who was released on pardon last April after the coup, said, “The prison environment deteriorated overnight.” Said. He was imprisoned in 2019 for mocking the military generals.

“Political prisoners in Myanmar are often tortured for violating trivial rules,” said Keen Maung-min, who worked as a prison guard for 25 years at Insein Prison. I was fired,” he revealed.

Gambira, who led the democratic movement’Saffron Revolution’ in 2007, testified that her friends and brothers were assaulted by guards after spending more than six years in Insein Prison.

He is currently living in Australia, adding, “The guards hit them in front of my eyes and kicked them with one foot,” he added. “My brother has two front teeth.” At the same time, he criticized that “all prisons in Myanmar are human-made hell”, saying that human rights violations are being committed in various prisons besides this prison. They recalled that the guards injected drugs and experienced extreme pain and trembling of the body, and eventually calmed down only after receiving the antidote.

In the midst of this, as the military government’s rule of thumb is prolonged, the tyranny is getting worse as the days go by. On the 24th, the editorial week of Danny Fenster of the independent media’Frontier Myanmar’ was arrested at the airport just before departure and taken to the prison. Fansters are American, but their blades are thrown against foreigners as well.

Seok-yeol Yoon Meet Seong-dong Kwon,’Friend’ in Gangneung-seo… Demonstrating the will to challenge the president

‘I refused the marriage proposal’… Daughter of Pakistani...

Shura Council Election: Voters can be added to...

The Nanjing epidemic is thrown away, the Russian...

The fifth round of vaccination may be out...

June 26, 2021
We use cookies on our website to give you the most relevant experience by remembering your preferences and repeat visits. By clicking “Accept All”, you consent to the use of ALL the cookies. However, you may visit "Cookie Settings" to provide a controlled consent.
Cookie SettingsAccept All
Manage consent