Chinanews client, Beijing, July 22 (Peng Ningling) It has been nearly 48 hours since Zhengzhou City, Henan Province sounded the flood control level I emergency response. On the afternoon of the 22nd, the Zhengzhou City Flood Control and Drought Relief Headquarters decided to reduce the flood control level I emergency response. Grade III. The rain that lasted for many days began to weaken and tended to end, and infrastructure such as water and electricity grids were gradually restored.

How was the disaster situation in the past 48 hours?

For two consecutive days, the Henan disaster affected people’s hearts. According to news from the Henan Provincial Emergency Management Department on the afternoon of the 22nd, since the 16th, this round of heavy rainfall has caused 3.004 million disasters in 103 counties (cities, districts) in 877 towns and villages in Henan Province. 33 people died and 8 people were missing.

The province has evacuated 376,000 people from danger and resettled 256,000 people. The area of ​​crops affected was 215.2 thousand hectares, and the direct economic loss was 1.22 billion yuan.

On July 21, Zhengzhou, heavy rain caused water to accumulate in some sections of the city, and the little girl was sitting on a wooden board.Image source: Visual China

Affected by the continuous heavy rain, travel in many places such as Zhengzhou, Henan was affected to varying degrees.

On the afternoon of the 22nd, Zhengzhou City revealed that as of 10 o’clock on the 22nd, Henan Provincial Expressway opened 403 toll stations, of which 204 were in normal traffic, 193 were under control, and 6 were closed (4 were closed due to stagnant water and due to flood control. Need to close 2).

According to the Weibo news of the operation branch of Zhengzhou Rail Transit Co., Ltd., on the 20th, heavy rain caused serious water accumulation in the Wulongkou parking lot of Zhengzhou Metro Line 5 and its surrounding area. At 18:00, the accumulated water broke the entrance and exit barriers. The water wall entered the main line section, causing a train of Zhengzhou Metro Line 5 to stop in the section between Shakou Road Station and Haitansi Station, and more than 500 passengers were trapped. 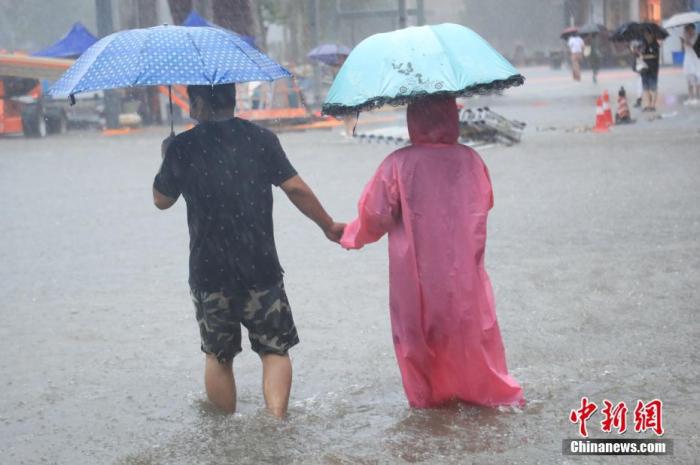 On July 20, Zhengshui, the citizens in the stagnant water supporting each other and walking hand in hand.Image source: Visual China

Affected by rainfall, the postal system has experienced varying degrees of damage to delivery vehicles and express mail. The official Weibo of the State Post Bureau revealed on the 22nd that China Post solemnly promised “three guarantees, two openings, and one exemption” in response to heavy rainfall in Henan.

The rescue continues, how about the restoration of infrastructure in various places?

After the disaster, fire fighting, power supply, communications… all rescue and support forces have rushed to help Henan. 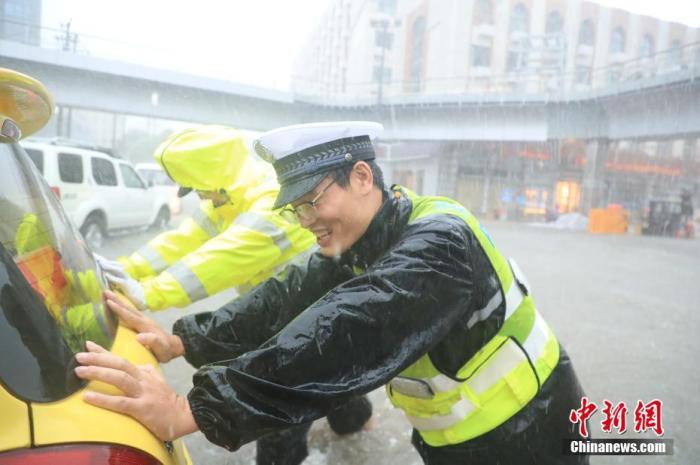 On the 21st, the Ministry of Finance has issued an emergency relief subsidy of 100 million yuan to support Henan’s flood prevention and disaster relief work. According to the State-owned Assets Supervision and Administration Commission of the State Council, the central enterprises have quickly organized the donation work on the basis of doing their best in flood prevention and rescue work. As of 12 noon on July 22, the first batch of 59 central enterprises had arranged cash donations of 686 million yuan. 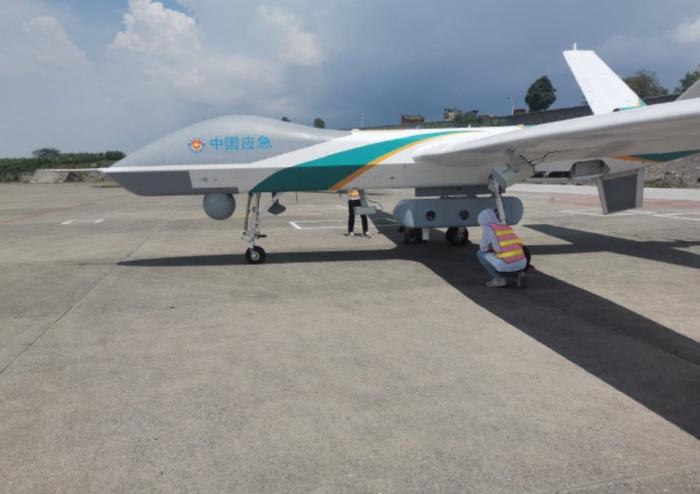 In response to the “three interruptions” situation in the disaster area, on the 21st, the Emergency Management Department urgently dispatched the Pterosaur UAV aerial emergency communication platform for a long-distance cross-regional flight, which took 4.5 hours to reach Gongyi City and entered the communication interruption area of ​​Mihe Town at 18:21 . Utilizing the mobile public network base station carried by the pterosaur drone aerial emergency communication platform, a long-term and stable continuous mobile signal coverage of about 50 square kilometers has been achieved. 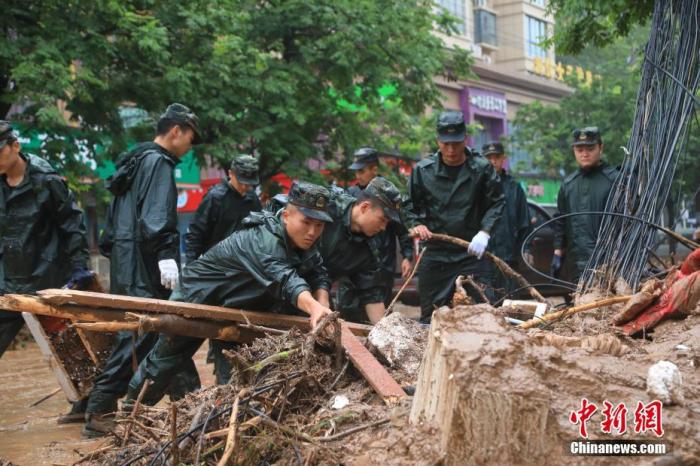 ——It is strictly forbidden to report late, conceal, or omit important flood and disaster information!

The disaster is approaching, in order to ensure fair and transparent information and timely rescue, on the 21st, the Henan Provincial Commission for Discipline Inspection issued the “Emergency Notice on Strengthening Supervision and Discipline of Flood Prevention and Disaster Relief”

It mentioned that late reporting, concealment, and omission of important flood and disaster information are strictly prohibited; for failing to seriously perform duties in flood prevention and relief work, engage in formalism, bureaucracy, leave their duties without authorization, neglect their duties, disobey orders, retreat, and shirk. Anyone who squanders or delays the opportunity and causes heavy losses to the country and people’s lives and property shall be held accountable strictly and promptly, and the names shall be reported and exposed; those who embezzle, embezzle, intercept, or squeeze funds for flood prevention and disaster relief shall resolutely comply with disciplines and laws Strictly investigate and punish, and never tolerate; for work errors that occur due to the courage to take responsibility and the courage to advance, resolutely make fault tolerance and correction.

When will this rain end?

-Rainfall in many parts of Henan gradually weakened and ended

According to statistics from the Meteorological Department, from 8 am to 14:00 on the 22nd, heavy rain or heavy rain occurred in parts of northwestern Henan, central and southwestern Hebei, and southeastern Shanxi. Local heavy rains occurred in Anyang, Jiaozuo, Xinxiang, and Jincheng, Shanxi (100 ~132 mm). However, the Central Meteorological Observatory released a message close to 16:00 in the afternoon on the 22nd, showing that in the past 12 hours, the hourly rainfall in Henan has been animated, and it can be seen that the rainfall is slowly weakening.

However, while the rain in Henan is decreasing, the rainfall in some other areas needs attention. The Central Meteorological Observatory issued a blue rainstorm warning at 18:00 on the 22nd. There were heavy rains in southeastern Shanxi, southern Shaanxi, western Hubei, and northeastern Inner Mongolia, and local heavy rains. (Finish)

Cut it in half directly! Twitch’s new subscription price is released and it drops to 77 Taiwan dollars a month | 4Gamers

Wife of the village headman of Udon Heng,...

[단독] If the house price rises and the...

Faith must be increased; India and China set...

“Mustache is a bacterial hideout” “Kyungokgo is...

May 5, 2021
We use cookies on our website to give you the most relevant experience by remembering your preferences and repeat visits. By clicking “Accept All”, you consent to the use of ALL the cookies. However, you may visit "Cookie Settings" to provide a controlled consent.
Cookie SettingsAccept All
Manage consent