Huawei Matebook 14
Although the Huawei Matebook 14 is a mid-level laptop, this screen stands out. which comes with a resolution of up to 2K with support for touch systems Multi-Touch Screen can command Multi-Gestures, such as 3 finger swipe down to take a screenshot While the chipset will get the 11th generation Intel Core i5-1135G7, the new laptop series chipset has a size of 10nm, making it fast. And save power than the previous model, the RAM is packed at 16GB, is a dual-channel, good processor. It is low latency and uses NVMe PCle SSD ROM for fast data read and write speeds. 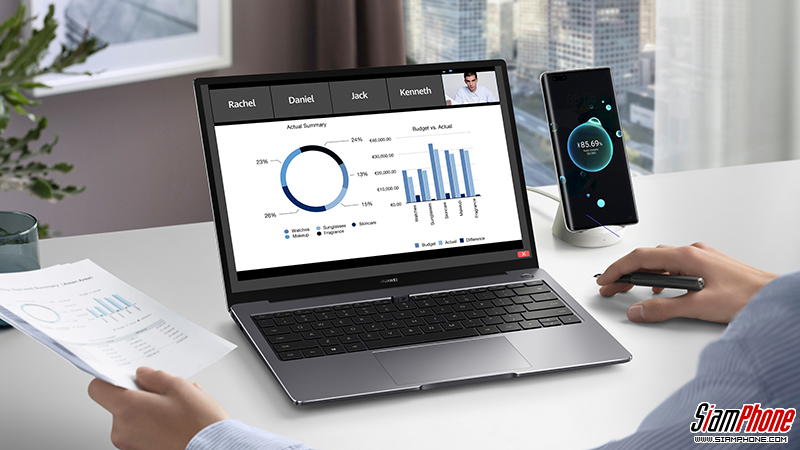 Huawei MateBook D 15
The Huawei MateBook D 15 will have two chipsets to choose from: the 11th generation Intel i5-1135G7 (same as the Huawei MateBook 14) and the 10th generation Intel i5-10210U, but the real standout is the dual channel 16GB RAM and ROM. NVMe PCle, which allows low-latency processing and fast to read and write data In addition, the outstanding feature of the Huawei Mate D 15 is the IPS panel display, FHD resolution (1920×1080 pixels), meets the eye care standard from TÜV Rheinland Certified and can spread the screen up to 178 degrees, helping to open the corner. look wider 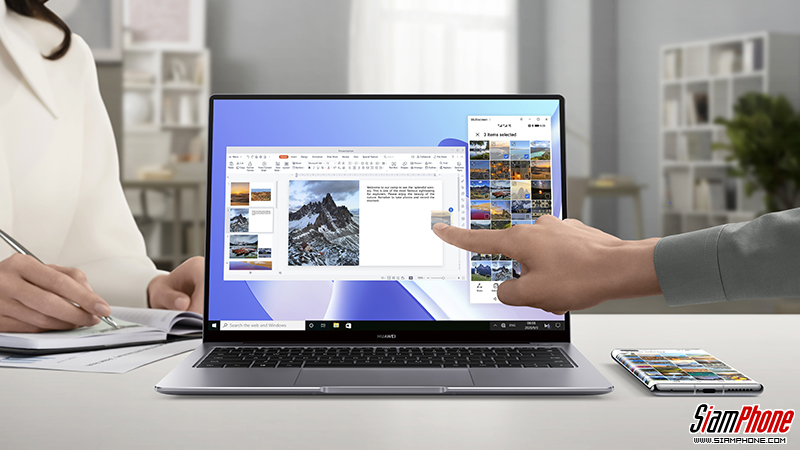 Huawei MateBook D 14
For the Huawei MateBook D14, it may be the smallest model among the 3 models, but the spiciness is still there. With a compact weight of only 1.38 kg, making it easy to carry anywhere. It also gets a sharp, FHD (1920×1080 pixels) IPS panel display that is TÜV Rheinland Certified for eye care when in use. The power is still strong. It is powered by the 10th generation Intel Core i5-10210U. 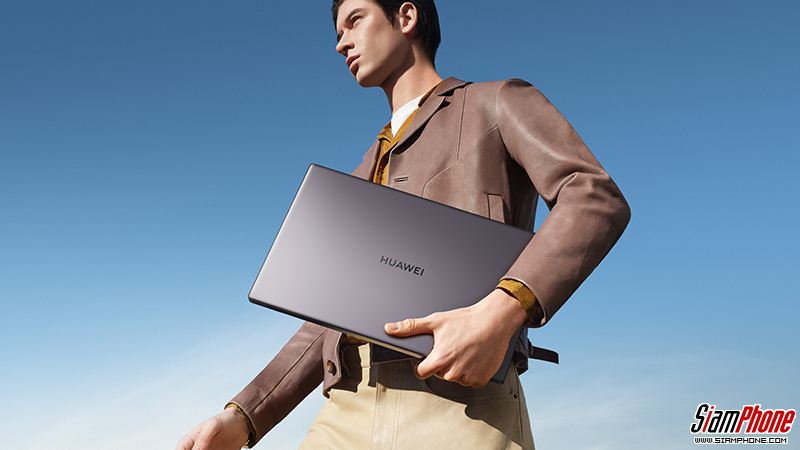 Other advantages that can be found from all 3 models
Multi-Tasking It is another work that meets the New Normal era, which all 3 models can work with Huawei smartphones running on the EMUI 10.1 operating system or above through a feature called Huawei Share 3.0. Just bring a smartphone. Place it on the Touch Pad dock and the smartphone’s screen will appear on the laptop screen. and can be used to control immediately via laptop 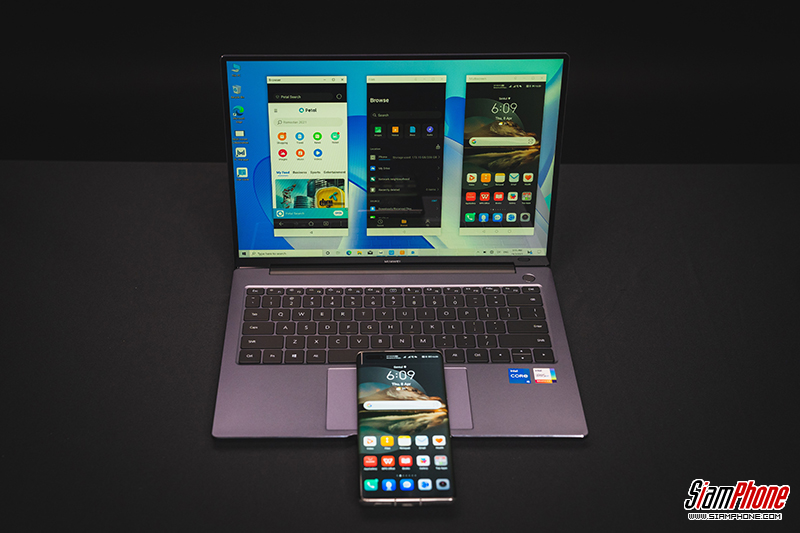 There is also Fingerprint Power Button or fingerprint scanning on the power button, as well as a recessed front camera that is easy to use, just press the button between F6 and F7, which increases privacy. and safety for users 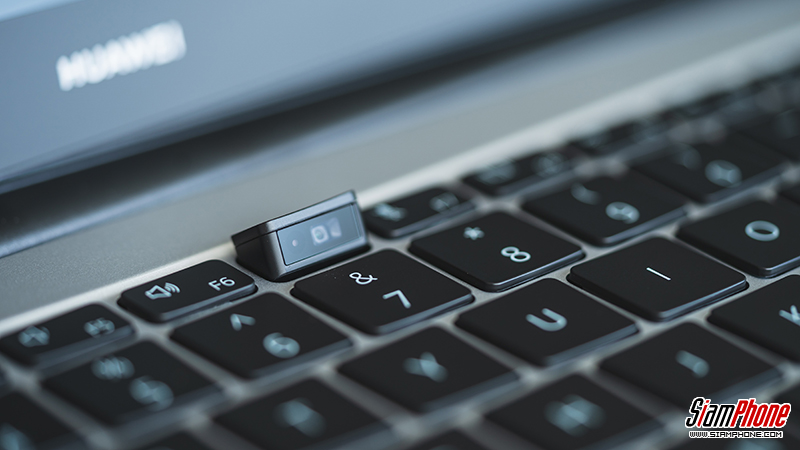 Price and Availability
Huawei MateBook Family 2021 can be purchased from today onwards. But if pre-orders from 28 to 27 April 2021 will receive many premium gifts. More details can be found on the Huawei Online Store and JD.com. 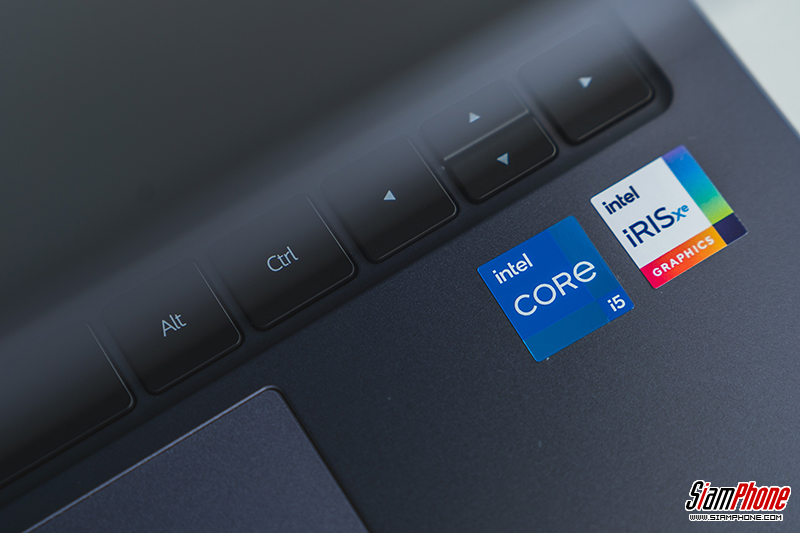 Over 410 billion yuan in less than half a year! A-share listed banks have significantly increased their equity financing

What happened? Kan posted a sad post about ‘Sek’ saying don’t listen to what anyone says. I want to hear “love”

The Japanese version of the off-road racing game...

Vol.13 Interview with SMODE JAPAN. What is the...

Sales of about 550 million yen were recorded...

Are all AAA titles with VR options?Report that...

June 24, 2021
We use cookies on our website to give you the most relevant experience by remembering your preferences and repeat visits. By clicking “Accept All”, you consent to the use of ALL the cookies. However, you may visit "Cookie Settings" to provide a controlled consent.
Cookie SettingsAccept All
Manage consent