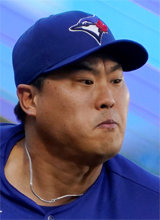 Recovery from partial surgery is quick, but even if it takes time, I don’t think I’ll be able to play for more than a year by choosing a full reconstruction.

Ryu Hyun-jin (35, Toronto, photo) underwent so-called ‘full Tommy John’ surgery, in which all the damaged elbow ligaments were removed and a new tendon was transplanted. The surgery went well, but it will take at least a year or more before he recovers and returns to the mound.

On the 19th, Canadian media Sportsnet reported that “Ryu Hyun-jin underwent Tommy John surgery on his left elbow.” Ryu Hyun-jin had surgery the day before, and all of the damaged ligaments in his left elbow were removed. Keegan Matheson, a Toronto correspondent of MLB.com, the official media of the MLB, tweeted, “(Hyunjin Ryu’s surgery) is a ‘full Tommy John’ that completely removes the ligament and then rebuilds it. He said the operation was successful.”

Hyunjin Ryu and the Toronto club decided to have elbow surgery around the middle of this month, but have been thinking about whether to remove only part of the damaged ligament or remove all of it. If only a part of the ligament is removed, the rehabilitation period is relatively short, and the time to return to the mound can be advanced by that much. However, Ryu Hyun-jin chose to completely rebuild the ligament. Even if it takes more time, he is willing to take care of it properly.

It seems that Ryu Hyun-jin will be able to return to the mound at the earliest until mid-to-late next season. MLB.com predicted that “Toronto will have to play without Ryu Hyun-jin for at least a year.” Canadian media TSN reported that “rehabilitation after Tommy John surgery usually takes 12 to 18 months.” Justin Verlander (39, Houston), who is tied for the most wins (8 wins) as of the 19th in MLB this season, underwent Tommy John surgery in September 2020 when he was 37 years old, and was held on April 9 this year, about a year and seven months later. He made his comeback game against the Los Angeles Angels.

Read Also  Only those who have been vaccinated for 'Autumn Baseball' can enter... Chimaek is OK