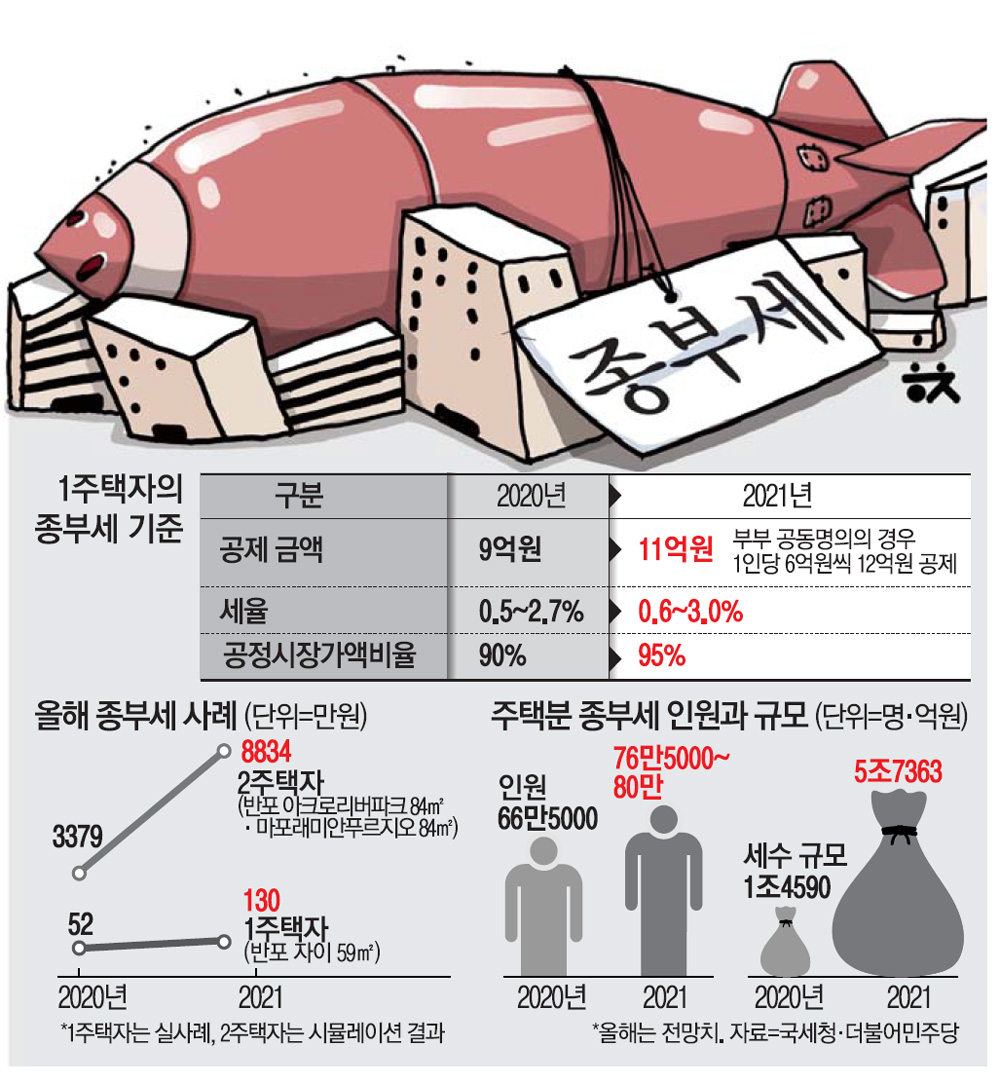 Although the burden of comprehensive real estate tax (special property tax) for one household per household has been eased since this year, all factors affecting property tax, such as published prices, have risen sharply, and there are many cases of property tax bombs being hit. In addition, the Monetary Policy Committee of the Bank of Korea, scheduled for this week, is expected to raise the base interest rate, leaving homeowners with a heavy burden of loan interest to sleep at night.

On the 21st, inside and outside the government, there is an atmosphere that the number of people subject to property tax this year will increase significantly from last year due to a surge in real estate prices, and the number could exceed 800,000. This is an increase of more than 100,000 from the 665,000 people who paid the final taxation last year. The National Tax Service will send out a tax notice on the 22nd. It is known that hometax can check from the 22nd, but some taxpayers shared the results of their search online saying that they can check it even on a holiday day. Reporting and payment are from December 1st to 15th.

The reason why the number of beneficiaries has increased significantly despite the relaxation of the single-homeowner taxation is that the tax burden for single-family owners as well as multi-homeowners with high-priced homes has risen sharply as the published price, fair market value ratio, and property tax rate, which are factors that determine the property tax, have all risen.

The tax base is calculated by subtracting the basic deduction amount from the announced housing price and multiplying it by the fair market value ratio.

However, the national average public housing price rose 19.08% this year, the largest ever, and the fair market price ratio also increased from 90% last year to 95% this year. In addition, the tax rate applied to multi-family dwellings in the area subject to the adjustment has been raised by nearly double from 0.6 to 3.2% to 1.2 to 6.0%, and the general tax rate for the property tax has also increased from 0.5 to 2.7% to 0.6 to 3.0%. Because of this, owners of high-priced houses, even single-family homeowners, have to pay a tax of tens of millions of won, and some owners of two or more houses in Seoul have to pay a tax of hundreds of millions of won.

Experts are concerned that the property tax is not only applicable to the 2% of the population, but could adversely affect the real estate market as a whole. Shim Gyo-eon, a real estate professor at Konkuk University, said, “Politicians believe that only 2% of the population is affected by the property tax, which is an illusion. It is expected that the monthly rent for cheonsei will accelerate in a situation where the price is high.”

Lee Seung-cheol, senior real estate consultant at Yuanta Securities, said, “It seems unlikely that multi-homeowners will go to the market just because the tax has been raised because it was already expected. “I think the tax will move accordingly, and there is a strong wait-and-see attitude to ‘let’s hold on’.”

In fact, among those subject to the property tax, there is a lot of talk that they will prepare for the property tax by raising the monthly rent rather than disposing of the house. One person subject to the taxation raised his voice, saying, “If people with multiple houses are to be treated as criminals like this, force them to own only one house by law.”

If the tax rate is a ‘fire on the instep’, then the central bank rate hike by the Bank of Korea (BOK) on the 25th could increase wrinkles in the household economy in the mid- to long-term.

The BOK strongly hinted at an additional rate hike at the MPC meeting in October, and even after that, BOK Governor Ju-yeol Lee continued to send signals to the market to raise the key rate. The market also believes that an increase in the base rate is inevitable even to catch inflation, which is skyrocketing due to rising international oil and raw material prices.

However, considering that the re-spreading of COVID-19 in winter can act as a downside to the economy, such as the recent surge in the number of confirmed cases per day to 3,000, and supply-side inflation factors such as a global supply bottleneck are strong, the rate of increase in the base rate is 0.25 percentage points. It is the dominant view.

Won/dollar exchange rate weakened… Up and down...