International Atomic Energy Agency (IAEA) Secretary-General Rafael Grossi analyzed North Korea’s nuclear facilities, saying, “(North Korea) is doing everything possible in every imaginable area.” Following the statement at the IAEA General Assembly last month that “North Korea is carrying out work on plutonium separation, uranium enrichment and other activities (for nuclear weapons) at full steam ahead” to have been warned.

In an interview with Washington on the 21st (local time), Secretary-General Grosi was concerned, saying, “Compared to 2009 (when nuclear inspections were stopped), (North Korea’s nuclear facilities) have become more advanced and geographically expanded.” House Speaker Nancy Pelosi also said in a video conference on the same day that “North Korea is transferring weapons of mass destruction technology to other countries.”

Despite concerns about North Korea’s nuclear facilities, South Korea and the United States continue to keep in touch with each other to declare an end to the war. The US State Department’s special representative for North Korea, Sung Kim, will visit Korea on the 23rd and hold a meeting the next day. At the meeting five days after the meeting in Washington, the chief representatives of the Republic of Korea and the United States are expected to continue the discussion related to the declaration of an end to the war. A government source said, “The results of this meeting with Kim will serve as a test bed to gauge the US position.”

“U.S. is considering pros and cons of end-of-war declaration proposal” 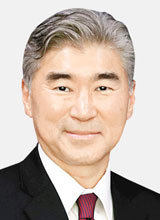 The ROK and the US are of the position that dialogue with North Korea is necessary even in order to escape from such a North Korean nuclear threat. It is expected that the US State Department’s special representative for North Korea, Seong Kim (pictured),’s visit to Korea on the 23rd will advance discussions such as the declaration of an end to the war and promote negotiations with the North. However, there are also concerns that diplomats will only be swayed by North Korea if negotiations with North Korea begin in the future if they rush to dialogue while neglecting the North Korean nuclear threat.

At a seminar held by the US think tank Stimson Foundation on the 21st (local time), Secretary-General Grosi said, “The reactor has been restarted and plutonium separation (extraction) is in progress” regarding North Korea’s nuclear facilities such as Yongbyon. , there are signs that other facilities are also operating.” North Korea has begun operating its nuclear facilities in all directions. “The verification and protection work we will face in the future will be huge,” he predicted.

House Speaker Nancy Pelosi also pointed out at a meeting hosted by the ‘Flo Shares Fund’, saying, “The reason North Korea is boasting about its technology is because it wants to sell it (weapons of mass destruction, etc.).” The U.S. Center for Strategic and International Studies (CSIS)’s North Korea-related website, Beyond Division, evaluated that “North Korea has the capability and resources to test additional SLBMs or launch its first SSB at any time.”

Despite the North Korean nuclear threat, South Korea and the US authorities are holding meetings one after another to resume dialogue with North Korea. This month alone, Blue House National Security Office Director Suh Hoon visited the U.S. (12th), CIA Director William Burns visited Korea (14th-15th), South Korea-U.S.-Japan nuclear chiefs in Washington (16-19th), and South Korea-US-Japan intelligence chiefs meeting ( 18-19) and so on. Diplomats also sense the expectation that President Kim’s visit to Korea on the 23rd will serve as a decisive catalyst for this series of flows. In particular, the key question is whether the US responds to President Moon Jae-in’s proposal for an end-of-war declaration brought up again at the UN General Assembly. Earlier on the 18th (local time), Chairman Kim met Noh Gyu-deok, head of the Korean Peninsula Peace Negotiation Headquarters in Washington, and said, “We discussed the declaration of an end to the war. We look forward to continuing this discussion in Seoul later this week.”

According to multiple diplomatic sources, the diplomatic and security line on our side mobilized and contacted the United States, and as a result, the United States has reached the level of reviewing the pros and cons of the proposed end-of-war declaration. A government source said, “It is true that the United States has turned to a more flexible atmosphere in the declaration of an end to the war as it needs an ‘entrance’ for dialogue.” The National Security Council (NSC) Standing Committee also held a meeting presided over by Chief Executive Officer Seo on the 22nd and said, “We discussed ways to engage with North Korea, including the issue of an end-of-war declaration.” General Noh also attended the meeting.

Arsho said he was not at the place; Yes, the complainant said he called her by name SFI AISF clash | MG University | AISf Woman leader Complaint

Anthony Fauci: Omicron is not more serious than...

The friendship between Biden and Xi: If...