If you don’t have it, you’ll be’big hit’, if you’re pardoned, if there’s’empowerment’…

The government has decided to significantly increase the amount of housing supply by intensively developing old residential areas such as subway station areas and reconstruction with the public initiative. The photo shows a villa cluster area from Seoul Sky, the observatory at Lotte World Tower, Songpa-gu, Seoul.[뉴시스]

# Lee Mo, a member of the reconstruction union in Gangbuk, Seoul. The measures announced by the government on the 4th are attractive, but it is difficult to determine what to do. The government said it would guarantee faster business speed and higher profitability than before, instead of implementing it directly by the public.

Lee said, “It is only when the property value increases after completion, but it is not easy to compare with the method that the private sector has done so far.”

# Park Mo (Seoul) in her early 40s, who was looking for an apartment to buy an apartment as the price of the house kept falling and the house price kept rising. The government decided to postpone the purchase of homes due to unexpectedly large amounts of supply and lowering the subscription threshold.

Mr. Park said, “Wouldn’t it be better to wait for new supplies that will increase the chances of winning than to live because of the surge in house prices?”

After the 2nd and 4th Measures, which is a massive housing supply expansion plan by the Minister of Land, Infrastructure and Transport Byun Chang-heum, stakeholders in the housing market are busy weighing. This is because this measure has a wide range of impacts not only for public-led development targets, but also for homeless and multi-homed people in other regions. The subscription system for general sales, excluding the share of the residents of the business area, will change, and the trading market environment will change due to the strengthening of anti-speculation measures.

The’Lottery Sales Market’, which has a larger margin in market price, will be opened. Even now, much cheaper pre-sale prices are lower than the surrounding market prices. This is because the land area ratio (ratio of the total floor space of the building site to the project site) to increase business feasibility is reduced, reducing the amount of land required to build a house of the same size. If the large land lot is small, the price of the general pre-sale price, which combines the land price and construction cost, decreases. 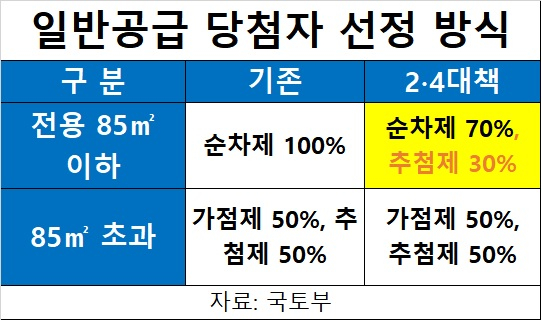 With the reduction of the floor area ratio, the number of built-in households increases, and general pre-sale is increasing.

Young-jin Ham, head of Jikbang’s Big Data Lab, said, “The pre-sale price is cheap, the quantity of goods has increased, and the threshold is lower, so it is worth looking forward to if you are a homeless person.”

When participating in the public direct implementation maintenance project of this measure, the residents hand over the existing house to the public as an appraisal amount. Similar to the existing cooperative business method, the size and floor of the house in newly built apartments is given priority over general sales (priority supply right). Prices are cheaper than general pre-sale prices subject to the cap.

Priority supply rights cannot be sold until occupied, and are not subject to the maximum 10-year resale limit and the 2–3 year residence obligation of the upper limit general pre-sale.

An official from the Ministry of Land, Infrastructure and Transport said, “The 10~30% additional profit guarantee announced in the countermeasure will be reflected in the pre-sale price of the right to supply, which is cheaper than the general pre-sale price.” 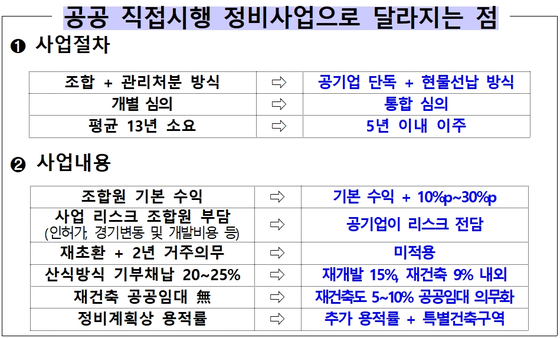 Even with these carrots, it’s a bit fuzzy in Gangnam, where reconstruction is urgently needed to stabilize house prices.

An official from the maintenance industry said, “In Gangnam, where’luxury apartments’ are emphasized, they are reluctant to implement the public.”

An official from the Gangnam Reconstruction Association said, “The key is whether we can build a decent house rather than economic benefits such as exemption from reconstruction charges.”

The Ministry of Land, Infrastructure and Transport announced plans to supply 320,000 households in Seoul, with 25% of the existing reconstruction and redevelopment associations expected to participate in Seoul. Without the union’s active participation, countermeasures will be disrupted.

After buying the wrong house in the old residential area, he saw a frustration and caught an emergency in the’exit strategy’ for multi-homed people. This is because the trading market is expected to be paralyzed by the government’s high-strength anti-speculation measures.

The Ministry of Land, Infrastructure and Transport has decided to designate the development area under the second and fourth measures as a land transaction permission area. It is expected that a permit must be obtained to trade land (including large land lots) over 18㎡ in a residential area.

In addition, the Ministry of Land, Infrastructure and Transport has decided not to give priority to real estate acquired after the announcement date (4th). They are subject to cash settlement, which cannot receive new apartments and shopping malls.

An official of the Ministry of Land, Infrastructure and Transport said, “This is to prevent reckless speculation that expected development in areas where development is expected.”

The problem is that there can be indiscriminate regulation before the development area is determined. This is because it is widely applied in areas where redevelopment and reconstruction are promoted, as well as in old residential areas such as station areas.

Deputy Minister of Land, Infrastructure and Transport Yoon Seong-won appeared on the radio on the 5th and said, “We have a list of 222 candidates.”

If you buy a house in an area that is not a candidate site and later designate it as a development area, you will only receive cash and come out. End users who actually live or want to get a new apartment in sale can be harmed in good faith.

Park Il-gyu Law Firm’s representative attorney Jo Woon said, “There may be a possibility of infringement of property rights due to overregulation,” he said.

As the purchase tax for homes in the aged area plummets, the sale is also blocked. Since this year, the tax and transfer tax have been strengthened, leading to an increasing number of multi-homeowners who are considering disposal. There are many houses owned by multi-homed people in old dwellings.
Heo Yun-kyung, a research fellow at the Korea Institute of Construction Industry, said, “We need to supplement the system to prevent the market crunch and protect real demand.”

Park Won-gap, a senior real estate expert at Kookmin Bank, predicted that “if the old housing market stagnates, demand may shift to the new housing market.”

Expert Commissioner Park Won-gap pointed out, “If the government cannot supply housing inexpensively and in large quantities within a short period of time as expected, everyone will become a painful’hope advisor.” Reporter Ahn Jang-won [email protected]

Rumor has it that the mainland may issue...

The sixth part of “Heroes of the Holy...

When the world has to live with covid!!...

LG Electronics takes the lead in building a...

CPF continues to deliver food from the...