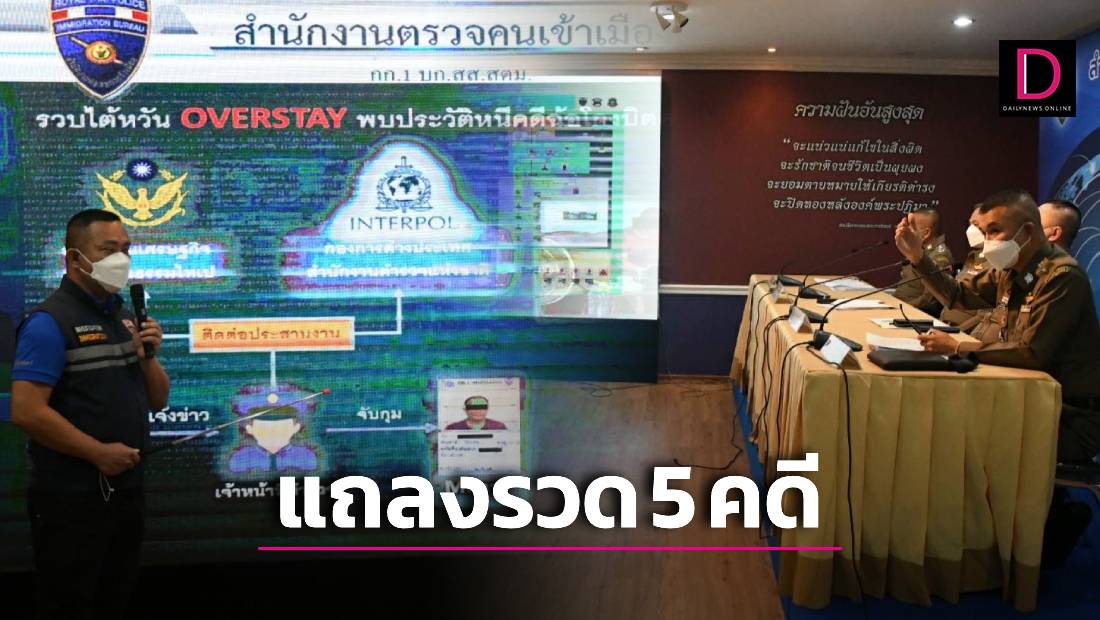 The first case was the arrest of Mr. Ritesh (last name reserved), British nationality. The accused on the arrest warrant for drug cases in the United Kingdom They were arrested at a luxury villa in Phuket.

Pol Maj Gen Thanit revealed that due to the NCA (National Crime Agency), the United Kingdom Coordinated to the Royal Thai Police (Sq.) that Mr. Ritesh has taken the information of a British victim to make a passport. In order to flee the country from drug cases, the Royal Thai Immigration Bureau investigated until it was discovered that Mr Ritesh was hiding in a luxury villa in Phuket, so he was able to track down and arrest him. Investigation Mr Ritech pleaded guilty. therefore control the operator accordingly The Immigration Act will continue.

The next case was the arrest of Mr. Zhang (last name preserved), Taiwanese nationality, on the charge of “being an alien in the Kingdom with valid permission” and the accused under an arrest warrant from the Taipei Prosecutor’s Office No. 4055 dated December 26, 2019, on the charge of “fraud”. He can be arrested at A house in Soi Aphasiri Samsen Nok Sub-district, Huai Khwang District, Bangkok

Pol Maj Gen Thanit revealed that as a result of the Immigration Investigation Investigation Board 1 was notified by agents that he saw a man with a similar appearance to the suspects of the Taiwanese authorities. which commits fraudulent transactions with bitcoins Therefore, it was investigated until it was found that Mr. Zhang was the person the Taiwanese authorities wanted. from bitcoin trading fraud case amounting to more than 200 million Taiwan dollars or 234 baht, living in the area of ​​Soi Aphasiri Samsen Nok Sub-district, Huai Khwang District, Bangkok Ready to be sent to the Bureau of Immigration for further prosecution.

The last case was the arrest of 109 migrant workers fleeing to the city in Prachuap Khiri Khan provinces, Songkhla provinces and Narathiwat provinces. 19 people were arrested and 13 vehicles were seized and 28 mobile phones were seized.

Lt. Gen. Pakpoomphiphat revealed that since on June 1, The police received a report about the body of Mr. Maddon Binson, 40, an employee of the Provincial Electricity Authority’s construction company. Died in a scrub forest near a golf course in the area of ​​Ban Phru Subdistrict, Had Yai District, Songkhla Province, where the area is a shelter for migrant workers who will travel to Malaysia Officers of the Provincial Police Investigation Unit 9, the Songkhla Provincial Investigation Division, the Songkhla Immigration Investigation Unit and the Immigration Investigation Unit 6, therefore, investigated the criminals until they were able to arrest 109 Myanmar nationals fleeing into the city. related to the aforementioned murder at a rented house not far from where the body was found. The investigation also found that all Burmese travel through natural channels Prachuap Khiri Khan Province by paying approximately each broker 50,000-60,000 baht, then will stay together before leaving the country through the channel Narathiwat

Lt. Gen. Pakpoomphiphat said that after the arrest The movement stopped for about 3 weeks and then resumed. Until the authorities were able to expand the arrest results of a group of aid workers fleeing to the city, totaling 19 people, as well as seized 13 vehicles, 28 mobile phones. 14,000,000 baht

In addition, the Immigration Bureau also arrested Mr Mohan (last name), 58 years old, Indian nationality. from changing the name and date of birth and requesting a new passport to avoid the Blacklist when traveling to Thailand because he could not bear to think of his Thai wife They were arrested in the area of ​​Klaeng District, Rayong Province, and arrested two Iranian men for patrolling the money-exchange scam at Tha Mai Market, Chanthaburi Province before filing charges. “Together Fraud”