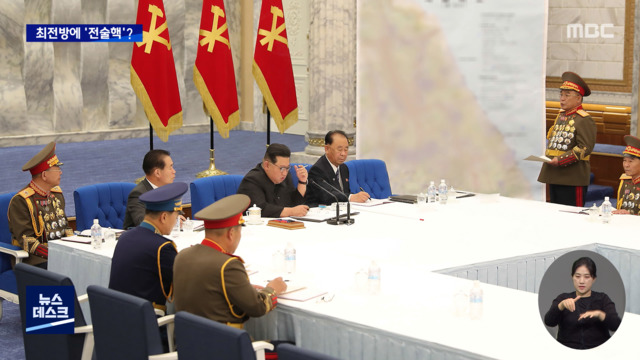 The image of Chairman Kim Jong-un receiving a report on the operation has been made public with a map drawn on our east coast hanging in front of it.

It was at a meeting that made such observations as to whether it was decided to deploy small nuclear bombs, or tactical nuclear weapons, to the forward forces, and it seems that the contents of the meeting and the photos released were all intended to put pressure on us.

Reporter Kwak Seung-gyu will tell you.

This is the second meeting to determine the direction of North Korea’s defense policy.

A map appears, depicting the entire East Coast of Korea.

A military official points to this map and explains it to Chairman Kim Jong-un.

This is a map of the coastline from Wonsan to Pohang. In another photo, you can see the red line on the map.

Specific details, such as the location of the North Korean military, were covered with a mosaic.

“Comrade Kim Jong-un is the Party Central Committee, which is taking important military measures to enhance the operational capabilities of front-line units…”

North Korea added a new operational mission to its forward forces and, in particular, was discussing amendments to the operational plan, and even wrote the word ‘planning’ targeting South Korea.

“I analyze that the (North Korean military) general chief of staff directly unfolds our map and talks about it as an intention to pressurize the South.”

The new mission North Korea refers to seems to mean the operation of a new short-range missile that North Korea announced in April that it would be deployed to an artillery unit.

Read Also  The Blue House: The DPRK-ROK relations should not be too hasty and should strengthen the communication between South Korea and the United States_韩朝

Since North Korea claimed the missile was capable of carrying a small tactical nuclear warhead, the map exposure is ultimately observed as a nuclear force pressure on South Korea.

It is very unusual for North Korea to hold a meeting of the Central Military Commission of the Party on the third day, and attention is paid to whether mention of the 7th nuclear test will be made as soon as the meeting is over.

This is Kwak Seung-gyu from MBC News.