In the end, a melee battle over ‘competition acting theory’?

Song Young-gil, chairman of the Democratic Party, will hold a meeting of the Supreme Council on the evening of the 20th to discuss the theory of postponement of the election. “It is not easy to make a decision right away whether to postpone or not,” said a member of the Democratic Party’s supreme council. “There is a possibility that the decision will be made in the direction of extending the timing of the National Assembly.” Reporter Woo Sang-jo

The tension between the contestants and Lee Jae-myung-gye reached a climax when the undisclosed supreme committee to discuss the presidential election schedule was announced for the night of the 20th. Former Democratic Party leader Lee Nak-yeon and former Prime Minister Chung Sye-kyun opened a united front, while Gyeonggi Governor Lee Jae-myung supported Bae Bae.

The focus of the conflict was on whether to bring the issue of postponement to the party committee at the end of June. “The election of presidential candidates must be done by 180 days before the presidential election day. However, if there is a good reason, it may be decided otherwise by the resolution of the Party Affairs Committee.” The Party Affairs Committee is the party’s final decision-making body, with about 100 members, including the party leadership as well as the mayor/do governor and city/provincial party chairpersons belonging to the party.

In a statement on the morning of the same day, Democratic Party lawmaker Cho Seung-rae, spokesman for the camp Chung Sye-kyun, said, “The correct way is to discuss (the postponement of the contest) at the general assembly and hold the party affairs committee in June according to the party constitution and party rules.” ) is the first test of fair competition management ability.” Rep. Oh Young-hoon, spokesperson for Lee Nak-yeon’s camp, said on the same day, “The party leadership is demanding that the general meeting be held with an open attitude.” We make it clear that this is an undemocratic decision that directly ignores the party rules.”

On the 18th, after the two factions turned the board to demand the convening of a general meeting of the National Assembly to discuss the postponement of the primary, they insisted on “referring to the party committee,” raising the level of pressure on the Song Young-gil leadership. Lee Jae-myung-gye, who said, “The postponement of the primary election is not even the subject of discussion at the National Assembly” (Rep. Min Hyung-bae on the 18th) took a step back and drew the marginal line, “The parliamentary consent is not allowed, the party committee is impossible.

Rep. Lee Jae-myung-gye, Kim Byung-wook, on Facebook on the 20th said, “I’m worried about what the public will think of the party’s showing that the party’s constitution, the party constitution, is turned upside down.” It can be achieved when it is a serious matter.” Another key lawmaker, Jae Myung-gye Lee, said in a phone call with the JoongAng Ilbo that day, “The expression of conflicts over rules at the National Assembly itself is negative for the party, but I understand the leadership’s position that cannot turn its back on the demands of more than 70 lawmakers.” You can speak freely, but it can never be a matter for a resolution by the National Assembly, and it is absurd to refer to the party committee.” Opinions are gathered, but the intention is that the party leadership should decide to ‘start the July primary and finalize the candidates in September’.

President Song, who was trying to settle the issue of postponement of the presidential election at the Supreme Council on the 18th, was pushed back by the soft market situation and delayed the decision by listening to the opinions of the presidential candidates for two days. On the 19th, I called the Big Three one after another and had an interview with Gangwon Governor Choi Moon-soon and Rep. Park Yong-jin. Governor Lee reiterated his position that “we have to follow the rules”, and it is said that former President Lee and former Prime Minister Jeong conveyed their intention to “convene a parliamentary session to fully hear the opinions of the legislature.” 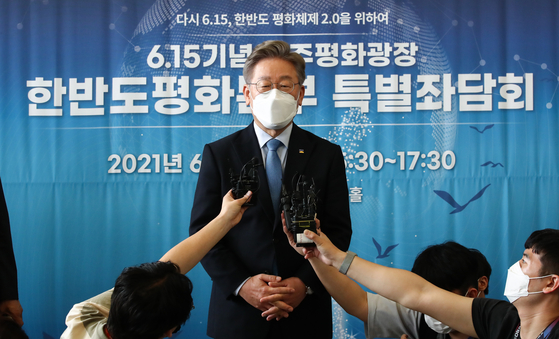 Gyeonggi Governor Lee Jae-myung, the number one passport runner, met with Song Young-gil in person in the middle of this month and expressed his opinion that the contest should not be postponed. An official from Gyeonggi-do said, “If the direction is gathered from the highest level on the 20th to ‘Holding the National Assembly’, the governor will issue a new message about the non-smokers.” By Oh Jong-taek

There are three main paths that Song can choose. ▶ Confirmation of the schedule for the 20th supreme council elections ▶ Collect opinions from the general assembly after the leadership is confirmed ▶ After the parliamentary meeting, the party affairs committee will be called, etc. Some in the party also predict that CEO Song will strengthen the governor’s principle of principle and decide to stick to the schedule. Governor Choi Moon-soon, who has been advocating for the postponement of the contest, met with reporters on the 20th and said, “(In an interview with CEO Song) I got the feeling that the contest was decided to go as planned.”

Rather, attention is focused on how former Prime Minister Jeong and former CEO Lee will respond if Song decides to hold the primary election as scheduled. This is because it is expected that the party may continue to request the convening of the party committee even after the leadership announces its position, but it will not be of any benefit. A re-elected member of the Democratic Party said, “Even now, there is no guarantee that the majority of the members of the party committee will postpone the primary. did. 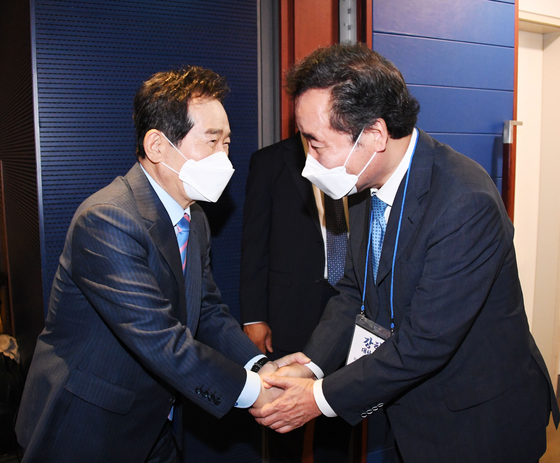 Former Prime Minister Chung Sye-kyun (left) and former CEO Lee Nak-yeon proposed to CEO Song Young-gil to hold a parliamentary session on the 19th to discuss the theory of postponement of the election. By Oh Jong-taek

In that case, it is difficult to predict at the moment the possibility that former President Lee or Prime Minister Jeong will be super strong, such as not attending the primary. A close aide to the former prime minister also said, “We are not considering breaking the table at all.”

In the event of a free discussion at the general assembly of members of the House of Representatives, it is a matter of utmost concern what kind of opinions the members of the Neutral Zone, who have not yet been listed in the camp, will have.

Rep. Cho Eung-cheon, who has been advocating for neutrality in the primary, said on Facebook on the 19th, “(People are indifferent to the theory of postponement of the contest) or sneering at him saying, ‘Things don’t work, so they’re trying to change the rules again’, either.” joined the smoke agnosticism. Another Neutral Zone lawmaker said, “There is no collective will among the neutral lawmakers. The atmosphere will only be known when the National Assembly is open.”