Industrial Bank of Korea… Director Heung-guk Park Mi-hee “I have an idea, but I won’t mention it”

The start was good. Heungkuk Life, which boasted strong firepower, maintained its lead in the league with consecutive victories.

With the onset of winter, the signs of anomalies began. The problem arose due to the friction between Kim Yeon-kyung and Lee Da-young.

Kim Yeon-kyung was honest. In a post-game interview with IBK Industrial Bank of Korea held at his home on December 18 last year, he said, “Many stories have gone out, and I have actually been contacted.”

It didn’t end there. Kim Yeon-kyung said, “But we are professional players and we have to win by game.

On that day, coach Park also said, “Every team has messy things,” and “It’s okay now.”

However, soon after the twin sisters’ school violence controversy broke out in middle school, Heungkuk Life was not free from this problem until just before the start of the season. 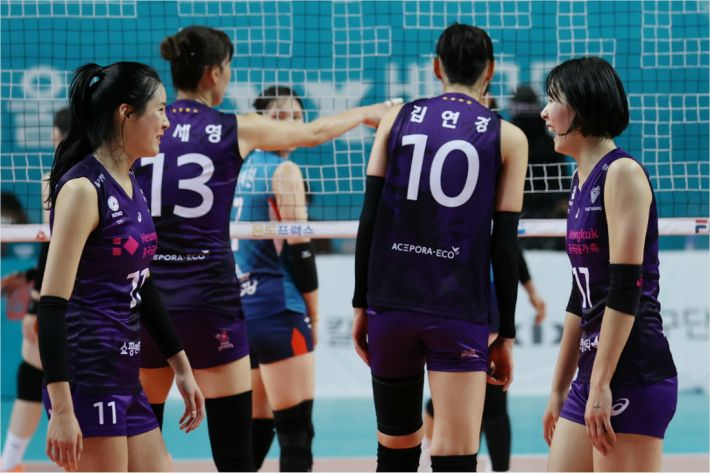 A file photo of the game scene of the Heungkuk Life players on October 22, last year. yunhap news
About a year later, this time, there is a commotion at IBK Industrial Bank of Korea. This time it is a conflict between the team and the coach.

IBK fired the director and general manager to close the situation, but it seems to be spreading into a game of truth.

Coincidentally, Heungkuk Life’s first match was the first game after IBK fired former manager Seo Nam-won and switched to acting as manager Kim Sa-ni. On the 23rd, the Incheon Samsan Gymnasium was crowded with reporters who had gathered to hear the position of IBK.

Originally, the visiting team coach would interview the reporters first, but Heungkuk Life Insurance Manager Park started first, considering that the Q&A would be lengthy. He ended the interview as soon as possible, saying, “I think the most reporters have come since then (the twin sister school violence controversy).”

Manager Park, who did not specifically mention before the match, expressed his position on the matter very carefully after the match.

Director Park continued, “I didn’t leave the field (the IBK incident) and I don’t think it’s my judgment because it’s external,” he said, “I have a personal opinion.”

This situation may have been foreseen. Although women’s volleyball has grown in popularity since the Tokyo 2020 Olympics, the V-League court is still a thing of the past.

“It looks gorgeous and good on the outside, but the inside is rotten and stale. The bigger the bowl, the bigger it can hold, but it feels like we can’t even fill it to the fullest.”

Kim Yeon-kyung left a meaningful message on her Twitter on the 22nd. The target was not pointed out. But maybe they’re looking through our V-League.