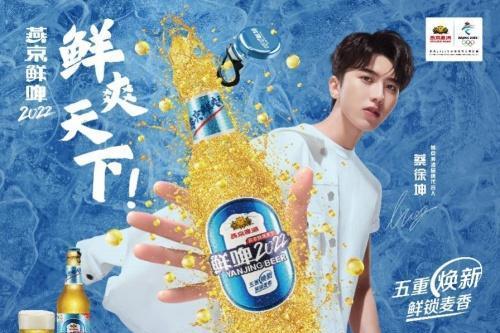 In the face of fierce competition in the beer market, Yanjing Beer’s outstanding performance in the market has actually accumulated for a long time. In recent years, Yanjing has continuously launched phenomenal items. The dual-driven model of cultural marketing leads the new trend in the beer market.

Entering June, Yanjing Beer has launched a high-profile new product this summer, “Yanjing Fresh Beer 2022”, with the selling point of “Five Rejuvenation of Fresh and Locked Wheat Fragrance”. A comprehensive upgrade has been carried out. In fact, Yanjing Beer is the pioneer of domestic fresh beer. Due to different sterilization methods, most of the beers on the market are “cooked beer”. In 2004, Yanjing Beer successfully launched the first bottled fresh beer in China by adopting aseptic membrane filtration technology and aseptic filling. Once the product was launched, it was welcomed by consumers, especially in midsummer, the refreshing and mellow Yanjing Fresh Beer became a must-have product for people to spend in summer.

Once Yanjing Fresh Beer 2022 is launched, it will occupy No.1 on the Jingdong Beer Good List. On the Weibo platform alone, more than 1.1 billion people have read related topics. Behind the high-profile exposure is the marketing confidence that high-quality products bring to Yanjing.

A series of marketing actions for this new product launch, from a series of new media promotions in the early stage, to the TVC of the spokesperson Cai Xukun covering multiple new media platforms, and then to a series of lively and interesting marketing methods after the official announcement are linked. Consumers with different catalyst habits. At the same time, the Yanjing Fresh Beer 2022 chartered car of Beijing Metro Line 4, the large light box and large-screen advertisements at Wangjing Subway Station, and the elevator advertisements covering 15 cities in Beijing, Baoding, Tianjin, Zhengzhou and Hangzhou all demonstrate the importance of Yanjing Beer to Fresh Beer 2022. The determination to dominate the beer market this summer.

With the upgrade of consumption, the iterative cycle of the market for taste is significantly shortened. Being able to actively respond to market demand and even lead the market demand is a barometer for an enterprise to maintain its strong development potential. In recent years, Yanjing Beer has built a multi-dimensional market by launching intensive new products that are more in line with the tastes of different groups of people.

Since 2020, Yanjing Beer has successively launched Yanjing U8, V10, Xuelu, and this time Yanjing Fresh Beer 2022. It can be said that new products continue to build a full-coverage front for Yanjing products for different consumer groups. Yanjing U8 mainly focuses on “small-proof wine”. The 8°P small-proof special brewing technology reduces the acetaldehyde content in beer, allowing consumers to fully enjoy the mellow taste of rich malt aroma, becoming a new beer choice for young people. And V10, Yanjing Beer saw the blank of the domestic white beer market, and benchmarked the high-end crowd with its excellent taste. V10 has dense foam, full of malt flavor, and rich clove fragrance, which is loved by consumers. For the Z generation group, Yanjing Beer has launched Snow Deer Beer, which has a pure aroma and a refreshing taste, and has become a good beer for young people to gather and share. The Yanjing Fresh Beer 2022 listed this time stands out as a “fresh beer” with its fresh and refreshing taste and strong wheat aroma, making it a must-have summer product for everyone.

Read Also  China Securities Regulatory Commission: A benign ecology of the capital market has gradually formed, and the investment and financing functions have been enhanced_Li Chao_Development_Structural

Create a culture that empowers consumers with emotional value

Consumers have shorter and shorter time to make consumption decisions among many similar products. In addition to the choice of quality, it largely comes from the emotional value conveyed by the product. Yanjing Beer also attaches great importance to product innovation and the The emotional connection of consumers puts forward “you culture” as the brand connotation of Yanjing Beer. Yanjing’s “You Culture” emphasizes the need to make high-quality and high-quality products for thousands of “you”. At the same time, in the beautiful life advocated by Yanjing, there are also thousands of “you”. create. Geng Chao, Secretary of the Party Committee and Chairman of Yanjing Beer, said in an interview with the media, “Having your culture is a Yanjing exclusive cultural theme that we will focus on shaping during the 14th Five-Year Plan period. The core idea of ​​having your culture is that customers come first. business philosophy.”

In order to let consumers feel more emotional premium when choosing Yanjing Beer, Yanjing Beer has created value with consumers under the strategic construction of “Having Your Culture”.

As early as 2005, Yanjing Beer joined hands with the Beijing Olympic Games and became the official sponsor of the 2008 Beijing Olympic Games. In 2018, Yanjing Beer once again became the official sponsor of the 2022 Winter Olympics and Paralympics in Beijing, uniting top international sports events, reflecting the spiritual connotation of Yanjing’s products of daring to fight, dare to fight, and dare to win.

In order to link the emotions of different consumers, Yanjing Beer has taken a three-pronged approach from three aspects: high-end, rejuvenation and personalization. On the one hand, Yanjing V10 occupies a place among white beer consumers with its excellent taste, and the emotional expression of “pleasing oneself” is close to the middle and high-end people; Yanjing U8 has created a product label of “small wine with great taste” and has become a young consumer The first choice for friends gathering. For consumers in the Z era, Yanjing Beer has launched Snow Deer Beer. Through the product features of various tastes, outstanding colors and distinctive personalities, “Salute for Youth” has become a personality statement for young people, and quickly entered the shopping list of young consumers. Yanjing Fresh Beer 2022, which is listed this time, communicates with consumers in the form of posters, TVCs and advertisements in a series of marketing, with a distinctive personality of “fresh, ‘turning’ and boring”, conveying a sense of breaking the dullness and being sincere. distinct personality.

At present, the 14th Five-Year Plan has entered the second year of vigorous development. Geng Chao, Secretary of the Party Committee and Chairman of Yanjing Beer, said: “Yanjing will have higher development quality, better economic benefits, stronger innovation ability, wider market development, better governance level and better brand image during the 14th Five-Year Plan period. The best goal will be achieved.” As an old brand in the beer industry, Yanjing has always maintained a vigorous development trend of excellent quality and new products. At the same time, it actively creates emotional connections, uses brand culture to bring emotional premium to consumers, and promotes vitality through innovation and marketing, leading the rapid development of the beer industry.

Appointment of Minister of the Republic of Korea, resignation of the National Police Agency, Lee Jun-seok, etc.
Posted onJuly 1, 2022July 1, 2022