[IS 이슈] KBO in dilemma, announced the results of the reward and punishment committee postponed twice

The KBO (Korea Baseball Committee), which delayed the conclusion of the reward and punishment committee twice, fell into a dilemma.

KBO held a reward and punishment committee on the 22nd to review the disciplinary action of Kiwoom’s club, which was suspicious of’fan inspection’. The meeting, which started privately at 2:30 pm, was held for over three hours. Usually, the results are announced after the reward and punishment committee ends. But this time it was different. KBO said at 6 p.m. “The club requested an opportunity to call. I decided to submit an (additional statement) tomorrow. After confirming the contents, I will make a final decision.” A KBO official said in a phone call with Daily Sports, “I will receive a statement in the morning of the 23rd. A conclusion will come out in the afternoon of the 23rd.”

It may be an inevitable option considering the materiality of the matter. The biggest issue of this reward and punishment committee is’fan inspection’. Veteran Lee Taek-geun (40) from Kiwoom said, “The club inspected the fans,” and submitted a disciplinary request for damage to the dignity to the KBO asking for disciplinary action for the Kiwoom club (exclusively reported on December 10). Lee Taek-geun claims that the Kiwoom club used CCTV to inspect a specific fan who filmed the video after the second group catchball video was released on the broadcast in June of last year.

In response, Kiwoom’s team confronted, saying, “It’s not an temple,” and announced a legal response. Lee Taek-geun and Kiwoom club officials attended the reward and punishment committee on the 22nd and repeated their previous position.

The area to watch out for is that KBO mentioned the name of governor Jung Un-chan while explaining why the disciplinary announcement was delayed on the 23rd. This is also unusual. As a result of the daily sports coverage, it was confirmed that the conclusion of the reward and punishment committee and the opinion of the governor were contradictory.

The reward and punishment committee concluded a’severe warning’ regarding the suspicion of’fan inspection’. Article 151 of the Baseball Code, which is the basis for disciplinary action, states that’drug crimes, illegal military service, racial discrimination, violence, sexual crimes, drunk driving, gambling, doping, etc. As Lee Taek-geun argued, even if Kiwoom’s actions are recognized as’fan inspections’, it is unclear on what grounds the punishment will be.

If the regulations are expanded and interpreted and severe punishment is imposed, KBO and Kiwoom club may engage in a court battle. Kiwoom, who does not bend the position of “it is not an temple,” plans to file a lawsuit according to the results. The chairman of the KBO Reward and Punishment Committee is Choi Won-hyun, the representative lawyer of KCL. It is highly likely that a disciplinary conclusion for the suspicion of’fan inspection’ was concluded based on the judicial interpretation that’going to severe disciplinary action could be disadvantageous in the litigation.’

On the other hand, Governor Jung Un-chan is known to wish for more than a’severe warning’. This was identified as the main reason why the results were not announced after the reward and punishment committee was over.

On the 11th, the Korea Professional Baseball Players Association (Athletes Association) and the Korea Professional Baseball Retirement Players Association (Haneunhoe), a gathering of baseball elders on the 14th, issued statements saying, “Please impose strong discipline on the Kiwoom club.” In addition, in March, when the suspicion of former CEO Jang-Seok Lee’s’in-door management’, who was in prison in March, said,’If a serious issue occurs that damages the value of the league in the future, it is proposed to the board of directors and the general meeting as an agenda according to the case, and the nomination right is deprived or expelled. The first warning was received, saying,’We plan to respond strongly within the scope of the KBO regulations. Again, if the level of disciplinary action against raising raising ends with a’severe warning’, it is impossible to ignore the social ramifications. 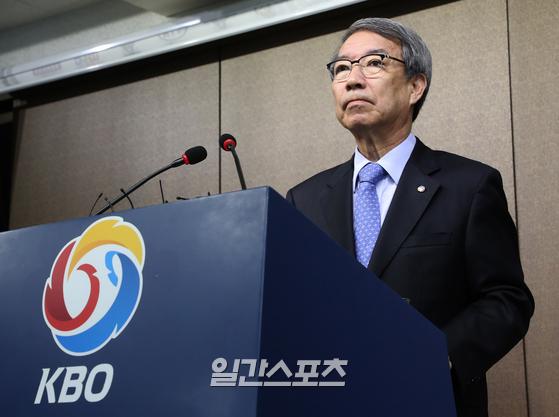 As the announcement is delayed, only the gap between the reward and punishment committee and the governor is being confirmed. In the current atmosphere, no matter what results are announced, one’s dissatisfaction will inevitably increase. Fire can splatter toward KBO. The term of governor Jung Un-chan ends in December.

A senior official from a club said, “Concerning the issue, the suspicion of’in-house management’ was more severe than it is now. Now, the meaning of aggravated punishment, but the concept of’fan inspection’ is ambiguous.” I don’t know if this is me.”

‘The truth of the three rumors’…why did you get off at Ishian?

The fifth day of the Winter Cup is over, Fukuoka Daiichi loses to Sendai University Meisei and the dream of winning the third straight victory is not met, and the girls will go to the final tomorrow –Basketball Count | Basket Count

Virat Kohli | Kohli is in trouble! Will...

Congratulations to BG! Shining 8 clubs through...

Vietnam has confirmed that it is ready...

The result of the election of the...