Is the graphics card still available? EVGA removed from waiting list for RTX 3080 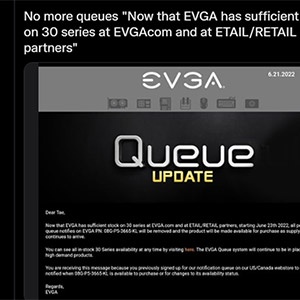 As demand surges due to the corona pandemic and the booming cryptocurrency mining market overlap, graphic cards that boasted high ransom prices are now finding their place.

EVGA, which had been given a waiting order due to insufficient supply as much as demand, also decided to exclude the GeForce RTX 3080 model from this system.

The model excluded from the waiting order is the GeForce RTX 3080 FTW3 Gaming model, and it is said that the stock has been secured enough to be purchased immediately from the 23rd local time, and there will be no supply problems in the future.

However, it is said that even if they are excluded from the waiting list, it is not possible to buy the price cheaper, and it is said that it will take more time for the price to drop further as consumers expect.

Models other than the RTX 3080 are still being given waiting numbers, but these models are expected to be removed from the waiting list in the near future. As the RTX 40 series is expected to be released in the second half of the year, market demand is bound to be less than usual.