Top Posts
Guardiola beat Tuchel to become Manchester City’s most...
Yoo Ah-in & Director Yeon Sang-ho’s New Netflix...
[게시판] Financial Supervisory Service and ADB share system...
When you come to life you’re gone #viral...
Six working groups from the Ministry of Water...
Kuwait contributed $ 327.4 million to the Kovid...
Victoria has 779 confirmed coronavirus cases, down from...
The United States is still in good form,...
Do this or regret it later. #edutok #passion...
Adult actress So-Young “My older sister was imprisoned...
Home World It’s getting harder to go to the US… U.S. “Only those who have completed vaccination are allowed to enter the country”
World

It’s getting harder to go to the US… U.S. “Only those who have completed vaccination are allowed to enter the country” 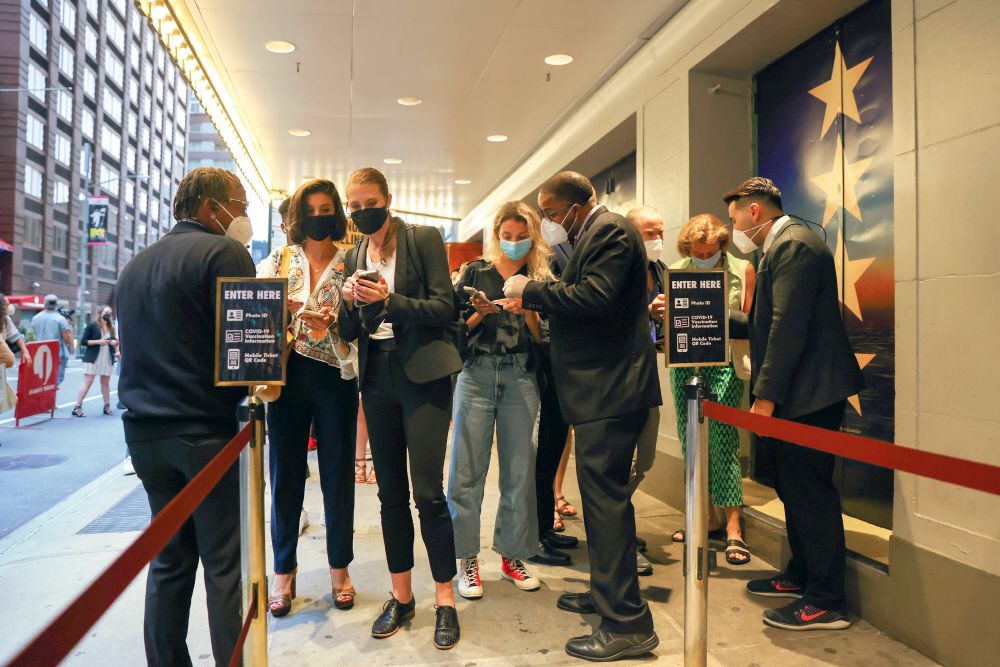 As the U.S. government pushes to allow entry only to foreigners who have been vaccinated against COVID-19, there is an emergency for U.S. visitors, including Korean businessmen. This is because only the mid-10% of Koreans who have completed the second dose of the COVID-19 vaccine can make it difficult for them to visit the United States.

Reuters reported on the 4th (local time) that the administration of Joe Biden is planning to make it mandatory for foreign visitors to be vaccinated, citing White House officials. Currently, health authorities are requesting negative results of nucleic acid amplification test (PCR) or antigen test within three days before departure for the United States. According to Reuters, the Biden government has been running an interagency working group to put in place a new system for travel resumption. The U.S. government is negotiating how to prove vaccination and how to respond to unauthorized vaccinated people.

If the US allows entry only to those who have completed vaccination, it will be difficult for Korean businessmen to visit the US. This is because the domestic vaccination completion rate is only 14% as of 00:00 on the 5th, which is very low compared to other countries. In the meantime, the government has even used the second dose of the AstraZeneca vaccine for the first dose to increase the primary dose. Ma Sang-hyeok, head of the Gyeongnam Provincial Medical Association’s Infectious Disease Countermeasures Committee, said, “This is a failure caused by delays in supply and demand caused by failure to secure vaccines early.”

Major companies are actively using the vaccination program prior to business trips, so there is no problem right now. Moreover, it is known that many of them have not been affected by sudden business trips as they started to vaccinate in-house from the end of last month. Hyundai Motor Group permits overseas business trips only to those who have been vaccinated according to the company’s overseas business trip guidelines. In the case of employees who are not vaccinated, the group is guiding the procedure of ‘Vaccination of business people leaving the country for essential purposes’. Employees who have a business trip plan in advance apply for and receive the vaccine after being approved.

However, small and medium-sized enterprises (SMEs), not large enterprises, are not getting the vaccine for overseas business trips.

The government announced on the same day that it had improved the advance reservation system, which caused controversy when booking vaccinations for people in their 50s. In the past, mobile phone user authentication, i-PIN, and joint/financial certificates were required for identity authentication, but now simple authentication is introduced through Kakao, Naver, and PASS apps. We plan to compare the congestion situation for each authentication method using the traffic light method so that there is no congestion in use. In addition, in the improved system, you will go through ‘personal authentication’ instead of ‘waiting for reservation’. This is to prevent unnecessary connections from occurring. Reservation by proxy is not allowed, and self-authentication can only be done once every 10 minutes. The transfer of the private cloud is also scheduled to be completed by the 9th, and the maximum processing level per hour will increase from 300,000 to 2 million. In addition, Minister of Health and Welfare Kwon Deok-cheol said in a briefing on the same day, “Samsung Biologics has been planning the trial production of the Moderna mRNA vaccine from the end of August.”

Meanwhile, while booster shots are being promoted mainly in advanced countries, the World Health Organization (WHO), concerned about a shortage of vaccines, urged the suspension until at least the end of September, Reuters reported. But White House press secretary Jen Saki told the New York Times that “it’s definitely the wrong choice,” and “we can do both.”

Trat Province Public Health announces the situation of Covid-19 is improving. After the infection increased to only 20 cases per day.

Sharjah Police with awareness on the latest methods...

The body was found in a pond

Those who do not have permission to...

January 27, 2021
We use cookies on our website to give you the most relevant experience by remembering your preferences and repeat visits. By clicking “Accept All”, you consent to the use of ALL the cookies. However, you may visit "Cookie Settings" to provide a controlled consent.
Cookie SettingsAccept All
Manage consent