On the 30th, Gyeonggi Governor Lee Jae-myung and former president Lee Nak-yeon, two major runners in the Democratic Party’s presidential primary, entered into a great battle across the country. The governor, who had limited outside activities due to his status as the current governor, took a day off and started a national tour for three nights and four days, and the day the governor left his room, the former president visited Gyeonggi-do.

Jae-myung Lee in Daegu… “A giant with a scholarly spirit, wake up”

Starting from Daegu and Ulsan on this day, the governor will visit Busan and Gyeongnam (31st), Jeonbuk and Chungnam (1st of next month), and Daejeon and Chungbuk (2nd of next month) sequentially for four days. On the day of the declaration of candidacy (the 1st), after visiting his hometown of Andong, North Gyeongsang, Daegu was chosen as the first tour destination, emphasizing the extensibility of his appearance as a ‘Youngnam runner within the Democratic Party’. Also, the first visit to the ‘February 28 Democracy Movement Monument’ in Dalseo-gu, Daegu, is the same as the first campaign scheduled since President Moon Jae-in was confirmed as the Democratic presidential candidate in 2017.

Gyeonggi Province Governor Lee Jae-myung, the presidency of the Democratic Party of Korea, visits the Daegu 2.28 Democracy Monument and worships on the morning of the 30th. News 1

After visiting the monument, the governor said, “I have a lot of affection for Gyeongbuk to the point where I still hum the ‘Song of the People of Gyeongsangbuk-do’ (Doga, 道歌).” Maybe, but now you should be able to make (different) choices.” “Even if a servant betrays his master, if he favors him because of the red color, what will he do?” He said, “Youngnam is a giant with the great spirit of reform and resistance of scholars. I will wait for the giant to wake up.”

In Yeongnam, a traditional conservative garden, when the approval rating of opposition figures such as Yoon Seok-yeol, former Prosecutor General, was high, it is interpreted as a statement that checked it. However, it is pointed out that words such as “It is regrettable that Daegu and Gyeongbuk are ruled as rulers rather than workers” used in this process can be seen as expressions of undermining the political choices of TK voters. Governor Lee also wrote in a dialect, saying, “Old people from my hometown, take good care of my son Jae-myung Lee, who has moved to near Seoul.”

Afterwards, the governor visited the former home of Jeon Tae-il in Daegu, held a meeting with reporters in Daegu, and then moved to Ulsan to visit the ‘Labor History Museum 1987’ in Buk-gu. Regarding the future schedule, the branch office said, “We will strengthen physical contact with local residents nationwide starting with this tour, as long as it does not interfere with the journey.” “We plan to announce that the candidate who will win the final is Lee Jae-myung.” 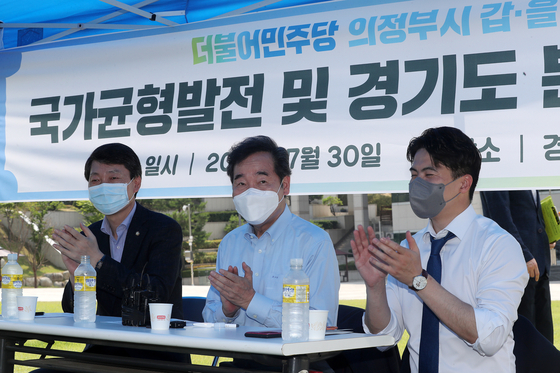 Lee Nak-yeon, a former presidential candidate for the Democratic Party of Korea, holds a discussion on balanced national development and Gyeonggi-do Bundo at the grass square of the Gyeonggi Provincial Government Office in Uijeongbu, Gyeonggi-do on the morning of the 30th, and applauds with the attendees. From left, Rep. Kim Min-cheol, former Representative Lee Nak-yeon, and Rep. Oh Young-hwan. News 1

Gyeonggi-do Bundo has been a controversial topic in every election since former President Roh Tae-woo made a promise during the 1987 presidential election. Jeon Hae-cheol, the Minister of the Interior and Safety, who was an opponent of Lee during the 2018 Democratic Party’s Gyeonggi governor election, insisted on bundling. Governor Lee objected for reasons such as “It is clear that the northern part of Gyeonggi Province is going to deteriorate financially” (October last year). In Tokyo, it is a sharp issue that differs for and against depending on the region.

Former CEO Lee said, “In the name of security, the northern part of Gyeonggi Province has been forced to make sacrifices due to border restrictions. Now, compensation, not words, should be given.” Assemblyman Oh Young-hwan (Uijeongbu-gap, Gyeonggi-do), who came with Lee as the head of the training department, also said, “The northern part of Gyeonggi Province has made special sacrifices, but so far there has been only sweet words: ‘Special sacrifice for special reward’.” ‘A special reward for a special sacrifice’ is a phrase often used by the governor.

Former CEO Lee will visit Incheon on the 31st and the 1st of next month. Lee Nak-yeon, a camp official, said, “After Incheon, I plan to visit TK (Daegu, Gyeongbuk) next week, and I will continue to actively travel across the country, such as going to Chungcheong next week.”

Following the impeachment of 盧 and Baekje, this time the chicken knife debate

At the same time as the circuit war, the nerve war between the two sides continued. The main topic of controversy was ‘cow knives and chicken knives’. In relation to the fact that the Lee Jae-myung camp has criticized Lee Jae-myung for saying, “The rate of fulfillment of the promises made during the Jeonnam governorship period was low,” Lee responded in an interview with the press released on the same day, saying, “The knife for slaughtering chickens and knives for catching cattle are different.” done.

In response, Lee Jae-myung, a spokesperson for the camp, said, “Does it mean that all local government heads across the country have only knives for slaughtering chickens? What would you do if you had a knife that caught a cow? They couldn’t even catch chickens properly,” he said, adding, “It is an undeniable fact that former CEO Lee ranked last in the nation in the evaluation of the fulfillment of promises made by civic groups when he served as the governor of Jeonnam.”

Then, Lee Nak-yeon, a spokesperson for the camp, said, “In May 2017, shortly after the birth of the Moon Jae-in government, Lee was appointed Prime Minister. It is a situation where it is impossible to judge the fulfillment rate of the promise throughout the four-year term,” he said. Then, he commented, “It’s a black propaganda like saying to a transfer student, ‘I failed because I didn’t take the rest of the exam’.”

Six working groups from the Ministry of Water...

The opening of the 2021 World Internet Conference...

Injuries all over the body; Kodi Suni’s ‘opponent’...

Foreign media: a new round of epidemic...

December 18, 2020
We use cookies on our website to give you the most relevant experience by remembering your preferences and repeat visits. By clicking “Accept All”, you consent to the use of ALL the cookies. However, you may visit "Cookie Settings" to provide a controlled consent.
Cookie SettingsAccept All
Manage consent