Jiang Wu’s “Sweeping Darkness: Decisive Battle” will be released on May 1st, Song Yirui, the leader of the anti-negative campaign, strikes out_TOM Entertainment

Directed by Lu Yulai and starred by Jiang Wu, the movie “Sweeping the Darkness: Decisive Battle” will be released nationwide on May 1. The film is based on some real cases in the national anti-gang campaign. By telling the story of the anti-gang team upholding fairness and justice, it confronts the first-line contradictions and conflicts in the anti-gang campaign. In the film, Jiang Wu plays Song Yirui, the head of the upright anti-criminal investigation team. He fought fiercely against the evil forces and vowed to bring criminals to justice.

In the previously released trailer for the “Dare to Shoot and Act” special feature of “Sweeping Darkness: Decisive Battle”, Jiang Wu looked at the opposite side with a certain face, and methodically said “You eat meat, the people drink soup”, the loud and loud lines, short and simple. Straightforward launched a complaint against the “Umbrella” of the underworld and evil forces, bringing out the corruption in reality and the film and the shameful acts of collusion between officials and businessmen one by one. At the same time, the image of “Song Yirui”, who dared to fight against the dark forces, was unyielding and uncompromising, was portrayed, which made the audience feel the strong shock and powerful appeal, and they also looked forward to the film more. 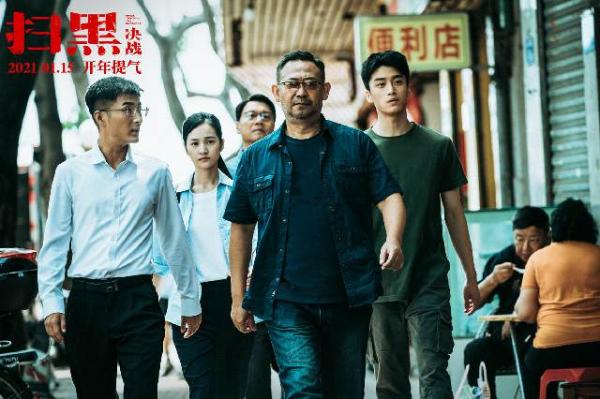 In last year’s phenomenon-level mega-production “The Eight Hundred”, Jiang Wu was also well received for his role as a melancholy. “Timid, honest, and clear” small professional households seemed to be the inherent image of Jiang Wu on the screen. In the new work “Sweeping Darkness: Decisive Battle”, Jiang Wu plays the role of the leader of the anti-black task team with pure background and flesh and blood. There are a lot of neat and refreshing action scenes. These exciting and tense scenes make adrenaline soar. , As if facing the thrilling moment of the duel of good and evil!

At the end of the three-year special struggle against gangsters and evil, the movie “Sweeping Darkness: Decisive Battle” came into being, demonstrating the results of the battle and showing the audience a long night light. The thrilling plot design in the film echoes the ongoing special struggle to eradicate evil and evil in reality, and the ingenuity creation that closely follows the pulse of the times, opens up new expressions in the creation of political and legal themes of film and television dramas, which gives the audience a strong emotional resonance .

Ploy Pattakorn has been interviewed. male specs you...

Vinayan: The eyes of those around him were...