Skip to content
On the afternoon of the 17th, monks of the Jogye Order raise 1080 times the amount of penance and reflection at the Confession Jeongjinbeop held at the Daeungjeon Hall of Jogyesa Temple in Jongno-gu, Seoul. The meeting started with Chung Cheong-rae, a lawmaker from the Democratic Party of Korea, who, at the Cultural Heritage Administration audit last October, compared the entrance fee to cultural properties in the national park to a ‘toll tax’ and compared the temple that collects it to ‘Bongi Kim Seon-dal’. The Jogye Order emphasized the meaning of self-reliance, saying, “Even if it is the remarks of a writer who is ignorant of the meaning and value of cultural heritage and is obsessed with prejudice, this is a report card about the social status and role of today’s Korean Buddhism.” 2021.11.17/News1 ⓒ News1

On the 21st, the Jogye Order held the ‘National Monks Contest for the Eradication of Religious Bias and Buddhist Distortion and the Protection of Korean Buddhism’s sovereignty’ at the front yard of Daeungjeon Hall of Jogyesa Temple in Jongno-gu, Seoul. The event was held in the presence of over 3,000 monks.

At the conference, outright complaints and criticism poured in along with the current government’s allegations of religious bias. During the ceremony, Monk Wonhaeng, head of the Jogye Order, said, “Buddhism of unity, mercy, and inclusion, which sacrificed their lives for the Catholics during the Joseon Dynasty, has provided the foundation for a multi-religious nation, a model nation free from conflicts between religions. “I can’t find any results,” he pointed out.

He continued, “Cheonjinam and Juosa Temple have become Catholic holy sites, and the fences of the national park provided for the convenience of the people constrict the training space,” he said. revealed

“The government is at the center of this process,” he said. Opportunities were unequal, the process was unfair, and the results were unjust,” he said. 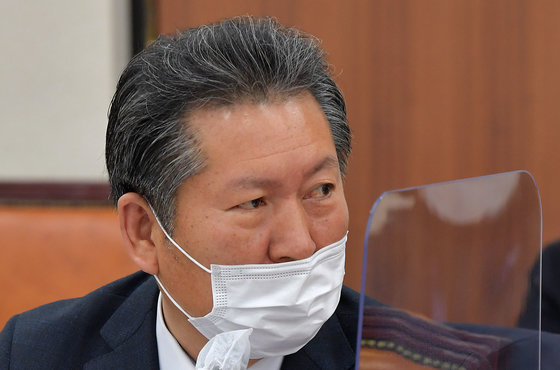 In a state audit last year, Monk Deok-moon, chairman of the Jogye Order Parish Headquarters Association, and Jeong Moon, the chairman of the Central Order, called the entrance fee to Haeinsa cultural assets a toll and criticized the Democratic Party of Korea lawmaker Jeong Cheong-rae, who compared the walking temple to ‘Bongi Kim Seon-dal’. The Jogye Order also demanded the expulsion of Rep. Chung Cheong-rae and the resignation of Minister of Culture, Sports and Tourism Hwang-hee.

He continued, “Even the ruling party’s lawmakers made fun of temples and monks who paid for cultural properties. They are treating them like bandits paying tolls, and comparing them to ‘Bongi Kim Seon-dal’, they are driving them as a group of scammers.”

Monk Jeong Moon said, “Rep. Chung Cheong-rae of the Democratic Party of Korea, who made the remark ‘Bongi Kim Seon-dal’, has rejected Jogyejong’s request for an interview and has been ignoring the continuous apology. He continued to walk arrogantly, calling it public opinion and ignoring the Buddhist community.”

He continued, “As the Buddhist community’s anger grew, he unilaterally visited Jogyesa Temple to apologize on November 25, 50 days later, but it was already just a pretense of a posthumous visit to medicine.”

On this day, the video of Minister of Culture, Sports and Tourism Hwang Hee was shown at the end of the competition, but the screening was stopped in the middle due to protests from angry Buddhists and monks. Initially, there was going to be a direct apology from the Democratic Party leader Song Young-gil, but the competition ended as it was due to strong opposition from the participants of each local temple.

Rep. Jeong also tried to apologize to Jogyesa Temple, but turned away from the entrance of the event. Rep. Jeong told reporters, “I was told to come here today, so it would be better to just announce an apology at the Jeongrongwan of the National Assembly while I’m coming,” he told reporters.

When asked if the Jogye Order was against the (event venue) position, he replied, “I don’t know.”