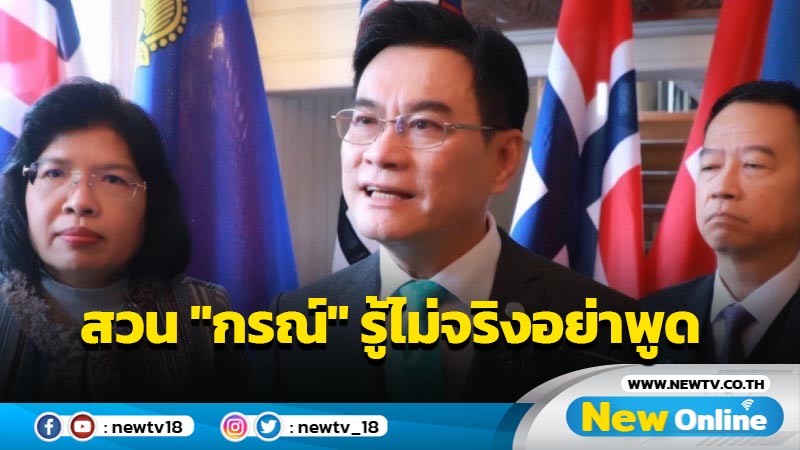 “Jurin” Suan “Kon” knows if it’s not true, don’t say it. The campaign must be responsible.

On June 22, 65, Mr. Jurin Laksanawisit, Deputy Prime Minister and Minister of Commerce, leader of the Democrat Party (PDP) gave an interview in the case of Mr. Korn Chatikavanich, the party’s leader, dared to give news. Alluding to Mr. Jurin, saying that ”The party dares to say that the price of oil will be reduced by 4 baht immediately if the Commerce Minister uses his power to reduce the refining rate accordingly. Act on the price of goods and services because oil is a regulated commodity.” Korn would like to continue speaking about the refining rate earlier. But I forgot that the campaign has to be responsible. Courage is a good thing, but it takes courage to do the right thing. and before speaking, one must know the truth about what he said Because Mr. Korn understands that if oil is a controlled product Act on the price of goods and services of the Ministry of Commerce The Minister of Commerce can order how to deal with oil matters. Including ordering to reduce the refining cost or reduce the price of oil as well which Mr. Korn misunderstood Because oil has both specific laws and specific orders of the Prime Minister, it is the duty of the Ministry of Energy, both according to the National Energy Policy Council Act. The Petroleum Fund Act and the Prime Minister’s Order, which clearly specifies the price calculation and determination of prices in front of the refinery, wholesale-retail prices, marketing costs, transportation costs, storage costs. maintain fuel Including requiring the refinery to inform the wholesale price in front of the refinery is the power and duty of the Energy Policy Administration Committee (MPG), chaired by the Minister of Energy. Even if the Ministry of Commerce announces that oil is a controlled product, it will have the power to follow. Act on the price of goods and services in general only in the part that does not use powers and duties instead or use the power on behalf of those who have the powers and duties under specific laws, such as having the power to require the gas station to display the retail price of petrol at the petrol station or gas station Checking the nozzle that measures the amount of oil to ensure accuracy in accordance with the Act on Weights and Measures, or prosecute a gas station if the oil is sold in excess of the price announced on the charge of selling more than the price displayed on the sign or trading in excess of profit should, etc.

Read Also  "Jurin" discussed the US Trade Representative at the APEC forum asking the US to release Thailand from the WL list.

As for the question whether Mr. Korn wants to cast his sins on Mr. Jurin for political purposes or not. Mr. Jurin said that he did not ask for an answer, only to come out to criticize or say something, he should know the truth, both the law and the practice. Otherwise, it is not practical and must be held accountable. Not being superstitious because it may cause misunderstandings among the people. And as for the Ministry of Commerce, what powers and duties are not illegal, willing to do everything for the people.

Femininity was insulted; A case was filed against PC George for misbehaving with the journalist
Posted onJuly 5, 2022July 5, 2022

Anson Lo’s new song “King Kong” won the support of the gods and the IG page appealed to support idols but not to step on the Hong Kong music scene
Posted onJuly 5, 2022July 5, 2022
Menu