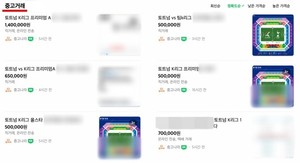 Tickets for the ‘Team K League’ match between Tottenham Hotspur and Tottenham Hotspur, the English professional football Premier League, to which Son Heung-min belongs, are sold out in 25 minutes, and ticket prices are being sold several dozen times higher.

At 3 pm on the 17th, ticket reservations for Team K League and Tottenham Hotspur games were held on the Coupang Play app and website.

Coupang Play, the organizer of Tottenham’s visit to Korea, said, “The tickets for the first game of the Coupang Play series between Tottenham and Team K League on the 13th of next month were sold out in 25 minutes from 3 pm on the same day.”

The match between Tottenham and K-League, a team made up of players, will be held at the Seoul World Cup Stadium at 8 pm on the 13th. Coupang Play series matches are broadcast exclusively digitally by Coupang Play in Korea. In the Coupang Play series, you can meet Son Heung-min as well as Tottenham striker Harry Kane, captain of the England national football team.

After that match, Team K League will play the Spanish La Liga against Sevilla on the 16th of the same month at Suwon World Cup Stadium in Gyeonggi-do. Ticket reservations for this game are also made on the Coupang Play app or website, and will start at 3 pm on the 19th.