Group BTS is taking a commemorative photo after performing ‘Permission to Dance’ at the ‘2021 Global Citizen Live’ event that was broadcast live online on the 26th with the national treasure Sungnyemun in the background. Provided by Big Hit Music

The group BTS set the stage with the national treasure Sungnyemun as the background. British rock band Coldplay vocalist Martin wore an improved hanbok to the event and sang some of the lyrics for the new song in Korean.

In the performance of ‘2021 Global Citizen Live’, which was broadcast live around the world on YouTube on the 26th, traces of Korean cultural heritage could be seen everywhere. This is the result of BTS actively incorporating traditional elements into their performances and introducing Korean culture through exchanges with world-famous foreign artists.

Global Citizen Live is a charity performance called ‘Live Aid’ in the 21st century. World-class pop stars came forward and held concerts simultaneously in major cities on six continents with the aim of uniting their efforts to solve problems facing the world, such as the climate crisis, the equitable distribution of the novel coronavirus infection (COVID-19) vaccine, and poverty. At this large-scale event, BTS came out as the first performer. Broadcaster Scott Evans, a show host in Los Angeles, USA, said, “I don’t know if there is a group more popular than them in the world,” and “We will perform at Sungnyemun, a symbolic place in Seoul.”

Group BTS is performing ‘Permission to Dance’ in front of Sungnyemun as the first performer of ‘2021 Global Citizen Live’, which was broadcast live on YouTube on the 26th. Provided by Big Hit Music

BTS performed the ‘Permission to Dance’ performance on a special stage prepared near Sungnyemun. Behind the stage of the seven K-pop idols, the lighting in the dark lit up Sungnyemun splendidly. It was a moment when the beauty of traditional Korean architecture shined. Traditional Korean patterns were engraved on the floor of the BTS stage, which was made in a circle. BTS sang “Butter” while dancing on the road near Sungnyemun. The night view in the middle of Seoul was introduced to the world through K-pop stars’ performances. It wasn’t 3D compositing. A Big Hit Music official said in the main report that day, “The stage was filmed by BTS directly near Sungnyemun.”

Coldplay did a great job as a Korean culture evangelist.

Martin, who is called the 8th foreign member of BTS, wore a purple improved hanbok top and stood on the stage of the Global Citizen Live event just before his concert in New York, USA. This is a costume that BTS gave to the four members of the band while building a friendship through the collaboration of Coldplay’s new song ‘My Universe’. Martin sang ‘My Universe’ in Korean in front of an American audience, saying, “In the long shadow.” Coldplay directly sang the lyrics written in Korean by BTS in this song in Korean. On the stage screen of ‘My Universe’, a video of the seven BTS members singing in turn appeared continuously for about 4 minutes. When the video of BTS member Jin singing a song appeared on the screen, Martin introduced it as “World Wide Handsome”, meaning “worldly handsome man”. It is believed that Martin knew that Jean was ranked first in the ‘World’s Most Handsome Man’ in a 2019 survey of 18,000 people from 58 countries by the Czech doll designer team.

A video of seven members of the group BTS appeared on the screen of the British rock band Coldplay. This is the stage of ‘My Universe’, the ‘2021 Global Citizen Live’ event that was broadcast live online on the 26th. Global Citizen Live Video Capture 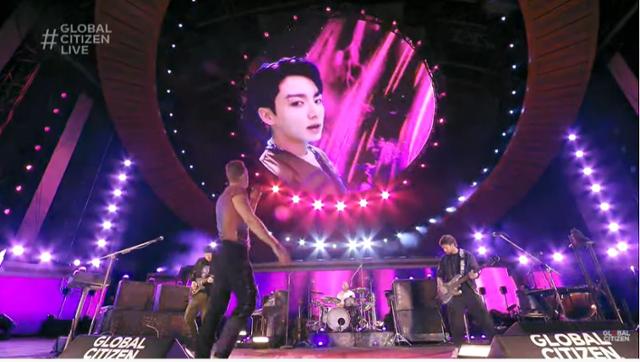 A video of Jungkook, a member of the group BTS, appeared on the screen of the British rock band Coldplay. This is the stage of ‘My Universe’, the ‘2021 Global Citizen Live’ event that was broadcast live online on the 26th. Global Citizen Live Video Capture

Before the performance of ‘My Universe’, Martin said, “I collaborated with BTS members who are about 15 younger than us,” and said, “It was a very enjoyable project.”

‘My Universe’, written and composed by BTS and Coldplay together, swept the iTunes charts in 65 countries, including the United States, France, and Japan, on the day of its release on the 24th. Also on major domestic music sites such as Genie and Bugs Music, as of 2pm on the 26th, it has been at the top for three days.

Destiny has found a good person. I...

Letter to the editor: Bass is the...