On the 28th, an article related to a 250 billion won planned real estate fraud case reported on a large scale showed strong displeasure at the misuse of his photo.

On the 29th, Kang Su-jeong revealed the contents of a text message sent by an acquaintance on her SNS. In the text, an article related to ‘Gagwoman Ahn Su-mi implicated in a planned real estate case worth 250 billion won’ contains a recent photo of Kang Su-jeong.

The acquaintance said, “Aren’t you planning fraud? I asked the reporter to edit the photo,” he said. 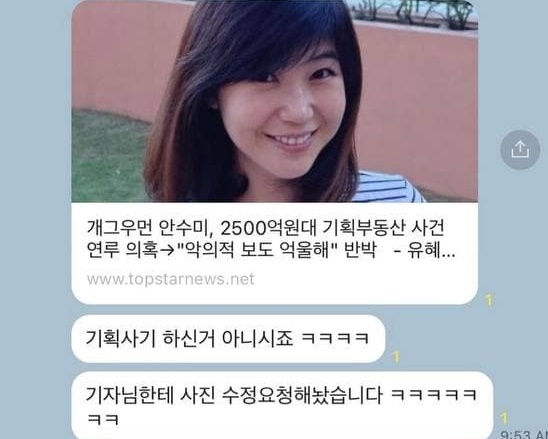 In response, Kang Su-jeong said, “It was a little funny this morning when my photo was put in someone else’s article by mistake, but the photos are being published indiscriminately on blogs and YouTube.” I did, but it seems to be getting more and more as time goes by.”

He continued, “I hope that everyone who uploaded videos and photos should take it down even now. There are people who just blurted it out, but it feels really bad.” “Why did a reporter who wrote a personal daily photo in someone else’s fraudulent article do that? I am really angry,” he said.

Kang Su-jeong married her husband who works for a Hong Kong financial company in 2008 and is currently living in Hong Kong.

Have you already had to be in...