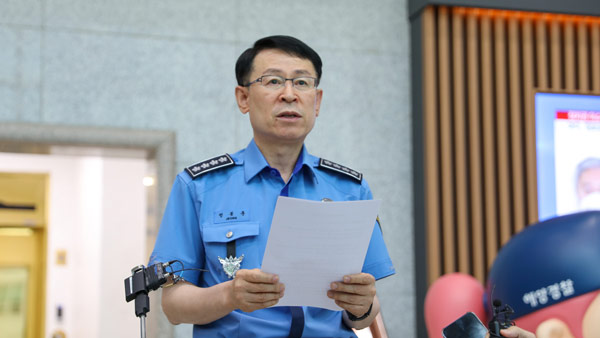 Commissioner of the Coast Guard to apologize to the public for the ‘hidden civil servant incident’ 2022.6.22 [해양경찰청 제공]

Commissioner of the Korea Coast Guard, Jeong Bong-hoon, today apologized to the public in connection with the investigation into the ‘West Sea public official’ incident.

Commissioner Jeong said at the lobby on the 1st floor of the Coast Guard Office this afternoon, “I sincerely apologize to the public and the bereaved families for causing many misunderstandings regarding the announcement of the results of the investigation into the victim.”

He added, “As the head of the Coast Guard, I feel deeply responsible for causing confusion and disappointment with the announcement of the investigation.”

The announcement of the position of Commissioner Jeong was made abruptly after meeting with members of the People’s Power ‘Task Force to Investigate the Fact of the Ministry of Maritime Affairs and Fisheries’.

Commissioner Jeong explained that in the recent announcement of the final investigation result, the result was completely different from the announcement of the interim investigation 1 year and 9 months ago, “according to the initial position of the Ministry of National Defense and the evidence confirmed by the Coast Guard itself, we decided that it was North Korea.”

Read Also  Not sold out, keep it for a chance! Finally, the market Lottery sellers sell by themselves, cheap, 6 million.

He also said, “The opinion of the Investigation Deliberation Committee was that existing data could not be regarded as the basis for defecting to North Korea because it had to be rigorously proven. We have closed this case by considering the practical benefits,” he said.

He continued, “I ask that you judge the results of the investigation by the legal standard, and I also offer my condolences and condolences to the bereaved family.”

Previously, the Coast Guard announced the results of the interim investigation after a week when Lee Dae-jun, an official of the Ministry of Oceans and Fisheries, was assassinated by North Korean soldiers in the West Sea in September 2020.

However, after 1 year and 9 months, he held a press briefing on the 16th and overturned the investigation result, saying, ‘I couldn’t find Mr. Lee’s intention to defect to North Korea’.