A message that Minah Kwon, a former member of the group AOA, shared with a fan before making an extreme choice was revealed.

On the 29th, a post titled ‘DM (Direct Message) released by Minah Kwon’s fan’ was posted on an online community.

In the captured photo, a fan sent a link to Kwon Min-ah saying, “Sometimes, when I have troubles, it is a song video and text I watch and listen to to comfort me.” He added, “I want to give Minah a little bit of courage and strength.”

Kwon Min-ah said at 3 am on the 26th, “Right now, I’m just stopping. I want to leave it to my brother in the agency, cool my head from the beginning of August to mid-August, and not think about anything for a while.” He replied, “I’m doing well, so don’t worry too much.” 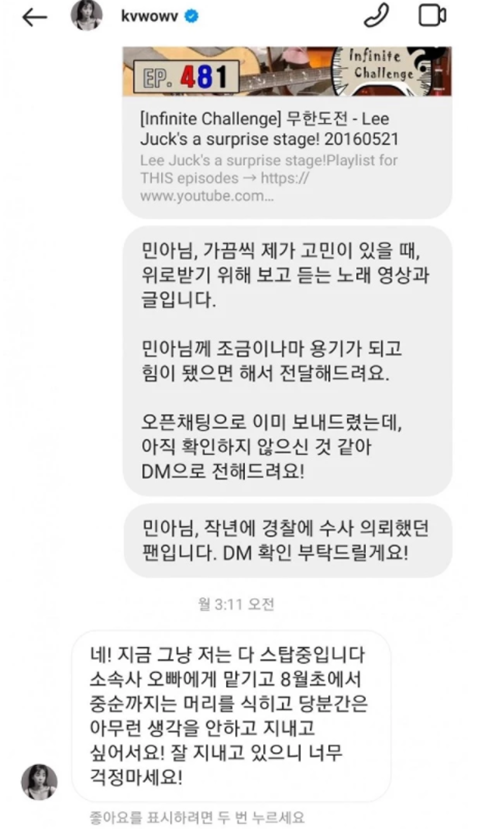 Earlier on the 29th, a media reported that Kwon Min-ah was found by an acquaintance after trying to make an extreme choice at home this morning and was transferred to the hospital.

At the time of discovery, Kwon Min-ah was in a state of excessive bleeding, and an acquaintance who was worried that she could suddenly lose contact with Kwon Min-ah visited her house and found him and quickly called 911. Kwon Min-ah, who was transported to a nearby hospital, underwent emergency suturing and is said to be life-threatening.

Meanwhile, Kwon Min-ah, who turned to an actress after leaving AOA in May 2019, revealed that she was constantly harassed by leader Jimin during her group activities in July of last year. As the controversy grew, Jimin left AOA and stopped promoting. Recently, after revealing a non-celebrity boyfriend through SNS, he was embroiled in a two-legged controversy.

※If you have troubles such as depression, or if you have family or acquaintances who are experiencing these difficulties, Suicide Prevention Counseling Line ☎1393, Mental Health Counseling Line ☎1577-0199, Hope Phone ☎129, Lifeline ☎1588-9191, You can receive advice from experts 24 hours a day at Youth Phone ☎1388, etc.

MBC buys subtitles again… It’s the 6th baseball game, “4-2, the game is over”

Tianxin applied for administrative assistant not to change...

Gura Kim, the reason for late revealing the...

There is nothing to worry about, “V Violet”...

Lee Hye-jeong A husband who starves if he...

Researchers have revealed that the “prominent symptoms”...

Strongest photos of all time part 2...

February 11, 2021
We use cookies on our website to give you the most relevant experience by remembering your preferences and repeat visits. By clicking “Accept All”, you consent to the use of ALL the cookies. However, you may visit "Cookie Settings" to provide a controlled consent.
Cookie SettingsAccept All
Manage consent