Ulsan Hyundai succeeded in advancing to the quarterfinals of the 2021 ACL thanks to Lee Dong-kyung (center)’s winning goal. (Provided by Korea Professional Football Federation) © News 1

(Jeonju = News 1) Reporter Lee Jae-sang = Ulsan Hyundai laughed at the end of the extra-time bloody fight in the “Hyundai Family” derby in the quarterfinals of the AFC Champions League (ACL). Lee Dong-kyung’s decisive left foot exploded in the first half of extra time. The mid-range shot was the winning goal.

Both teams were tied 2-2 in the 90 minutes of the first half, and Lee Dong-kyung scored the winning goal in the 11th minute of extra time to lead the victory.

Ulsan, who climbed to the top of Asia last season, succeeded in advancing to the quarterfinals for the second year in a row. Ulsan, which had an advantage with 1 win and 2 draws in the K-League 1 match this season, continued their unbeaten streak against Jeonbuk in the ACL. In addition, Ulsan continued their unbeaten streak in 18 ACL matches that they had recorded since last year.

On the other hand, Jeonbuk, which had been aiming for the semifinals in five years after becoming the Asian champion in 2016, left a deep disappointment as they were caught in Ulsan in the home office.

With this, Ulsan will compete with the Pohang Steelers, who previously defeated Nagoya Grampus (Japan) 3-0, to advance to the final. Ulsan and Pohang will play the semifinals at the same place on the 20th. It is the first time in 5 years since Jeonbuk and FC Seoul in 2016 that a K-League team reached the semifinals together.

The defending champion Ulsan scored the opening goal in the 13th minute after Baco finished with a fantastic individual skill. On the right side of the penalty box, he outdone the Jeonbuk defenders with his exquisite skill and then shook the other side’s net with a sharp left-footed shot.

While Jeonbuk took a high market share, Ulsan counterattacked with a quick counterattack. In the 38th minute of the first half, Il-rok Yoon, who dug into the space behind the defense, fired a shot with his left foot, but it went just over the goal.

Jeonbuk turned the game around with a counterattack in the 39th minute of the first half. Gyo-won Han, who received Kim Bo-kyung’s kill pass, cut the net with a powerful shot from the front of the arc.

Ulsan took the lead in decisiveness amidst the match-up. Ulsan scored a goal again to take the lead in extra time in the first half. In the 47th minute of the first half, Yoon Bitgaram’s left-footed shot from the front of the arc hit keeper Song Bum-geun, passed through Seol Young-woo and Oh Se-hoon, and Yoon Il-rok, who was at the gate, finished the game.

Jeonbuk, who fell 1-2 in the first half, tied the score in the fourth minute of the second half by Kunimoto.

Gustavo changed the direction of the throw from the left flank to his head, and Kunimoto, who was in the penalty box, scored with an exquisite left-footed shot after chest trapping.

In the 11th minute of the second half, Jeonbuk got a decisive opportunity from the left side of the penalty box, but the left-footed shot went slightly off.

Ulsan removed the raw material in the 20th minute of the second half and added Lee Dong-kyung to reinforce the midfield. Jeollabuk-do immediately replaced Kunimoto with Song Min-gyu and set the fire.

In the 35th minute of the second half of Ulsan, which was quiet, Yun Bitgaram’s mid-range shot hit the post, leaving a disappointment. In the end, both teams could not decide on a game in the 90 minutes in the first half and went into overtime.

Jeonbuk missed a decisive opportunity in the 7th minute of extra time. A cross from the left, which Gustavo connected with a header, hit the left post and came out.

Ulsan, who had overcome the risk of conceding, shook the net with a left-footed shot by Lee Dong-kyung in the 11th minute of extra time. Lee Dong-kyung’s left-footed shot from a 45-degree angle to the right of the penalty box landed in an exquisite position, leading to a goal. It was a wonder goal that Jeonbuk goalkeeper Song Bum-geun could not do. 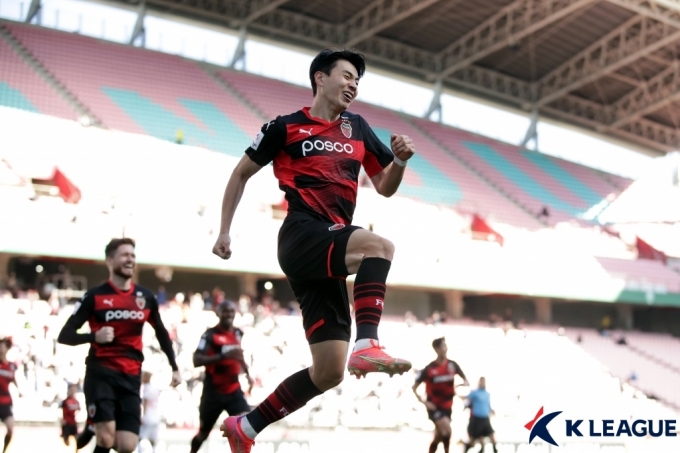 The Pohang Steelers Im Sang-hyeop celebrates after scoring the opening goal in the second half of the ACL quarterfinal match against Nagoya Grampus in Jeonju on the 17th. (Provided by Korea Professional Football Federation) © News 1

In the second half of extra time, Jeonbuk launched a full offensive with Lee Yong and Lee Yu-hyeon, but Ulsan also blocked the opponent’s attack with a defense of meat.

Just before the end of the game, Gustavo’s right-footed shot from the front of the arc slightly missed the post. In the end, after 120 minutes of bloody battle, Ulsan defeated Jeonbuk and rode the last train to the ACL semifinals.

Pohang, who won 1-0 away against Cerezo Osaka in the round of 16, advanced to the semifinals by defeating the Japanese team in the tournament for the second time in a row. Pohang was in the same group as Nagoya in the ACL group stage this season, and was inferior with 1 draw and 1 loss.

The ACL semifinals between Ulsan and Pohang will be held in Jeonju on the 22nd. In other West Asian regions, Al Hilal and Al Nasr (Saudi Arabia) will face off in the semifinals.

Singer Su-nam Seo confessed that he had a history of being diagnosed with diabetes in his late 50s due to stress, overwork, and binge eating.

Dravid will surprise you, he knows everything...

‘Bad Lok’ insists that there is no...