Democratic Party presidential candidate Lee Jae-myung visited the site under development in conjunction with the Daejang-dong project on the 29th, and poured out intense real estate promises as if he was determined. It is the first time to visit the relevant site after the Daejang-dong allegation surfaced, and it is the first time to have a ‘super strong’ following the attendance at the Gyeonggi state audit. It is interpreted as a will to change the situation through ‘real estate reform’ by wiping out allegations of Daejang-dong in the full-fledged presidential campaign after the launch of the election committee next week.

Candidate Lee visited the construction site of the Seongnam Industrial Complex No. 1 neighborhood park on the same day and said, “Except for essential real estate, high-ranking public officials will introduce a blank trust system like stocks and create a system that sells them all or consigns them to forcibly sell them.” He added, “We will introduce a real estate acquisition pre-screening system for low-level and intermediate public officials and public officials who may be involved in urban planning and national development plans. We will implement the policy.” The election committee also announced that it would make these contents an official policy of the party candidates.

In addition, it also suggested △applying exceptions to the issuance limit of public bonds or local bonds during public development and introducing infrastructure for development profits, △disclosure of publicly-led housing site development and construction costs, and △recovery of development profits through the sale price ceiling system. It is a calculation to imprint the image of a ‘propulsive candidate’ in real estate reform.

He emphasized that the Neighborhood Park of the 1st Industrial Complex in Seongnam City was a ‘representative achievement’ during the days of Seongnam Mayor. It is said that from the time of civic group activities in Seongnam, they insisted on creating a park for the citizens of the old town rather than housing land on the site of the 1st Industrial Complex. Accordingly, it is explained that after the re-election of Seongnam Mayor, in relation to the 1st Industrial Complex Neighborhood Park project, the Daejang-dong developer had to pay the full cost of the development to the ‘combined development’ method. Candidate Lee said, “At the time, the available budget of Seongnam City was less than 300 billion won, and the creation of a park costing 270 billion won could not be done forever with citizens’ taxes.” 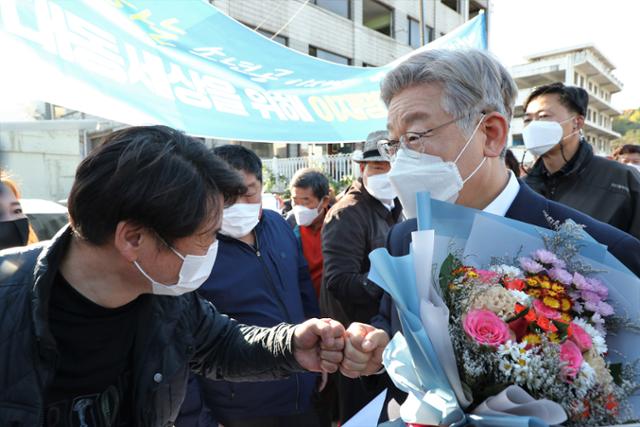 Lee Jae-myung orders the party to “attack, not defend”

However, as if conscious of the cold public opinion on the ‘Daejang-dong suspicion’, he said, “I am very sorry and regretful that there are deviations from some of the people involved.” In fact, concerns were raised that the Democratic Party might fix the image of ‘Daejang-dong = Lee Jae-myung’ to the site visits related to the Daejang-dong project.

Nevertheless, this candidate made a clear counter-attack stance. Kim Byeong-wook, who visited the scene together, asked the head of the task force to find out the truth about the construction corruption in Hwacheon Daeyu, the Democratic Party of Korea, saying, “I want you to cross the line and attack, not to defend.”

Candidate Lee also pointed out that the mayor of Seongnam, belonging to the Grand National Party (predecessor of the People’s Power), gave permission for private development of the site of the Industrial Complex No. 1 as a site for residential and commercial complexes. He argued, “The people’s power that prevented public development politicians shared the development profits, and instead of a 5 billion won club, a 50 billion won and 70 billion won club would have been created.”

The people’s power, claiming that Lee was the ‘body’ of the suspicion of large intestine, criticized Lee’s actions. Former Prosecutor General Yoon Seok-yeol, a presidential candidate for the People’s Power, said in a commentary, “People will remember the myth that ‘the criminal always appears at the crime scene’.”

On that day, the scene was crowded with supporters of Lee and those who opposed him. Supporters cheered for Lee by hanging banners that read, ‘Citizens of Seongnam welcome the Daejang-dong Combined Development Industrial Complex No. 1 project’, while some citizens opposed Lee with a sign saying, ‘Stop the investigation of Lee Jae-myung.’

[Contending for seat in the Legislative Council]At the...

Yesteryear… Forest protection-fire prevention and other 31...