▲ Volleyball players Lee Jae-young and Da-young Lee, who were caught in the controversy of school violence, are moving from Incheon International Airport Terminal 1 to the departure hall to join the Greek league PAOK Thessaloniki on the afternoon of the 16th. 2021.10.16 Yonhap News

Lee Jae-young and Lee Da-young entered the Incheon International Airport departure hall late on the afternoon of the 16th. The two enter Greece via Turkey. The Greek women’s professional volleyball A1 League kicked off on the 9th.

Sisters Lee Jae-young and Da-young agreed to join PAOK last summer, but only now left the country due to delays in the issuance of the International Transfer Agreement (ITC) and work visa.

Lee Jae-young and Lee Da-young were identified as perpetrators of school violence in February of this year and lost their place on the domestic stage.

At the time, Heungkuk Life Insurance, which was their team at the time, immediately imposed an ‘indefinite suspension’ in mid-February, and on June 30, gave up registration of players for the 2021-2022 season. 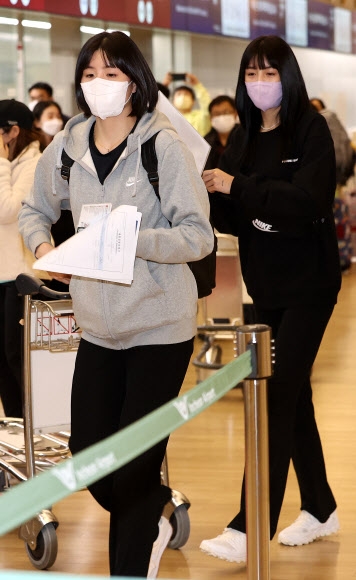 ▲ Volleyball players Lee Jae-young and Da-young Lee, who were caught in the controversy of school violence, are moving from Incheon International Airport Terminal 1 to the departure hall to join the Greek league PAOK Thessaloniki on the afternoon of the 16th. 2021.10.16 Yonhap News

However, the Korea Volleyball Association refused to issue ITCs for the twin sisters, citing its own regulations regarding international transfers of players, which stipulated restrictions on the qualifications of domestic players to advance overseas.

In the player international transfer regulations, the Volleyball Association states, “Persons who have been subject to disciplinary action from volleyball-related organizations such as the Korea Olympic Committee (KOC), the Association, and affiliated federations and whose execution period has not expired, (sexual) violence, match manipulation, military service evasion, etc. It is stated that the qualifications for overseas expansion are restricted for those who have caused social scandal or caused serious damage to the volleyball world through unsavory acts.

The twin sisters who received the ITC had a consular interview for issuance of a work visa at the Greek Embassy in Korea on the 12th and obtained the visa.

At the airport, the twin sisters only said “I’m sorry” to a reporter’s question, but the sister’s mother, Kim Kyung-hee, a former national volleyball player, said to her daughters, “raise your head” and “come up”.

Lee Jae-young and Lee Da-young, who have resolved all the documentary issues for participation in the Greek A1 League, plan to coordinate their A1 league debut after joining the team training after arriving in Thessaloniki. It is known that the two will receive a net salary of 60,000 euros (Lee Jae-young, about 82 million won) and 35,000 euros (Dayoung Da-young), about 80% lower than last season.

MY continues to support entrepreneurs during the COVID-19 crisis, ready to go through floods to help flood victims Phra Nakhon Si Ayutthaya Province

Ulsan Seol Young-woo, in his second year of...

Perhaps India is on the verge of...