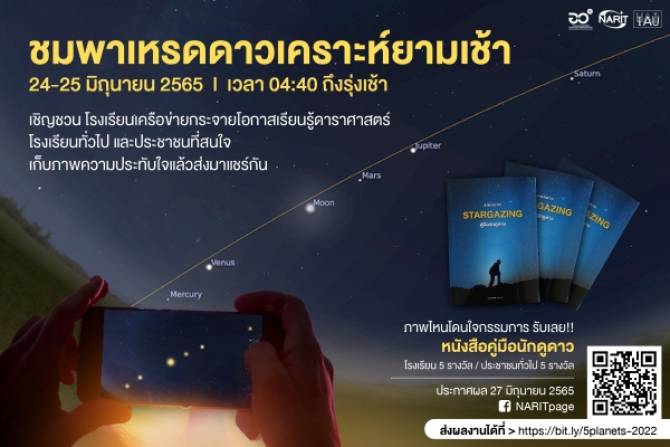 Prachinburi news reporters reported that they were notified by the Public Relations and Communications Organization of the National Astronomical Research Institute. (Public Organization) Ministry of Higher Education, Science, Research and Innovation (TSU) invites to watch the parade of 5 planets before dawn on June 24-25, 2022. Mercury, Venus, Mars, Jupiter and Saturn line up above the sky. with the moon in the east from about 4:40 AM until dawn It is a celestial phenomenon that occurs infrequently. If the sky is clear and cloudless, it can be observed with the naked eye in every region throughout Thailand.

Suparek Krihanon, director of the Academic and Astronomical Communications Service Center, said that before the dawn of June 24-25, 2022, five planets, consisting of Mercury, Venus, Mars, Jupiter and Saturn, will appear together. in the eastern sky line up following the path of the sun’s motion with the moon It began to be observed with the naked eye from around 04:40 onwards until the sun rose from the horizon.

The planets appeared in the sky at the same time. and line up like this caused by each planet orbiting in a position that can be seen at the same time from the point of view of an observer on Earth As for the view from space, the planets are not aligned in a straight line at all. Because each planet is scattered around the orbit of that star. Opportunities to align themselves appear to observers on Earth at the same time. Therefore, it is a phenomenon that occurs infrequently. Especially the appearance of up to 5 stars if the sky is clear without rain clouds. Thai people will have the opportunity to see the beauty of the astronomical phenomenon before dawn. all over the country

PSU invites network schools to spread learning opportunities for astronomy General schools and interested people Share your impressions of that morning with the activity “Watch the Morning Planet Parade”, win a “Guidebook of Stargazers” totaling 10 prizes (5 prizes for schools and 5 prizes for the general public). https://bit.ly/5planets-2022 From now – June 26, 2022 and results announced on June 27, 2022 via Facebook, National Astronomical Research Institute, Mr. Suparerk concluded.