Top Posts
PV Sindhu: World Badminton Tour Finals; PV Sindhu...
Hu Hongjun wants to meet Cai Sibei for...
Pope Francis arrives in Greece from Cyprus: A...
scolding the Permanent Secretary of the Subdistrict Administrative...
Max Verstappen “There is no gain for a...
‘Shah Rukh Khan scolded me when I lost...
Great reversal… Yesterday (3rd), the ending of ‘Clothes...
Samsung Foundry to Benefit from Competitor TSMC
Three people, including a couple in their 50s...
Four deadly shotguns Parents were also charged. Michigan...
Home Business Lifelong active duty practice as a founding job… “Be prepared for the risk of living long without money”[서영아의 100세 카페]
Business

Changhee Kang, CEO of Truston Asset Management Pension Forum
‘Re-employment’ as the head of the investment education research institute after retirement… Financial education for retirement planning for customers for 20 years
YouTube lecture ‘Bank of Old Age’ has 2.47 million views… Don’t live like you don’t exist after 80
Misunderstanding the idea of ​​’children will guarantee my old age’… Start preparing for the second act of your life from the age of 40 at the latest
Kang Chang-hee, CEO of Truston Asset Management’s Pension Forum, puts into practice the theory that ‘lifetime active service is the best retirement plan’. Even now, at the age of 74, he goes back and forth between two offices, sharing his knowledge of retirement planning and retirement wherever he asks. By Lee Hoon-gu, staff reporter [email protected]

Kang Chang-hee, CEO of Truston Asset Management’s Pension Forum (74), is talking about this a lot these days. Let’s hear a little more explanation.

“First of all, there are many people who think that they do not exist after the age of 80. Everyone should prepare and prepare to live to the age of 100. You have to think about saving for the future, throwing away face, and doing chores. Secondly, the last few years before death are very painful and difficult for most people. At this time, you will suffer from financial problems and loneliness. Third, your children do not guarantee your old age. I have to get rid of the vague misconception that if I invest heavily in my children, my old age will be guaranteed.”

It is a relentless ‘fact bombardment’ for those who thought old age was a little easy. He visited his personal office on the 14th and was full of books and materials related to retirement that he had collected over decades.

○ Create a craze for investor education through financial education

CEO Kang Chang-hee is literally a pioneer in Korea’s retirement and investment education. In 2002, after serving as the CEO of an asset management company twice, he suddenly declared a full-time job in the field of ‘financial education’ and moved to the head of the Investment Education Research Institute. “It’s a kind of ‘re-employment’. While dealing with clients, I realized that investment training was necessary before asset management. There was no way to convince investors of long-term diversification.”

In a situation where financial investment was only perceived as ‘jae-tech’, he preached asset management for life design, long-term investment, savings-type investment, and diversified investment, creating a craze for investor education throughout the industry. At the same time, the era of low interest rates and an aging population was coming. Requests for lectures flooded in from all over the country. His advice for old age, ‘Prepare for the risk of living long without money’ and ‘Prepare from a young age what you can do for the rest of your life,’ has penetrated to such an extent that it is a classic for people in this field.

“The first time I saw the term ‘lifelong risk’ was when I was serving as the CEO of an asset management company. An American named Timothy McCarthy, who was my advisor at the time, gave me a book titled ‘Japanese, Awaken Your Money’, and the table of contents had the phrase ‘longevity risk’. He said, ‘Just like we buy life insurance to cover the risk of dying prematurely from an accident or illness, we have to invest to protect ourselves against the risk of living too long.’ I used up all my money thinking I would live until I was 80, but if I live to be 100, it’s usually not a difficult task.”

He is demonstrating his theory that ‘active service is the best measure for old age’. Even now, at the age of 74, he goes back and forth between the office of Truston Asset Management and the office of a private corporation in Yeouido, Seoul, visiting wherever he asks for a lecture. However, as I interrogated him with a smile, there were a lot of things that were done mostly for talent donation.

“How nice it is to have a job. That someone wants to listen to me and can help them.”

The three obstacles tormenting old age are money, health, and loneliness, and work is the cure for this. Taking it one step further, he recommends giving up cool and stylish jobs to young people in old age, and looking for jobs that can be enjoyed for a long time, even if it is a chore.

The recently published book ‘From fifty, you should live without worrying about old age’ (Forest Books) contains the hope that the younger generation will read it. The paradigm for preparing for retirement has changed. how to survive It’s not rosy, but if you’re well prepared, it’s not as gray either.

○ ‘The time has come when children are poorer than their parents’

He gave up to 320 lectures a year until just before the COVID-19 crisis. After the lockdown due to the corona crisis, a new world called YouTube was opened. In October last year, CEO Kang appeared on Sampro TV, a YouTube economic broadcaster, and a video related to ‘old bankruptcy’ recorded 2.47 million views. Here, he talked about the ‘three misconceptions that ruin old age’ introduced above.

In addition, he emphasizes that ‘the most remaining investment for the young generation is to focus on their job right away rather than financial technology’. In an era of low interest rates, raising one’s monthly labor income by 1 million won is the same as having 1 billion won in assets. He also says to build a safety net with the triple pension of the National Pension, Retirement Pension, and Personal Pension for old age.

“Especially, the retirement age of an employee depends on the management of the retirement pension. In the United States, the number of ‘millionaire retirees’ is increasing. This is thanks to the 401K, a US defined contribution (DC) retirement pension system, and the booming US stock market. There are a lot of cases where it is.”

○ Create a life work and found a job 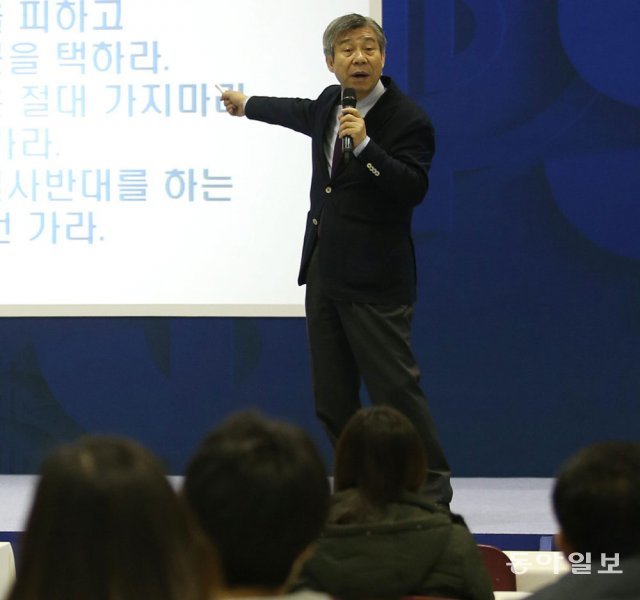 CEO Kang giving a lecture on ‘Lifestyle design and asset management in the age of 100’ at the 2014 Dong-A Smart Finance Expo. Dong-A Ilbo DB

For him, the past 20 years of focusing on financial education have been the process of ‘creating a job that did not exist before’. He has worked between securities companies and investment trust companies such as Daewoo Securities and Hyundai Investment Trust. It was a groundbreaking event at the time when the term social contribution was unfamiliar.

In 2004, he moved to Mirae Asset and worked as vice president and head of the investment education research institute. This, too, was something he proposed to the company. After working at Mirae Asset for 9 years, he retired at the age of 65 at the end of December 2012. Since 2014, he has been serving as the CEO of Truston Asset Management Pension Forum.

Financial education is far from immediate achievement or making money, but it has a different meaning.

“I worked with a good manager who did not ask for immediate sales. I was lucky.”

Instead, the reputation and influence of the organization he belonged to, and the familiarity felt by the public would have grown.

What he always emphasizes is ‘child risk’. It is pointed out that Koreans will spend the last years of their lives miserable if they go all-in to their children without thinking about their old age. He pays private education expenses, wedding expenses, and business expenses, and emphasizes that there are a lot of elderly people living in jjokbang. If the children who have grown up like that can’t even get a job, their billionaires are bound to collapse. This is what he calls ‘child risk’.

“The number of seniors receiving help from their children is currently around 23%, but it will decrease further in the future. Just ten years ago, this percentage was close to 40%. In developed countries, most of the income in old age comes from pensions, and the income from children is only 0.4 to 1%.”

However, in Korea, with the exception of civil servants, teachers, and military personnel, the public pension alone is insufficient to sustain a basic life in old age. This is why it is necessary to secure a fixed income for old age as much as possible by establishing a three-tier pension structure of retirement pension and personal pension. The reason he emphasizes reducing investment in children is that an era of low growth and deprivation is opening up due to demographic changes.

“The number of children who are not born at least 300,000 a year cannot feed the elderly generation, which is increasing by 1 million every year. Here, as a global phenomenon with low growth, the generation of children is poorer than the generation of parents. If each of us does not reincarnate, we will have no choice but to fall together.”

○ Prepare for old age, start at a young age

He explained, “planning the life cycle” about preparing for retirement and preparing for old age. It is to think about and prepare for the lifelong dream, achievement goal, and cycle until the end of life, and the earlier you start, the more options and less difficult it is.

He said, “I want you to think about the second act of your life at least in your 40s and live without worrying about old age from your 50s. Now is the earliest time to think that it is too late.”

No Yoo-jeong and Lee Young-beom Divorce Because of an affair?… Suffering from hardship

Ethereum Down 10% In Bear Market By Investing.com

MAKRO shares open for subscription on the first...

The proportion of “I will sell my apartment”...

The reversal card that will surpass TSMC is…...

Vaccine approval main procedure all at once…...

Even procrastinating marriage… Loss of 1 billion...