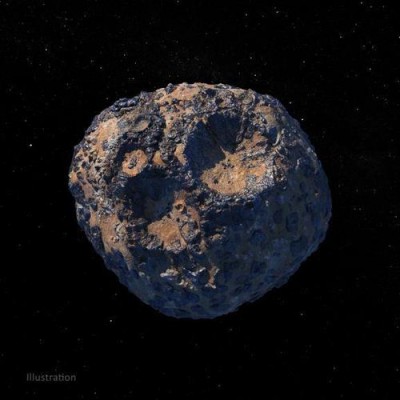 Research results suggest that ’16 Psyche’, which has been attracting attention as a ‘gold mine asteroid’ because it is made of only lumps of iron and nickel, also contains materials other than metals, such as silicate, which is the main component of the rock.

A radio telescope made the most detailed map of heat emission and analyzed the composition of the surface, showing that, although it is rich in metal, it is not an all-metal asteroid.

According to the Massachusetts Institute of Technology (MIT) and foreign media, a team led by planetary scientist Dr. Saverio Cambioni of the University of America analyzed the surface material of 16 Psyche using observation data from the radio telescope ‘ALMA’ installed in northern Chile. was published in the ‘Journal of Geophysical Research: Planets’.

ALMA, installed in the Atacama Desert in northern Chile, is an array of radio telescopes composed of 66 12-meter-diameter and 7-meter dish antennas to observe celestial bodies with millimeter and sub-millimeter wavelengths.

The research team created the most accurate heat emission map based on the data observed by ALMA on June 19, 2019, 16 Psyche, and through simulations for each region, they found materials that emit the same heat.

As a result, it was found that although the surface of 16 Psyche, an M-type asteroid with a diameter of about 220 km, is rich in metal, it is covered with various materials, and there is a difference in the ratio of metals and silicates by region. This is interpreted as raising the possibility that the silicate-rich mantle existed at the beginning of the asteroid’s formation and then disappeared.

The team analyzed the rocky area as traces of an ancient mantle formed by a cosmic collider, and suggested that the metallic material in the crater was ejected early during the core cooling process, supporting previous findings.

“16 Psyche’s surface is very diverse,” said Dr Cambioni. “This map confirms that the metal-rich asteroid is an interesting and enigmatic world, which is yet another reason to look forward to ‘Psyche’ to explore this asteroid.” .

The National Aeronautics and Space Administration (NASA) spacecraft, named Psyche after the asteroid, was launched on August 1 and reached the asteroid belt between Mars and Jupiter in 2026, approaching 16 Psyche in four different orbits over about 21 months. will explore on your own.

Psyche is named after the lover of Eros in Greek mythology, and the number 16 means the 16th asteroid discovered.

The sound of gunfire still echoed across the border. 50 Myanmar soldiers were killed, many more injured.
Posted onJune 29, 2022June 29, 2022