Monica explains tattoos full of meaning towards 父 “My mother is crying..”

“I wanted to get rid of preconceived notions.”

Proudman dancer Monica revealed the tattoo engraved on her body and explained the meaningful meaning.

On the 23rd, GQ KOREA’s official YouTube channel posted a video titled ‘Genre and meaning of tattoos revealed by Monica’.

In the video, Monica seriously explained the meaning of the tattoos on her body. Monica introduced the ‘deer’ tattoo as the first tattoo to be engraved. Monica said, “I thought about it for about two years. The deer resembled his father in appearance, and it was so good that the meaning of the deer was ‘justice’.”

The next tattoo showed the Chinese character lettering on the arm. Monica said, “It’s a Chinese character for ‘Kang-mok-geun-geun’, and it’s like a guideline that a father gives to his daughter. It is said that a person who is strong, determined, and tenacious is a sage. My father was a calligrapher, so he gave me a frame (make it) in the sense that he wanted me to be that kind of person. I wanted to have that frame on the inside of my arm,” he said.

“At that time, it was just before my father passed away. I think I needed something powerful enough to hear my father’s voice even without my father. It was very important not to just be the person I wanted to be, but to be what my father told me. It is written in the words of my father,” he added. 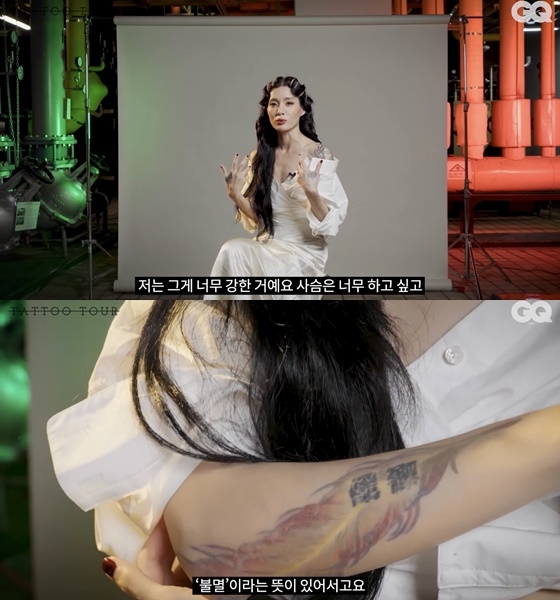 Both hands had lotus tattoos. Monica said, “It’s a tattoo I did after my father passed away.” For this tattoo, Monica went to a tattoo artist with 1-2 years of experience.

Monica said, “I wanted to receive something like a child’s picturesque heart. The lotus flower also means reincarnation and is a Buddhist term. The lotus flower design was downloaded from the Internet. It was so good. I wanted to put a heavy feeling on a light tattoo rather than looking like it. I wanted to get a tattoo with a smile. Even though my father passed away, I wanted to feel as if it could happen to anyone.”

There was also a movement against prejudices in Monica’s tattoos. Although the number of people getting tattoos has increased in Korea recently, prejudice still remains. Monica’s mother also wept when she saw her daughter’s tattoo.

Monica said, “Not all tattooers are good fighters and bad guys. I think I wanted to show that this is a sensual problem and that it is a design art. As soon as I saw the tattoo, my mother cried. There is also a video. It hurt my heart so much, but I wanted to get rid of my preconceived notions even from my mother, so I spoke up confidently as soon as I said it. I hope there will be no preconceived notions.”

“A song that suits you only”…Kunta final stage...

The trailer for the second season of the...