[마이데일리 = 김나라 기자] Actor Kim Yun-seok (53) expressed his feelings about working with his junior Jo In-sung for the first time in the movie ‘Mogadishu’.

On the afternoon of the 26th, Kim Yun-seok conducted a video online interview. Various episodes were released ahead of the release of the movie ‘Mogadishu’ (director Seung-wan Ryu) on the 28th.

Based on a true story, ‘Mogadishu’ is a movie about the life-or-death escape of people isolated from civil war in Somalia’s capital Mogadishu in 1991. Before Corona 19, the location was 100% in Morocco, capturing the exotic scenery. “Along with the Gods” was produced by Dexter Studios and “Veteran” Oeyu Naegang, who created an all-time Korean blockbuster.

Kim Yun-seok played the role of ambassador Han Shin-seong, a flexible character with leadership and responsibility at the same time in the play. Han Shin-seong, the Korean ambassador to Somalia, was a person who waged an all-out diplomatic battle to gain the support of African countries before Korea joined the UN in 1990-1991. 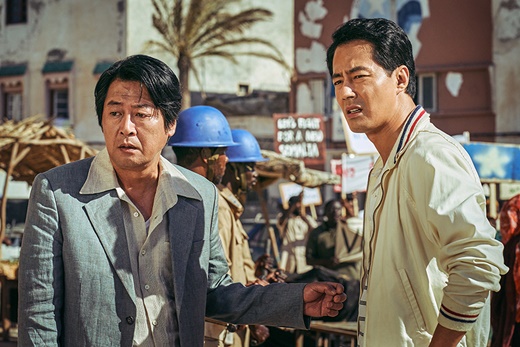 On this day, Kim Yoon-seok said about Jo In-sung, “He’s an actor I’ve liked since ‘Mean Street’. I really wanted to work with him and I wanted to meet him in a humane way. I like Jo In-sung’s acting very unpretentiously, and nevertheless, that’s why I trust him even more. I really liked that style, but when I met Jo In-sung, he was like this person himself. He was restrained, rational, simple, human and good as an actor. Thanks to him, I enjoyed filming ‘Mogadishu’. I did,” he praised.

Kim Yun-seok also remembers filming in Morocco. He said, “It was a familiar place to the point of being confused whether it was filmed or lived.” Heo Jun-ho used to be a barista himself. He air-lifted coffee beans to the staff as well as the actors. Jo In-seong’s room was a treasure trove. There were a lot of food that I brought from Korea. There were a lot of things my juniors and colleagues sent me, but I always shared them all and ate them together. I was on the top floor and there was a balcony, so I gathered all the food and cooked it. I also boiled seaweed soup and grilled meat. I have a lot of memories of drinking beer while eating,” he said.

He continued, “There was nothing difficult about the food. Originally, I like to explore local food, and the local food was good.” He said, “The most difficult thing was Kim Jae-hwa also mentioned, but since it’s over two months old, the children want to see it. But these days, I have a video call again. It’s also going well, so I’ve endured it well,” he added.

Compared with the mainstream NFT market in 2021,...

“Mix Union” joins the discussion and shares the...

#Today Rain Coming # My brother is...