In the video, Jeon Hyun-moo held a bazaar ‘Free Meeting’ at his home, drawing a lot of guests, and angered the viewers.

Previously, last month, the production team of ‘I Live Alone’ planned an absurd hidden camera in Gian 84’s webtoon closing celebration trip, which caused the ‘Gian 84 bullying controversy’. Contrary to the fact that rainbow members said they would attend, only Jeon Hyun-moo attended. Disappointed by this, Gian 84’s appearance got on the air as it was, but he joked about it as a “surprise” and further criticized it. The members silently argued that the reason for their absence was because of the COVID-19 situation.

In the end, the production team said, “We apologize to those who felt uncomfortable even a little bit. The disagreement between the members is not at all true.” “The production team did not take care of it carefully, and it was not enough to explain the situation in detail as we considered various production conditions. We will be even more careful with the production,” he even issued an apology. 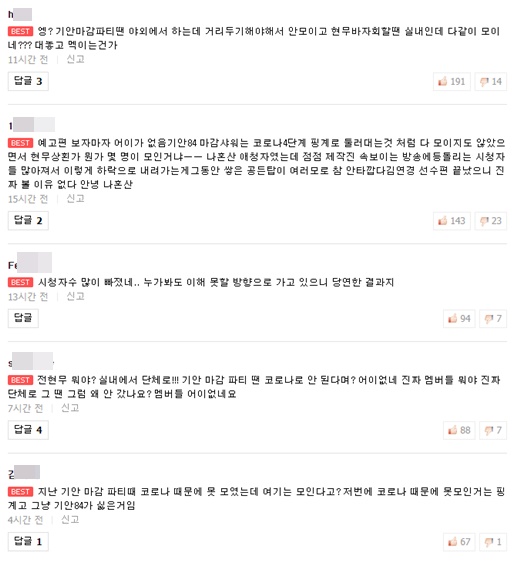 However, ‘I Live Alone’ has caused controversy again within a month with a contradictory attitude. The members who said they did not attend the Gian84 closing party due to social distancing attended a large number of Jeon Hyun-moo’s bazaar held indoors, and critics from viewers continued to follow. Not only Gian84, but also members of the rainbow such as Sunghoon, SHINee Key, Mamamoo Hwasa, and Park Jaejeong, as well as actors Kim Jisuk and Peppertones Jangwon Lee, visited Hyunmoo Jeon’s house. Here, subtitles such as ‘A large number of celebrity guests’ and ‘In the store getting crowded’ flowed, and it showed a different temperature difference from the time of the Gian 84 tour, raising doubts about the situation of Corona 19.

Viewers annoyed at this said, “The 10 year series deadline for Kian84 gathering outdoors is not possible due to Corona 19, and a ‘free party’ meeting indoors is possible? Bullying promotion program”, “In the countryside, if there are more than two people gathering, you will get Corona 19, at home you won’t get Corona 19 even if you gather as much as a group, and if you gather five people in the studio, you won’t get Corona 19? The number is still high, but what are they doing. In addition, the item that Narae Park once did”, “The Gian 84 closing party couldn’t gather because of Corona 19, but they’re gathering here?”, “As soon as I saw the trailer, there was nowhere. The Gian 84 closing party was Corona. 19 Step 4 As an excuse, how many people did the ‘free meeting’ gather when they didn’t even get together?”

Kim Seon-ho, ‘First + Only’ interview after the...

Highlight of my TV career after a tornado...

“This person walking in the Han River wearing...