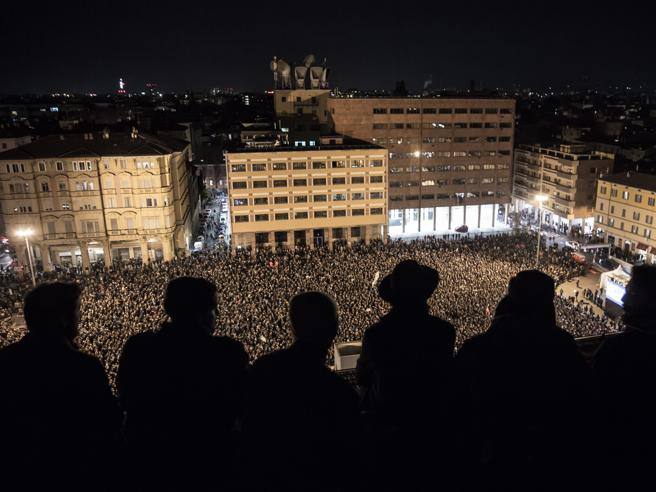 BOLOGNA – This year May 1st fell on January 19th. It was not Rome, but Bologna, it was not Labor Day but that of Sardines. And it was still a concert, an identity event, at least thirty thousand people, many people who had been waiting for a long time to feel part of something. “You are our spark,” said a banner held by a lady from Trento. The city is the same as that of November 14, when it all started, with a flash mob organized by a group of strangers. But if then it was a debut, with all the naivety and the disruptive effect that it entailed, yesterday was a ritual, a consecration to be celebrated among friends, among people who somehow recognize themselves, which certainly must not be convinced in the choice of field. Being there, also as a gesture of superstition, because fears are exorcised better by feeling multitude. And there was a lot of fear in the audience yesterday.

“Do you think she can do it?” Especially the older ones even questioned the journalists, eager for confirmation. Needless to ask who is to do it, it was obvious in this square. “We hope to be so happy next Sunday too” says Sara, a Dams student, who has a residence in Como, so she won’t vote in these delicate Emilia-Romagna elections. Like her, a large part of the public is also out of the office, in the sense that trains have been organized from Milan, Florence, Trento, which certainly have massed, but will not bring votes to the hated challenger Salvini. “I know we can’t lose,” says Mario Ballestrini, “pensioner and companion” from Modena. “But for the first time in my life I have no certainty about our victory.”

Sardines in Bologna, photos of the square and the concert

“If we lose everything becomes more difficult.”

Had it not been for the appeals to the vote that were occasionally dropped from the stage, it would have been difficult to find the atmosphere since the last week before the end of the world vote in the lineup prepared by the Sardinian organization. Between songs, there was time to talk about immigration, gender, the fight against the mafia. Apart from a few sporadic and not too fierce, beaten on Matteo Salvini, the Emilia-Romagna fine vote, albeit looming among the crowd, seemed almost a side note, the pretext to meet again, and not the showdown that it will instead be. “Let’s just say that if we win we can go on” is the comment of a boy with sardine around his neck. “If we lose everything becomes more difficult.” For the secretary of the Democratic Party they are “oxygen for democracy”, while for the venerable Francesco Guccini who received them in his home in Pavana they are “a ray of sunshine, rain on dry ground”.

And with this square full that there was not even a pin, they certainly made “a good blow” as banned by Pier Luigi Bersani. But at the moment Sardines seem able to say what they are not, and what they don’t want. “This crowd is proof that not screaming and not playing dirty can reward you.” At 5 pm, in the Arena del Sole theater, next to the concert square, Mattia Santori and the others issue a first victory bulletin. From which, apart from the pride for the result achieved, we can see a little bit of everything.

They seem to distance themselves from the vote on January 26 next, and from its possible repercussions: «We do not fear a defeat of the left and we do not fear the victory of Borgonzoni either. We are still under construction, but we have already won the cultural battle ». A moment later they claim a possible share of merit in case of victory of the center-left: “If there is a favorable result, we will become an example of a possible alternative to right-wing populism.” In the end Mattia admits, through gritted teeth, that “at this stage our relevance will also depend on the election result”. They were contacted by the top management of M5S, never by Stefano Bonaccini, who also had some interest in doing so immediately. Politics no, at least for the moment. “But let’s be close to politicians who do good things in this mess.”

Life, he says, is not just made up of squares and easy solutions. A boy holds one of the many fish-shaped signs on which we read that Sardines are not silent, they have many things to say. Perhaps they still have to decide what things to say, what choices to make, so little time has passed since their birth. However, they are not made for slogans, for effect phrases. Mattia defines this concert “an epochal turning point for politics”. The combative Modena City Ramblers are playing on stage, “Raise Your Fist Revolutionary Sardina”. They are joined on stage by Bandabardò for a highly attended “Bella ciao”. The public wants more, and asks loudly for the cover of Contessa, that of “companions from the fields and from the workshops”, without obtaining it, a matter of tight deadlines. It was a good party, on which hung a cloud of anxiety. For the rest, and also for the future of Sardines, we’ll see. Starting next Sunday.