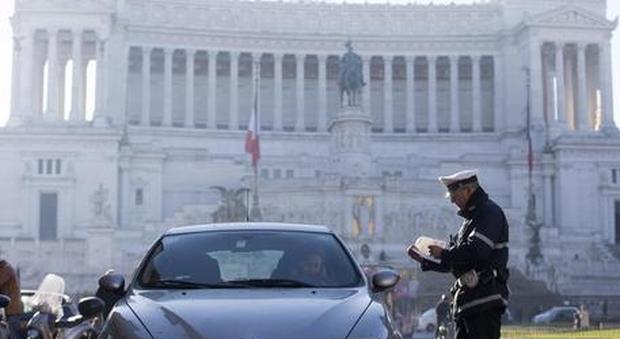 There are no precedents (except for ecological Sundays) in Rome, also because it is smogair pollution had not reached such high and worrying levels in the past three years. Yet the decision feared Sunday and confirmed yesterday afternoon by the Capitol risks blocking the capital. The mayor Virginia Raggi, taking into account the values ​​of fine particles and the levels marked by the individual units monitored in the first few days of 2020 by Arpa Lazio, has decided to block all diesel vehicles, including the least polluting ones – that is, the Euro 6 – for today.

CLICK HERE to monitor the air quality of Rome live

A decision that has no equal even in other Italian cities where in any case these days, the respective municipal administrations have also launched traffic restrictions but – for example in Turin – up to Euro 5 or like Milan up to Euro 4. The situation in Rome, however, seems much more complicated because of the number of cars in circulation, due to the active heating systems and, finally, due to the absence of rains which has lasted for over 10 days.
In the capital – ACI data in hand – almost a million cars will be blocked. Of these, 659,979 are fueled by diesel and despite the interdiction for Euro 3 taken last November (we are talking about 230 thousand cars banned in the areas within the Great Ring Road), the pm10 levels have not improved so significantly.

VALUES
ARPA called it “persistent pollution” and in the first 12 days of 2020 the values ​​recorded by the individual control units touched the stars. Only on Sunday, for example, four out of 13 control units had exceeded the limit of 50 micrograms per day required by law while the others had recorded values ​​that did not drop, on average, below 40 micrograms. Urban areas such as the Tiburtino, for example, and a significant part of the eastern quadrant of the capital were highly polluted.

What “euro” is your car? To find out CLICK HERE

READ ALSO Smog, it’s a red dot all over Italy: stop car from the north to Rome

For ten days out of twelve the control unit has marked values ​​beyond the limit. A record that grows year by year if you think that the Tiburtina control unit in 2018 had exceeded the limits 22 times and last year 32, always stopping below the threshold of 35 exceedances allowed by the rules in force every year but demonstrating how over time, the situation has worsened. It is no better for other areas such as Cinecittà or Prenestino and San Giovanni. In the order signed yesterday afternoon by the first citizen – who raised a crawl space of controversy with environmental associations and opposition groups compact in criticizing the provision – the blockade for private diesel cars will be offset.

THE RULES
To stop for the whole day – from 7.30 to 20.30 – will be the vehicles (including mopeds) Euro 1 and Euro 2. While the Euro 3, the Euro 4 and subsequent (up to Euro 6) will have to stop from 7.30 to 10.30 and from 16.30 to 20.30. Taxis, buses, chauffeurs, ambulances and many other categories have been exempted. Limitations also for heating systems: ignition for a maximum of 8 hours (and no more 12) with levels not exceeding 18 degrees. Obviously, the provision states that the controls will be guaranteed, entrusted to the local police. It is difficult to believe that it is possible to block and fine all potential irregular workers considering the number of agents on duty and the tasks that will still have to be guaranteed. In essence, the whole body or almost – considering the perimeter of the ban – should be used to avoid possible (and perhaps certain) irregularities.
Always the mayor Raggi – already last Sunday – suggested to citizens to move around the city using public transport means but the ATAC will not guarantee an increase in travel. On the road there will always be the same buses that do not reach 1,400 daily and which in any case in 60% of the cases are powered by diesel oil since just 400 vehicles walk using natural gas and electric vehicles do not reach 30 units.