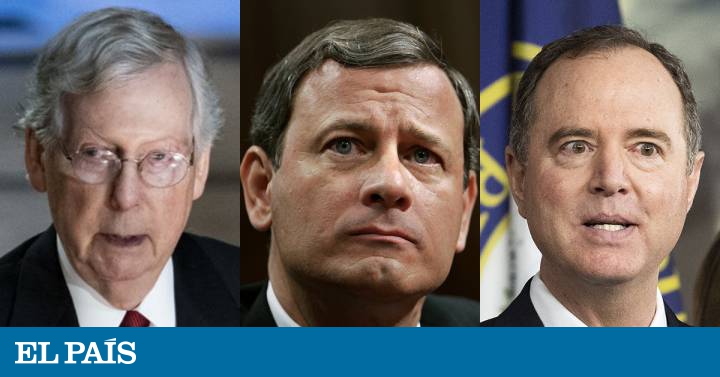 The third impachment in American history formally begins this Tuesday in the Senate. President Donald Trump faces two charges, one of abuse of power for pressuring Ukraine to allegedly harm his political rival former Vice President Joe Biden and another of obstruction of Congress, for hindering the investigation into the case. Nine congressmen and lawyers will lead the political trial in Washington.

There is no one more hated by the Democratic Party than Mitch McConnell, a Kentucky senator and leader of the Republican majority in the Senate. From that position, it was an obstructive nightmare in the last years of Barack Obama. His most momentous maneuver was the blocking of the confirmation of Judge Merrick Garland, whom Obama had appointed to fill a vacancy after the death of a conservative magistrate in the Supreme Court. McConnell left the position empty throughout 2016 until the presidential election. Trump’s victory allowed Republicans to appoint a conservative judge. Today there is a conservative majority court thanks to that. McConnell is 78 years old and has been in the Senate for 35 years. The relationship with Trump was crashed at first. McConnell even said that the president did not understand how the legislative process worked. In the impeachment process, he has openly declared that he is coordinating with the White House about the strategy to follow.

The White House lawyer since October 2018 is characterized by keeping a low profile. He was part of the team that prepared the Republican during the 2016 election campaign and also advised him legally when special prosecutor Robert Mueller conducted the investigations on the Russian plot. Although he does not have extensive trial experience, he has participated in complex high-profile litigation. He was one of the great defenders of the president making use of his executive privilege to not collaborate with the Democratic investigations into the Ukrainian scandal that triggered the impeachment and argued that White House personnel were not obliged to participate in interrogations on their conversations with the president. His discreet personality is well received among Catholic conservatives.

Unlike Pat Cipollone, Jay Sekulow, one of Donald Trump’s oldest personal lawyers, is accustomed to the media focus. The host of the radio show “Jay Sekulow Live” is usually a recurring guest on Fox News programs, where he defends the president’s actions. He is the principal legal representative of the American Center for Law and Justice (ACLJ), which was born in opposition to the American Civil Liberties Union. As an attorney for the ACLJ, he has been in charge of defending Trump in his crusade by keeping his tax returns hidden. He has appeared at least a dozen times before the Supreme Court to argue cases, several of them on religious freedom, but he is not a specialist in constitutional proceedings. Sekulow was one of the key lawyers in Trump’s defense in the investigation of the Russian plot.

The emeritus professor of the 81-year-old Harvard Law School, usually represents characters that transit between fame and power. The former American football player O.J. appears in the customer list. Simpson and the millionaire Jeffrey Epstein, accused of sex trafficking and who committed suicide last July in a Manhattan jail. Virginia Giuffre, one of the tycoon’s victims, testified before the court that Dershowitz had sex with her when she was a minor. The octogenarian lawyer has flatly denied those statements and even published a book entitled Blame for indictment: the challenge of proving innocence in the era of #MeToo. The frequent appearances of Dershowitz in Fox News captivated the interest of the president. He will be responsible for presenting the initial allegations in the Senate, and according to a statement from the legal team of the president, he voted for Hillary Clinton in the 2016 elections.

This is not Kenneth Starr’s first political trial. In the nineties he was the special prosecutor who led the investigation into a business of Bill Clinton that led to an impeachment against the Democrat for the Lewinsky case in 1998. That year, Time magazine named Starr and Clinton as “Man of the Year.” Then, Donald Trump labeled the lawyer as a “madman” and a “lunatic.” Now Starr is part of his defending team. Like Dershowitz, Starr was part of the legal team of millionaire Jeffrey Epstein in the mid-2000s. He later moved to the private sector, serving as dean of the law school of Pepperdine University and then president of the University from Baylor. In 2016 he was expelled from office for his mishandling in the scandal of sexual assault accusations involving members of the soccer team.

Robert Ray is a lawyer and legal analyst at the head of the United States television right. Fox News viewers have already seen him argue against the impeachment of the president, saying that the articles presented by the Democrats have no basis, as Trump did not commit a crime. The political world remembers Ray on the opposite side. In 2000, he took over the investigation into the Whitewater scandal when special prosecutor Kenneth Starr resigned, with whom he will now share equipment in Trump’s defense. A derivative of that investigation was what triggered the impeachment of President Bill Clinton. Ray was criticized for trying to extend the investigation as much as possible in order to prosecute Clinton when he stopped being president.

The president of the Supreme Court will be the third judge to lead an impeachment in the history of the United States. The conservative assumed as a member – and head – of the highest court when he was appointed by former President George W. Bush in 2005, replacing Judge William Rehnquist, of whom he was his assistant. His role in the Trump political trial is seen by several as a litmus test of the impartiality with which he must exercise his position. In his career, before reaching the Supreme at age 50, he interspersed jobs in the Department of Justice, the White House and the private world. In 1981 he went to work in the office of the attorney general during the term of Republican Ronald Reagan and then was part of the Bush administration. When he served as a lawyer in a private office he represented large corporations, such as international car manufacturers or the National Mining Company.

The president of the Justice Committee of the House of Representatives was responsible for making history on December 13 when he read the impeachment articles aloud to present them to the plenary for voting. On Tuesday, January 21, Jerry Nadler will once again have a stellar performance in this process when he presents the arguments of the accusation before the Senate. Nadler, 72, is a New Yorker who represents the western part of Manhattan for almost three decades. In this time he has faced Trump. In his last campaign, he presented himself to the electors as a “constitutional expert” and as “the strongest member of the House to lead an impeachment.” The Democrats did not know that the case would be presented to them so soon. “I don’t feel like a constitutional crisis,” Nadler told The New York Times at the end of 2017. “But I do want to protect the constitutional order, protect the people and the democratic system. Yes, if we are going to have that fight, I would like to be in front. ”

Perhaps the unexpected Democratic political star of the Trump era was Adam Schiff. He is 59 years old and is the congressman from Hollywood, Burbank and northeast Los Angeles. Schiff is a former federal prosecutor who in 2000 acceded to the House of Representatives after defeating a Republican who had precisely been a member of the accusation team in the impeachment against Bill Clinton. Last Friday, it was he who read the articles against Donald Trump in the Senate. If Nadler is the constitutional expert, Schiff was the prosecutor who led the investigation of the facts. As chairman of the Intelligence Committee, he has dealt with all the investigation of the Russian plot. First, fighting against the obstructionism of the Republicans when they had a majority in the Committee. As of January 2019, when he had control, he led the final stage of the investigation. He was always skeptical about Trump’s impeachment, until the president of the House, Nancy Pelosi, authorized his Committee to investigate the scandal of Ukraine.

The new wealth test for immigrants will affect the US economy.

“Then the Gotthard will be closed in no time” – Switzerland: standard