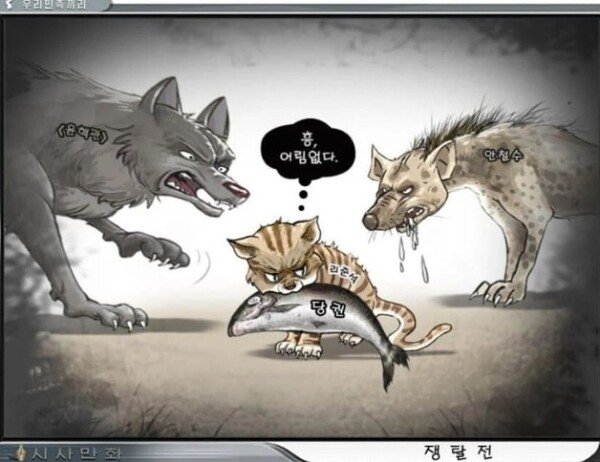 North Korea’s Internet propaganda media, ‘Between Our People’, recently released a current cartoon (cartoon) comparing the ruling party, the power of the people, to the struggle for power.

Representative Lee is portrayed as a cat trying to protect the fish (party authority) while watching between the wolf Yun Hee-kwan (a key person in Yun Seok-yeol’s side) and Seung-nyang-i (Ahn Cheol-soo).

Among our people, President Lee drew sarcasm as a cartoon, saying that it was because of the ‘party authority’ that Lee had a nervous battle with lawmakers Chin Yun who wanted to launch Dandelion and Rep. Ahn Cheol-soo over the issue of adding a top member.

On the 20th, CEO Lee Jun-seok sarcastically said, “It’s an honor to even appear in a North Korean cartoon,” and then ordered, “Don’t worry about North Korea.”

At every opportunity, Chairman Lee dismissed the mid-term resignation speculated by some, saying, “I will keep my term of office,” while saying, “I will not sit still if the party feels that it is in danger,” and he said, “I will not stand still,” and will either re-enter the 2023 National Convention, support a specific candidate, or They have expressed their will to oppose.