(Pyongyang Rodong Sinmun = News 1) = North Korea unveiled a new intercontinental ballistic missile (ICBM), the Hwasong-17, at a parade commemorating the 75th anniversary of the founding of the Workers’ Party of Korea held at Kim Il-sung Square in Pyongyang on October 10 last year. [국내에서만 사용가능. 재배포 금지. DB 금지. For Use Only in the Republic of Korea. Redistribution Prohibited]

Recently, as questions about North Korea’s will for denuclearization have been raised one after another at home and abroad, the argument that South Korea should strike a ‘balance’ through independent nuclear armament is rising again.

The South Korean government expressed a negative stance on the theory of ‘independent nuclear armament’ by some at home and abroad on the grounds that “it violates the Nuclear Non-Proliferation Treaty (NPT) and may lead to a result that gives justification to North Korea’s possession of nuclear weapons.” situation there.

However, given that North Korea does not hide its intention to be recognized as a ‘nuclear state’ by the international community, it is also pointed out that “Is it reasonable to believe and wait for the US nuclear umbrella and North Korea’s ‘will’ to denuclearize without our own reliable means of ‘deterrence’? it’s non-stop 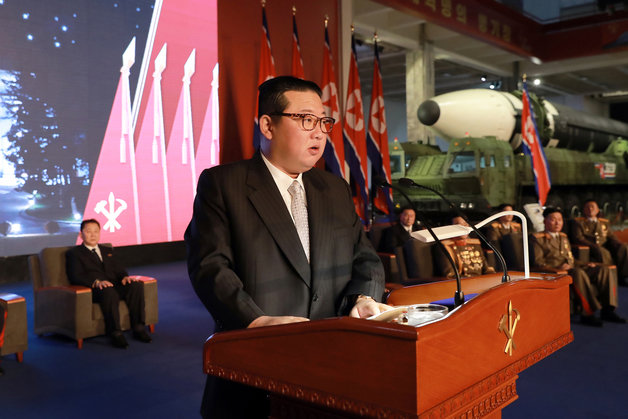 (Pyongyang Rodong Sinmun = News 1) = North Korean leader Kim Jong-un delivers a speech at the opening ceremony of the Defense Development Exhibition ‘Self-defense-2021’ held at the 3rd Revolution Exhibition Hall in Pyongyang on the 11th. [국내에서만 사용가능. 재배포 금지. DB 금지. For Use Only in the Republic of Korea. Redistribution Prohibited]

In particular, among the missiles that North Korea test-fired this year, it includes a new tactical guided missile (an improved version of the short-range ballistic missile KN-23), a new long-range cruise missile, and the hypersonic missile “Hwasong-8,” which is believed to be being developed for the purpose of carrying a nuclear warhead.

North Korea’s development of such new weapons is based on the Δlightweight and tacticalization of nuclear weapons and Δvarious tactical nuclear weapons in accordance with the ‘Five-Year Plan for Defense Science Development and Development of Weapons Systems’ established at the 8th Congress of the Workers’ Party of Korea presided over by General Secretary Kim Jong-un in January this year. Experts say that it is also related to tasks such as development.

In particular, among experts, North Korea’s recent hostile policy and the withdrawal of the so-called ‘double standard’ from the ROK and the US governments, which are demanding the resumption of dialogue, are also “recognized as a nuclear weapons state to take sanctions at the UN Security Council level.” Intention to neutralize” is being interpreted.

In this regard, Joseph Detrani, who served as the US State Department’s special envoy for North Korea, said in an article on The Hill on the 17th (local time), “If North Korea recognizes its possession of nuclear weapons, other countries in the region, including South Korea and Japan, can also decide to possess nuclear weapons.” To prevent this, he stressed the need for “the complete, verifiable and irreversible denuclearization of North Korea (CVID)”. South Korea and Japan, where the North Korean nuclear threat still exists, can only be anxious by providing a nuclear umbrella from the United States.

In the midst of this, some argue that the US government should completely support Korea’s independent nuclear armament.

Professors Jennifer Lind and Darryl Press from Dartmouth University in the US diagnosed that the ROK-U.S. alliance is having difficulties due to North Korea’s strengthening of nuclear capabilities and the rise of China He cited South Korea’s support for nuclear armament as the “best way” to solve this problem.

In accordance with Article 10 of the NPT (each country, when exercising its sovereignty, has the right to withdraw from this Treaty if an emergency under any of the issues in this Treaty jeopardizes its best interests), on the grounds of North Korea’s illegal nuclear development and its threat. Professor Lind and others argue that if the US officially withdraws from the NPT and the US acknowledges it and helps South Korea develop nuclear weapons, then the way can be opened for South Korea to independently secure nuclear deterrence while maintaining the ΔKorea-US alliance.

Chicago Council on International Affairs (CCGA) President Ebo Dalder, who served as the US ambassador to NATO (North Atlantic Treaty Organization), also said, “South Korea and Japan have security guarantees such as the US nuclear umbrella,” during a video discussion hosted by the Center for Strategic and International Studies (CSIS) on the 14th. As trust in the measures decreases, we have no choice but to consider measures such as self-nuclearization.”

Chairman Dalder also suggested that the US establish an ‘Asia Nuclear Planning Group’ (ANPG) to closely discuss an extended deterrence strategy against the North Korean nuclear threat with its allies in the region, including South Korea and Japan. 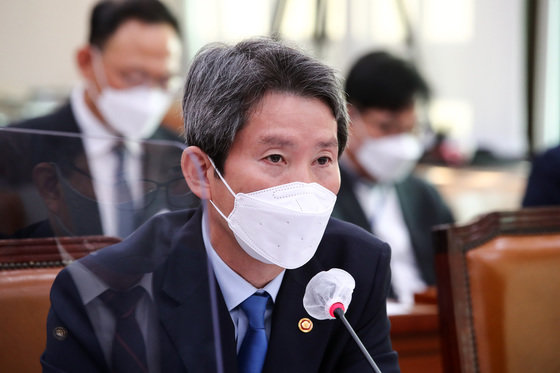 Unification Minister Lee In-young answers questions from lawmakers of the opposition and opposition parties at the National Assembly’s Foreign Affairs and Unification Committee audit on the 18th. 2021.10.18/News1 © News1

However, Minister of Unification Lee In-young, in response to the National Assembly’s Foreign Affairs and Unification Committee audit on the 18th, dismissed the question about Korea’s independent nuclear armament as “it is not a wise solution.” In the above audit, he said that resolving the North Korean nuclear issue diplomatically is “a common opinion not only of the ROK and the United States, but also of the international community,” and expressed a negative stance not only on Korea’s independent nuclear armament but also on the relocation of the US Forces Korea’s tactical nuclear weapons. The solution to the North Korean nuclear issue must be found within the framework of the ‘denuclearization of the Korean Peninsula’.

In response, a military source said, “If the US redeploys tactical nuclear weapons to South Korea or promotes NATO-style nuclear sharing, it will inevitably face strong opposition from China and Russia. As it can mean recognizing nuclear weapons, it will bring about a significant impact on the situation in the region,” he predicted.

Idukki Dam | Idukki Dam will have to be opened if heavy rains continue; Minister K Krishnankutty

Prof. appeals to 252 travelers from Africa who...

Japanese government: “If you do not make a...

The Commander-in-Chief of the NESDB has notified all...

First case of Omicron confirmed in the United...

UN secretary-general says virus has no borders on...

China spying on journalists By categorized by traffic...

First confirmed case of Omicron mutation in the...

Rihanna has been named ‘national heroine’ after Barbados....

Per capita lags behind, technology is low,...

I was pierced by a North Korean...