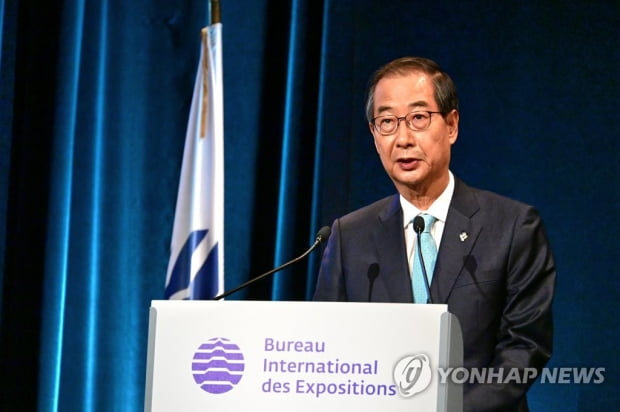 For 5 days 3 nights, there were only 10 official interviews… Election campaign for 170 member countries
After the PT, 4 minutes and 40 seconds of speech… The only French-speaking city among competing cities

On this visit, which was the first diplomatic stage since taking office, Prime Minister Han handled a tight schedule, including announcing the competition (presentation, PT) to bid for the 2030 Busan Expo (World Expo), as well as interviews with ambassadors, ministers and BIE managers from each country in succession.

From the 19th to this day, Prime Minister Han visited France for 3 nights and 5 days, and met with the ambassadors of BIE member countries one after another to appeal for support for the 2030 Busan Expo.

On the 21st, the second day of the General Assembly, Busan, Rome (Italy), and Riyadh (Saudi Arabia) announced the competition in turn with representatives of 170 BIE member countries in attendance at the Palais de Congress event.

At the Busan PT, which was given a total of 20 minutes, Prime Minister Han stood on the podium for 4 minutes and 40 seconds.

In his announcement, Prime Minister Han emphasized that “Korea is a country that can serve as a bridge between developing and developed countries.”

“Korea has grown into one of the world’s top 10 economic powerhouses by overcoming difficult problems such as war, poverty, and economic crises since the mid-20th century,” he said. do,” he said.

A former ambassador to the OECD (Organization for Economic Cooperation and Development) in Paris, the prime minister spoke in English and French.

Among the three countries participating in the competition, Han was the only one who spoke French directly.

The last of the PT was decorated with a 15-second video of President Yoon Seok-yeol, who promoted the bid in English.

The first presentation of the 2030 World Expo bid was held on video in December last year in the aftermath of Corona 19, so this was the first face-to-face competition announcement.

From the first face-to-face announcement, the Korean government has put forward a strategy to emphasize the new government’s will to host the Expo to BIE member countries by having Prime Minister Han personally appear on the podium.

The venue for the 2030 Expo will be finally decided in November next year after submitting the bid plan, the third announcement, the on-site inspection, and the fourth and fifth announcements in that order. .

Prime Minister Han met with reporters the day before the PT and said, “I thought it would be good to quickly show that the Korean government has a clear will to host the Expo.” “The timing has been pushed forward,” he explained.

Before and after the PT, Prime Minister Han took time apart to meet with the ambassadors of each country and directly requested support from Busan.

The number of representatives from each country and the BIE director alone that Prime Minister Han met formally during a business trip for an election campaign reached 10.

On the 20th, the second day after his arrival in Paris, he met with Robert Clark, chairman of the 2027 Minnesota Exhibition Bidding Committee.

Prime Minister Han explained the symbolic meaning of Busan, especially the fact that it overcame poverty during the Korean War and became a logistics and digital center.

Immediately after the PT on the 21st, I had a series of meetings with TJ Seocolo, Ambassador of South Africa to France, Tatiana Matic, Minister of Trade, Tourism and Communication of Serbia, and Catherine Colonna, Minister of Foreign Affairs of France.

On the evening of the 21st, the ambassadors of four countries from the Commonwealth of Independent States (CIS) and Mongolia had a dinner meeting.

On the 22nd, the last day of the visit, I had a meeting with BIE Secretary-General Dimitri Kerkentez.

In addition, Prime Minister Han attended a banquet on the American side, which is promoting the 2027 accreditation fair, and requested support from each other, and also attended an event for Koreans to ask for support from Koreans.

Prime Minister Han met with a group of reporters on his way home, and said, “Many people seemed to appreciate it quite highly, saying, ‘The Korean delegation was the only delegation who spoke French, not English.”

Chey Tae-won, chairman of the Korea Chamber of Commerce, and Busan Mayor Park Hyung-joon, who served as the private chairperson of the Busan Expo bid, also accompanied and strengthened the visit.

An official from the Prime Minister’s Office said at a briefing, “Prime Minister Han explained the meaning of the Korean PT at the beginning of all talks. Ryeo was trying to explain what Busan looked like,” he said.

The official said, “The ambassador of a country was ‘impressed.

Korea’s themes coincided with its own priorities.

“I heard everything I wanted to hear,” he said.