Top Posts
Swimming satisfied with the performance of youth athletes...
Look at the news comments Bella quit Weir,...
Powell considers ending tapering “a few months early”...
Riding a motorcycle in the middle of the...
Moderna CEO: “Vaccine effectiveness is negative”… The New...
Gangwon FC’s ‘Choi Yong-soo’s defensive tactic’ shined in...
what happened? ‘Kub-Jfin-Six’ falls sharply, opening an abnormality...
Will the Opposition overthrow the BJP? But Congress...
Expo 2020: UAE National Day; You can visit...
The effect of a mirror selfie of figure...
Home World “Orange circular-shaped pillars of fire soared”… The identity of the ‘Eye of Fire’ that appeared in the middle of the sea
World 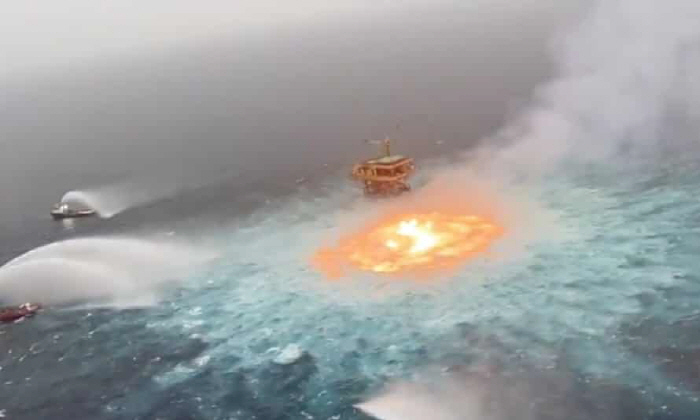 An orange circular flame erupted in the middle of the western sea of ​​the Yucatan Peninsula, which juts northeast from Central America towards the Atlantic Ocean.

The Guardian reported on the 2nd (local time) that a fire broke out at the Pemex oil field in Mexico.

According to the Guardian, a fire broke out at around 5:15 a.m. on the same day in the sea near the Kumalup Jaff oil field owned by Pemex in the western sea of ​​the Yucatan Peninsula.

The fire was completely extinguished at 10:15 a.m. in five hours, and fortunately there were no casualties, Pemex said.

The Guardian, citing local media reports, explained that the ‘Eye of Fire’ appeared, saying, “It looked like molten lava boiling.”

Local media reported that on that day, a flame suddenly broke out on the sea and the flame spread in a circle. He said that the fire was located only 130 meters away from the oil rig, so there was a risk of a large explosion.

A PEMEX official said, “We urgently dispatched a firefighting team to the fire site to prevent additional fires.”

“The cause of this fire is presumed to be an underwater pipeline,” Phemex said. “It appears that the gas leaked from the pipeline caused the spark.”

However, he added, it is not yet known what kind of material burned in a circular shape above the water.

Meanwhile, Angel Carizales, head of Mexico’s oil safety regulator ASEA, tweeted that “there were no leaks in this fire.”

Kumalub Jaff is Pemex’s largest oil producer, accounting for more than 40% of its daily production of about 1.7 million barrels.

Survey of women with driving excellence |...