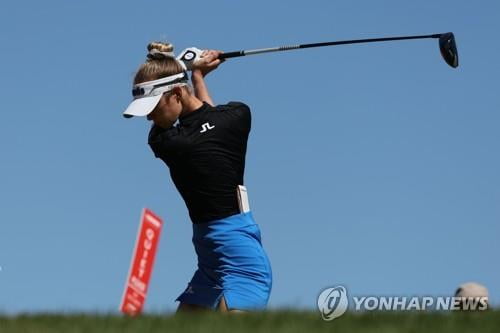 Coda hit a 6-under-par 66 with two eagles, three birdies, and one bogey in the third round of the tournament held at Blyderfield Country Club (par 72, 6,638 yards) in Belmont, Michigan, USA on the 19th (Korean time).

Koda, who cut six strokes only in the third round, recorded a total of 18 under par 198 over three days, beating Jennifer Cupcho (USA), who was leading the second round by one stroke, to lead the solo.

Koda, who won this tournament last year, recorded her first birdie on the 7th hole (par 3) and then caught an eagle on the 8th hole (par 5) in succession, revealing the possibility of defending the title.

He paused for a while on the 13th hole (par 3) bogie, but after making up for the at-bats with a birdie on the 14th hole (par 5), he finished the third round with a solo lead by making a thrilling eagle putt on the last 18 hole (par 5). .

Coda, who had not competed for a while after undergoing surgery for thrombosis in March, showed off her strength by finishing tied for 8th at the US Women’s Open before her comeback earlier this month.

After returning, Koda, who showed good skills in the second tournament, Meyer Classic, is expected to start a full-fledged ranking competition with Koh Jin-young (27), who is ranked No.

Cupcho, who led the second round, reduced three strokes to four birdies and one bogey, but finished the third round with a solo second place (17-under 199 strokes) behind Koda.

Cupcho, who won his first win at the Chevron Championship, a major event in April, has never been in the top 10 in six competitions since then, but is aiming for his second championship this season.

Lee Min-ji (Australia) and Lydia Ko (New Zealand) finished the third round in a tie for fifth with a 13-under 203 shot.