Top figures from around the world and heads of international organizations faced each other to respond to the climate change crisis. President Moon Jae-in delivered the opening speech of the ‘2021 P4G Seoul Summit’ on the 30th. “The global transition to a low-carbon economy requires more support from developed countries to developing countries.”And “I will actively cooperate with developing countries as Korea has achieved forest restoration with the support of the international community.”Said.

President Moon Jae-in is speaking at the opening ceremony of the ‘2021 P4G Seoul Green Future Summit’ held at the Dongdaemun Design Plaza (DDP) in Seoul on the afternoon of the 30th. yunhap news

The P4G Seoul Summit is the first summit in climate and environment held by Korea.All. It is held for two days from 30 to 31 under the theme of’realization of a carbon neutral vision through inclusive green recovery’. However, most of the schedules, including speeches from the leaders of each country, were conducted on video due to the corona 19 quarantine.

President Moon also announced a higher level of commitment to climate response, especially through the opening declaration. ▶ Significantly increase the share of climate and green official development assistance (ODA) by 2025 ▶ New Green New Deal Fund Trust Fund established at the Global Green Growth Institute (GGGI) ▶’Nature’ for the success of the 15th Convention on Biological Diversity (held in October) Demonstrated willingness to participate in the’Pledge of Leaders for the Future’, etc. ▶ Reconfirmation of willingness to further raise the national GHG reduction targets to achieve carbon neutrality in 2050 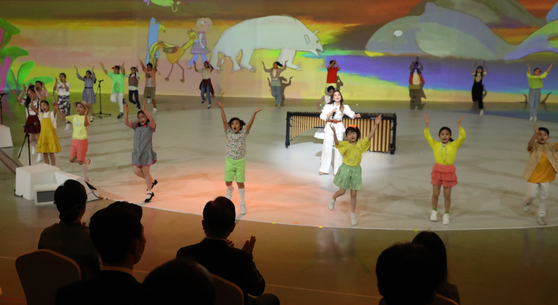 With President Moon Jae-in present, the campaign song’We are One’ is being performed at the opening ceremony of the ‘2021 P4G Seoul Green Future Summit’ held at the Dongdaemun Design Plaza (DDP) in Seoul on the afternoon of the 30th. yunhap news

P4G (solidarity for green growth and global target 2030) is a global consultative body for governments to cope with climate change and achieve sustainable development goals by cooperating with private sectors such as corporations and civil society. It was launched with the intent of cooperating on climate change issues in a way that when the government suggests policy directions and provides initial funding → companies take practical actions through investment → civil society monitors them. In particular, Korea is expected to secure a’climate leadership’ that promotes international cooperation in response to climate change in the future based on this summit.

President Moon Jae-in is holding a special talk with actor Park Jin-hee and broadcaster Tyler Rash at the Blue House on the 12th of the P4G Summit. Blue house

This P4G summit The symbolism of providing a practical roadmap and leading the response to climate change in the first year of full-scale action to achieve the GHG reduction targets that countries must achieve by 2030.Has.

In particular, at the Climate Summit last month, President Moon announced a plan to “add the NDC (National Greenhouse Gas Reduction Target) in 2030 and submit it to the United Nations within this year”, and announced an active step toward responding to climate change. Along with this, Korea plans to establish a Climate Response Fund next year to promote low-carbon conversion of companies and support related R&D projects.

President Moon Jae-in is greeting at a video summit with Danish Prime Minister Mette Fredericsen held at the Dongdaemun Design Plaza (DDP) in Seoul on the afternoon of the 30th. yunhap news

An official from the P4G Summit Preparatory Group said, “This year, as the first year of implementation of the Paris Agreement, the P4G Seoul Summit will provide a foothold for Korea to leap forward as a leading country in responding to the climate environment. We plan to secure international leadership and lead related discussions.”

The schedule of the first day of the summit consisted of an opening ceremony and a speech session in which the leaders of each country expressed their will to cooperate with climate change through speeches. 47 top figures from each country and 21 heads of international organizations such as the United Nations (UN) and the International Monetary Fund (IMF) attend the meeting.It emphasized the need for international cooperation to cope with climate change.

President Moon attended the opening ceremony on this day and held a Korea-Denmark video summit with Danish Prime Minister Fredericsen, who held the first P4G summit in 2018. President Moon and Prime Minister Fredericsen announced in a joint press release after the summit meeting, “We have decided to upgrade the strategic partnership between Korea and Denmark to a comprehensive green strategic partnership.”

On the afternoon of the 30th, the Korea-Denmark video summit held at Dongdaemun Design Plaza (DDP) in Seoul. yunhap news

In the US President John Kerry’s Climate Envoy on behalf of US President Joe Biden attendsdo. At the Korea-US summit on the 21st (local time), the two leaders discussed climate change cooperation as a major agenda, and in a joint statement, “We will cooperate to achieve the 2050 carbon neutral goal and present best practices related to carbon emission reduction. ”And gathered the meaning. Chinese President Xi Jinping and Japanese Prime Minister Yoshihide Suga were also absent. Li Keqiang (李克强) in China and Japan respectively) Prime Minister and Shinjiro Koizumi (Shinjiro Koizumi) Minister of Environment attends the meetingdid. An official at the Blue House met with reporters on the 28th and said, “It is not appropriate to evaluate the governments of each country because it is up to each government to decide which person to attend and at what level.”

U.S. President’s Climate Envoy John Kerry speaks at a press conference held at a hotel in downtown Seoul on the 18th of last month. US Embassy in Korea

On the 31st, the 2nd day of the summit, basic sessions and discussions among the leaders of each country will be held on the basis of five climate change topics such as food, water, energy, city, and circular economy. In the case of the basic session, the event is organized by the Ministry of Environment, Ministry of Trade, Industry and Energy, Ministry of Food, Agriculture, Forestry and Livestock, and Ministry of Land, Infrastructure and Transport according to each theme.

The summit discussion session is presided over by President Moon as the host country’s leader. In this session, there will be discussions on three topics: ▶Green Recovery ▶Carbon Neutrality ▶Private Cooperation.

Meanwhile, President Moon is planning to adopt the’Seoul Declaration’ at the closing ceremony of the summit on the 31st. The declaration will include ▶The need for international solidarity to overcome Corona 19 and the climate crisis ▶Implementation of the Paris Agreement on Climate Change ▶Expanding eco-friendly business management ▶Resolving marine pollution, etc. will be included.

MotoGP: Valentino Rossi reports that he will retire only this season[F1-Gate.com]

Afghanistan future after the US withdraws the risk...

The first defendant in the Hong Kong Security...

“The result of a ‘corona positive’ test on...

March 6, 2021
We use cookies on our website to give you the most relevant experience by remembering your preferences and repeat visits. By clicking “Accept All”, you consent to the use of ALL the cookies. However, you may visit "Cookie Settings" to provide a controlled consent.
Cookie SettingsAccept All
Manage consent