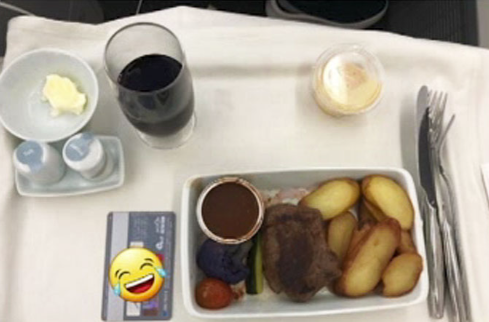 “The steak is the size of a credit card.”

A photo posted on social media on the 13th of a Korean passenger using business class on a Korean Air flight while traveling to Hawaii, the United States, went up and down people’s mouths. I complained that I had to eat such a terrible meal on a plane I paid 6.48 million won (about $5016), but the American online media Nextshark copied it on the 22nd and gave it this title. ‘Shocked’ Korean traveler: Credit card-sized steak served as inflight meal on $5K business-class trip

It was the first time in two years since I was able to travel due to the COVID-19 pandemic, so I was expecting in-flight service. The steak was small and the only thing was fried potatoes with a few slices of vegetables. The passenger took a picture with his credit card next to him for a visual comparison.

“This is a business class steak. It’s amazing to watch again. I am still in shock.”

He also claimed that he and other passengers were not provided with enough blankets and alcoholic beverages. He also said that he had heard that several passengers who were not even provided with steak were even dropped. The man said food appeared to be rationed during the flight, he handed out his grapes with a plastic gloved hand, and the cheese was sliced ​​like sashimi. He said the crew and passengers laughed bitterly at each other after the sound of slicing cheese with a knife and hitting a plate.

However, while listening to the complaints from the passengers, the flight attendants praised that they were positive and always had a smile on their faces. “The crew did their best, so I hope there is no misunderstanding,” he wrote.

The media reported that there have been several recent complaints by passengers flying with Korean Air. One passenger wrote, “It was cold, so I asked for a blanket, and the flight attendant said no and didn’t even say sorry.” It was pointed out that the warm wet towels provided before meals were replaced with disposable wipes, and that no side dishes were provided when ramen was served. There were also reports that fruits and soups were omitted from the in-flight meals.

An anonymous Korean Air flight attendant told a community blind where office workers confide in their difficulties, “Even if we asked for drinks such as cola and juice, we couldn’t provide them. They give you three cups of one drink,” he wrote. “Sometimes boiling water is not enough on long flights. Overseas, there was a shortage of beverages, so the manager ordered a box from the branch, took punishment and robbed his pocket to pay for it.”

A Korean Air spokesperson also posted a post on the blind, but attributed it to the pandemic. “On some overseas routes, this has happened because the supply of in-flight meals has to be done only on the side returning from overseas destinations due to problems such as border blockade and local quarantine due to COVID-19.”

This media did not properly translate the anonymous flight attendant’s post. “Thank you very much for the review. You must have paid a lot of money for a business class ride, but I’m sorry that the steak was the same size as a potato, the cheese was sliced, and the grapes were counted. Obviously, I ordered a steak, but some passengers couldn’t because it wasn’t enough, but our flight attendants want to give it all away. He said in the arrival broadcast that he would take him to his destination comfortably, but even that is embarrassing.”