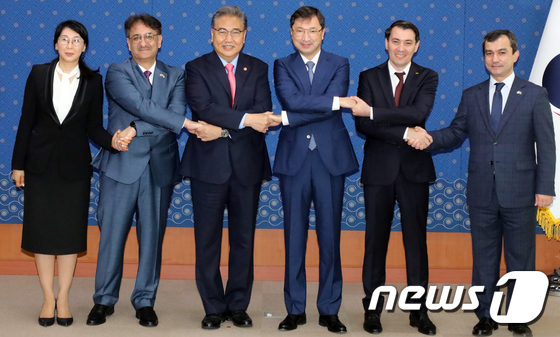 Minister of Foreign Affairs Park Jin said on the 22nd that cooperation with Central Asia is very important for the implementation of the Yun Seok-yeol government’s diplomatic vision of a ‘global backbone’.

Minister Park made the following remarks during a meeting with the Central Asian ambassadors to Korea, including Ambassador Sharif Joda, Ambassador of Tajikistan, Saidov, Deputy Minister of Mission to Uzbekistan, Acting Ambassador of Turkmenistan St Mammedov, Ambassador of Kyrgyzstan Ismailova, and Ambassador of Kazakhstan Duchenbayev to the Republic of Korea at the Government Complex in Seoul on the same day. .

Minister Park said, “I am delighted that the relationship between Korea and Central Asia has deepened in economic, social, cultural and multi-faceted fields over the past 30 years. “He also mentioned.

“Central Asia has always played an important role in Korea’s foreign policy,” said Kazakhstan Ambassador Duchenbayev. “I hope that the new government will pay more special attention to the Central Asian region in the future.”

He continued, “Central Asia is a very strategically important region,” he said, emphasizing that it is geographically between Europe and Asia, and that Central Asia’s role is increasing in regional security, food security, logistics networks, and supply of strategic materials.