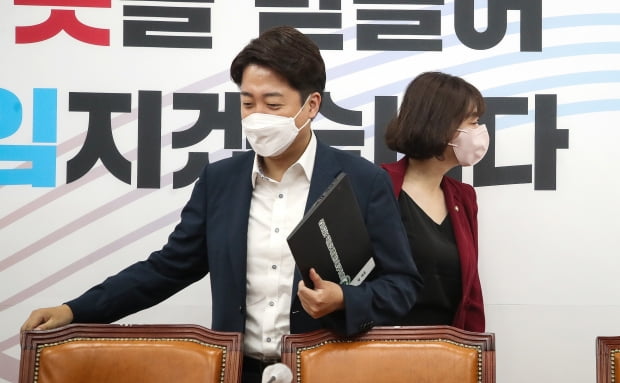 Three days after the clash, they reunited at the highest meeting
Lee waving his hand and refusing to shake hands

On the 23rd, People’s Power CEO Lee Jun-seok and Supreme Councilor Bae Hyun-jin reunited three days after a strong clash over whether to hold an undisclosed Supreme Council meeting. However, Chairman Lee rejected the request for a handshake from Chairman Bae, and Chairman Bae slapped the shoulder of Chairman Lee, who was sitting in his seat. It seems that the gap in the conflict is hardly narrowing down.

Bae, who was seated first in the highest meeting room of the National Assembly this morning, got up and shook hands with Chairman Lee when he arrived. However, Chairman Lee slapped his hand and sat down avoiding the approaching supreme councilor.

After being ‘handshake-passing’, Bae, who finished greeting the other members, lightly tapped Lee’s left shoulder as if hesitantly. However, even at this time, Chairman Lee did not look at Bae Supreme Councilor.

At the time, CEO Lee virtually omitted all remarks and declared that he would not discuss pending issues at the closed meeting, expressing strong dissatisfaction with the spread of the top-level discussion to the outside world.

CEO Lee said, “The highest-level meeting is conducted in two separate parts, the public part and the private part, and there is a situation in which the content from the private part is repeatedly quoted and reported in the media. “If the top members have something to say about an issue, please put it at the end of the public meeting,” he said.

Then, Supreme Council member Bae immediately countered with the purport that “it is not right to not discuss pending issues at all, but to crack down on closed meetings.”

Bae said, “I feel very frustrated every time I hold a meeting with the highest level. It is not a closed meeting, but an ‘unpublished meeting’ at this moment, so that it is difficult for the highest committee members to reveal the truth. “It’s not that we shouldn’t discuss pending issues, but rather, we suggest that we need to crack down on closed meetings more thoroughly and continue the necessary internal discussions within the party in a healthy way,” he said.

After the other top committee members all made their speeches, the conflict between the two became more explicit. Floor leader Kwon Seong-dong said, “Wait a minute, wait a minute,” and arbitrated, but the argument did not stop.

When Chairman Bae said, “What did you leak? You talked the most,” Lee, who left the seat, immediately stopped and said, “Did I leak my story?”