The 11th episode of ‘Penthouse 3’ (written by Kim Soon-ok, directed by Joo Dong-min), aired on the 20th, was based on Nielsen Korea, with an audience rating of 18.2% in the metropolitan area, 18.4% nationwide, and a peak rating of 19.8% for 11 consecutive Fridays. , continued to dominate the weekly overall miniseries viewership ratings. In 2049, a major indicator of advertising officials, it recorded 8.3%, proving its explosive popularity.

On this day’s broadcast, Cheon Seo-jin (Kim So-yeon), who became the next target of the revenge regiment, fell into hell after losing all of her voice and memory as well as being fired from the director. Jong-Hoon Yoon) and the tragic ending in which he crashes while having an argument.

In the play, Seo-jin Cheon hurried to sign a contract with Alex, the older brother of Logan Lee (Park Eun-seok), who expressed his desire to take over Cheong-A Construction when rumors spread that Cheong-A Construction was going to go bankrupt. Alex said that the contract will be signed on the day of the inauguration ceremony of the Chairman of the Chung-A Group, with the condition that if Seo-jin Cheon is involved in a crime, the contract will be terminated.

Seo-jin Cheon, who got money from the acquisition of Cheong-A Construction, devised another plan, saying, “Is there only one last thing left? But Baerona, who was filled with Chun Seo-jin’s brazenness, responded, “I have no intention of going to study abroad. I have work to do while staying here. To restore my mother’s honor.”

At that moment, when reporters came in, Barona said, “Today, I am going to reveal the last picture of my mother, who died under the stigma of being an entrance exam killer.” The black box scene was released. 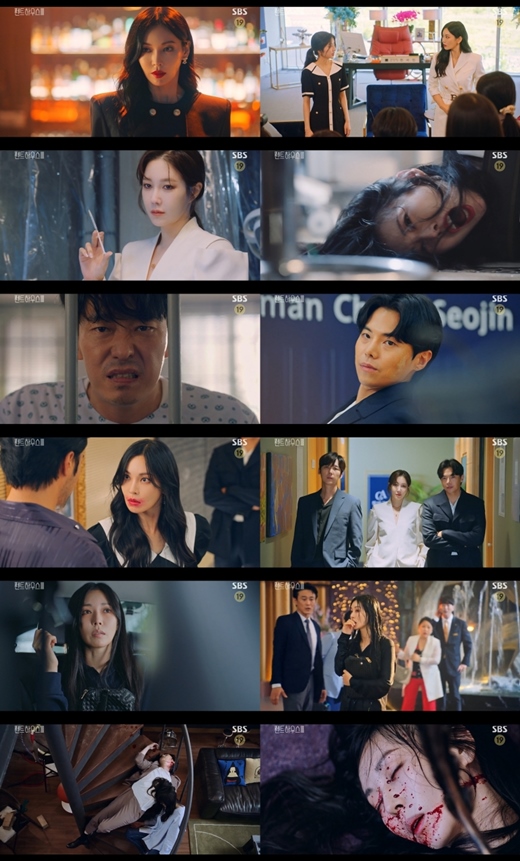 As the black box video spread to the media, Seo-jin Cheon, driven into a crisis, was trembling with anxiety and suspicion that Joo Dan-tae (Um Ki-joon) might have the back part of the black box video that dropped Oh Yoon-hee down a cliff. Even on the day of the inauguration ceremony of the Chung-A Group chairman, Seo-jin Cheon was notified by Alex of the contract termination after being pointed out as the real criminal who imprisoned Logan Lee. I woke up tied up in the place where Logan Lee was imprisoned.

Shim Soo-ryun (Lee Ji-ah), who appeared next, showed the screen behind the black box video of ‘Oh Yoon-hee Murder Case’ and questioned Cheon Seo-jin, but Cheon Seo-jin refused to admit that it was all fabricated. Then Shim Su-ryun foretold severe punishment, saying, “You will lose everything,” and “even your daughter, Ha Eun-byeol, whom you love the most.” In addition, he added, “I’ll take away your voice that tells lies indiscriminately.”

After some time had passed, Seo-jin Cheon, who managed to escape, headed to the conference room where the inauguration ceremony of the Cheong-A group was held, but met Logan Lee, who she thought was dead, and only then realized that everything was planned by Soo-Ryeon Shim, Logan-Lee, and Yun-Chul Ha. . In the end, Seo-jin Cheon took the lead

‘Jin-Ho Jang’, a Chinese movie painted during the...

It was too late to even know the...

Am Chutima recalled minutes of shock and...