“I drank it believing that it was the nation’s mineral water, but it’s maggots. I can’t believe it anymore.”

A foreign substance, believed to be a swarm of maggots, has been found in a bottle of a famous brand called ‘national mineral water’ in China, causing a stir.

Foreign media such as Hong Kong’s South China Morning Post on the 25th local time reported that on the 23rd, Xiaojiang, a woman in her 20s living in Wuhan, Hubei Province, China, found a large amount of maggots in a bottle of water she recently bought at a mart.

The bottled water that Xiaojiang purchased is a Nongfu Sanquan product, which is called ‘national bottled water’ in China, and is a famous product sold all over China.

In the video that Xiaojiang posted on Weibo, the ‘Chinese version of Twitter’, a white foreign substance that looks like a living maggot and an unknown black substance are floating together in a new, unopened bottle of water.

Xiaojiang claimed that this black substance floating along with the white foreign body was an egg of a worm.

He added, “I bought two bottles of bottled water together, and a lot of white larvae and live maggots were found in both bottles,” he said. 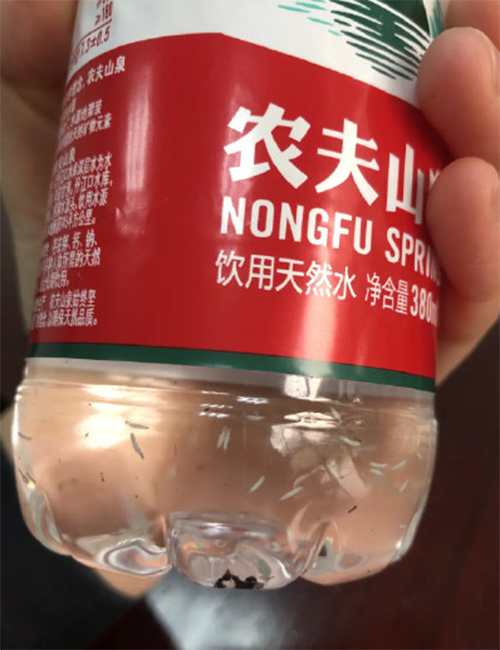 As the video in question quickly spread online and the controversy grew, Nongpu Sanquan posted on the official SNS, “Strict sterilization and filtering are carried out in all processes of product production.” There is virtually no possibility of causing problems with the product.”

Meanwhile, it turns out that this isn’t the first time the bottled water product has been controversial.

In 2013, the appearance of foreign substances floating in the source of bottled water and a huge amount of household waste lying around the water source were also exposed through the local media.

The following year, there was also a report that the company’s standard for passing bottled water itself was lower than that of tap water.