Police raid the source of pirated movies and AV movies young engineers arrested Hundreds of thousands of mediums worth 21 million. 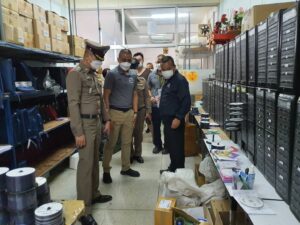 However, the arresting officers investigated until it was found. A group of smugglers selling DVD/Blue-Ray discs pirated movies via online channels a lot. It was found that the website www.Blurayman.com that illegally sells pirated movies, both Thai movies and abroad Including pornographic movies as well. Later, it was investigated until it was discovered that such website There is a source of production and storage at a house in Charansanitwong Road. Therefore, a search warrant from the Intellectual Property Court was brought before the search and arrest was made.

Investigating Mr Sarayuth, the accused confessed that He graduated from Computer Engineering. come from an institute Knowledge of website creation So I used to make my own website. to download pirated movie files from various websites through the program Before being recorded on a DVD disc, advertised for sale through the website. The money for the product will be transferred through a bank account. that he has hired other people to open for 5 accounts, has been made for 5 years, with a selling price of 60-170 baht per movie, each day will sell for about 5,000 – 6,000 sheets, a month will sell for about 3 million baht

See also  Jinyoung, a handsome man who appeared in front of Kim Go-eun... reunion at the mart

Mr. Sarayuth testified that Ms. Nantapa is an employee acting as an admin Waiting for orders and delivery Therefore, he was sent to the investigative officer, Kor Kor. 1, Election Commission of Thailand, to prosecute others’ copyright infringement for commercial purposes by dubbing, modifying, selling, offering, selling, having for sale the film. without permission and for commercial purposes or by commercializing, producing and distributing pornographic films or lewd things.”

“Candy” was shocked to see “Bum” sleeping in...

‘Susie Susira’ opens up after her fiancée’s death,...

Yang Yoseob, the reason for the absurd school...

Isn’t it honeymoon time … Sania and...