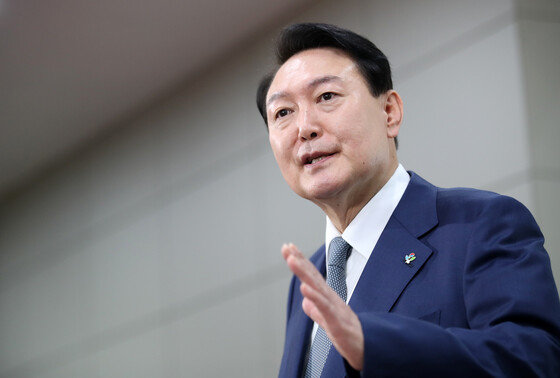 President Yoon Seok-yeol answers questions from reporters during a door stepping session held at the presidential office in Yongsan on the morning of the 24th. President’s Office Photo Reporters

President Yoon Seok-yeol said on the 24th that the Ministry of Employment and Labor announced the 52-hour workweek reform, “It was not announced as an official position of the government.”

President Yoon met with reporters on the way to the Yongsan presidential office on the way to work this morning and said, “The labor community is protesting against the 52-hour workweek reform among the new government’s labor policy announced yesterday by the government.” No, the Deputy Prime Minister told the Ministry of Labor that they should review the flexibility of working hours with the advice of perhaps a private research group or such people,” he said.

President Yoon said, “Yesterday, I requested the National Assembly to resend the hearing progress report on the candidates Park Soon-ae, Kim Seung-hee, and Kim Seung-gyeom (joint chief of staff candidate). To the question of whether I will appoint an appointment even if I have been to NATO and the National Assembly is not formed,” he replied, “Well, I have plenty of time… Normally it took 3 days for re-sending, but it seems like 7 days.

President Yoon will be the first Korean president to attend the NATO summit to be held in Madrid, Spain on the 29th (local time) and on the 30th.

President Yoon is scheduled to meet with leaders of 10 countries at the NATO summit. According to the presidential office, President Yoon expressed his will to ‘burn himself’ for the national interest. President Yoon told reporters, “Since many leaders from Europe and Asia are coming, I think we can talk about various issues related to Korea and export-related issues if necessary.”

The National Security Office said that President Yoon could meet with the leaders to discuss semiconductors, nuclear power plants, defense projects, and new and renewable energy, and to start sales related to exports.

When asked whether the strong rebuke of the police the day before (23rd) over the issue of ‘personnel’ correction of the police chief of police force pressured the resignation of Commissioner Kim Chang-ryong, he said, “I have a month left in office, is that important?”

When North Korea announced that it had deliberated on and approved major issues to expand and strengthen its war deterrence, and the prospect that it would soon make a decision related to the 7th nuclear test, President Yoon said, “We need to figure out what the specifics are.” North Korea’s trends and (response) are thoroughly prepared,” he said.

When President Yoon said, “There is a serious conflict within the party, such as the disciplinary case against Lee Jun-seok, representative of the People’s Power,” he said, “It is not a matter for the president to mention about party affairs.”