President Moon Jae-in is answering questions from the people’s panel at the ‘2021 Dialogue with the People – Daily Life’ held at KBS on the 21st. news

On the 21st, President Moon Jae-in said about the current government’s real estate policy, “Looking back, I think it would have been better if we had put more effort into supplying housing.” In the early days of the regime, the government focused on suppressing real estate speculation, and thus effectively acknowledged the responsibility for the lack of supply measures.

President Moon said in the ‘Conversation with the People’, which was broadcast live for 100 minutes on KBS that day, “I think it would have been of great help if the February 4 housing supply measures had been prepared and implemented a little earlier.” It was a measure that went all-in on supply to the extent that the government praised it as a “supply shock level.” However, it was delayed, and the effect of stabilizing house prices and jeonse prices was not great. 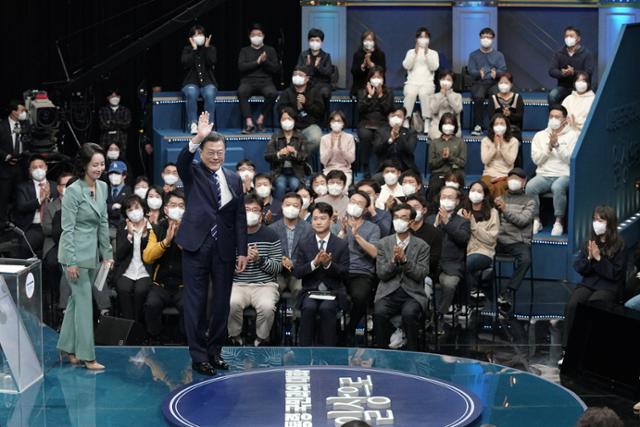 President Moon Jae-in greets the panelists as he enters the ‘2021 Conversations with the People – Daily Life’ held at the KBS Public Hall in Yeouido, Seoul on the 21st. yunhap news

President Moon evaluated the current real estate market as “real estate prices are fairly stable,” and said, “I am aiming to go down and stabilizing for the rest of my tenure.” “I will work hard until the end of my term so that difficulties do not pass over to the next government,” he said.

For President Moon, the controversy over real estate errors seemed to be a ‘bone pain’. When a question about real estate came up in about an hour, the response was “Finally…”, and as ‘the most disappointing achievement during my tenure’, “I gave a lot of deprivation to the common people due to real estate problems.” “It’s a pity that we couldn’t provide enough opportunities for homeless people, young people, newlyweds, etc. to buy their own homes,” he said.

In his New Year’s Address in January of this year, he apologized, “I am very sorry to the people who are very discouraged by the difficulties of housing,” and at a New Year’s press conference, he said, “I did not succeed in stabilizing real estate.” I gave it to you,” he said, lowering his posture in front of the people.

In addition, President Moon said, “The government is intensively reviewing various measures at the government level to recover unearned real estate income and excess profits and prevent private businesses from enjoying excessive profits,” he said. It was interpreted as a remark with the suspicion of preferential treatment for Daejang-dong development in mind. 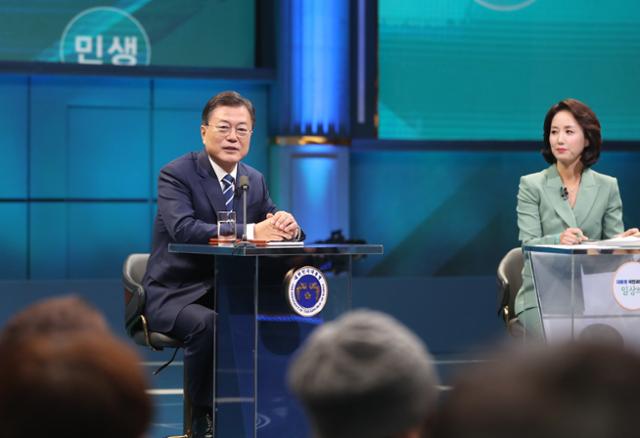 President Moon Jae-in answers questions from national panelists at the ‘2021 Dialogue with the People – Daily Life’ held at the KBS Public Hall in Yeouido, Seoul on the 21st. yunhap news

Regarding the issue of providing disaster relief funds to support the damage caused by the novel coronavirus (COVID-19), he said, “I trust the judgment of the Cabinet,” and virtually opposed the support of the entire nation. He drew a line with the Democratic Party’s presidential candidate Lee Jae-myung, who recently withdrew while trying to push for support for the entire nation. Excess tax revenue, which the Democratic Party was trying to use as a financial aid for disaster relief, announced that it would use it to compensate for damages to the self-employed and small business owners. President Moon said, “I will try to make as much practical compensation as possible.”

Regarding the expansion of the COVID-19 vaccine target to infants and children, President Moon said, “In the United States, vaccination has started from 5 to 11 years old. In Korea, only those over 12 years of age can receive the vaccine.

President Moon also said about the urea water supply crisis from China, “I have regrets that I wish the problem had been identified sooner. done,” he said.

Nara is boiling at 2 points! Scouts...

He Yanlin inspects the inspection and rectification...